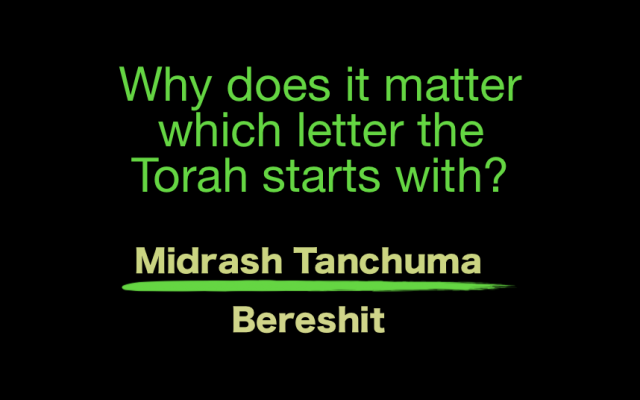 Midrash Tanchuma presents a  deceptively simple question: Why did the Torah start with the Hebrew letter “bet” and not “aleph?” After all, Aleph is “the head or the first, of all letters?  At first glance, the Midrash seems to answer that “bet” was chosen because it is the first letter of the word “Baruch” or blessing, while Aleph is the first letter of the word “arur” which means curse. However, the exact language of the Midrash is a bit more nuanced than that. It said that the letter “Aleph implies a curse,” while “Bet implies a blessing.”

According to Be-er Mamorim – a commentator on Midrash Tanchuma – there is a profound message embedded in this statement. Starting the Torah with the letter “Aleph” is not appropriate because of the numeric value of the letter Aleph. It represents  a quantity of 1 – a state of “bidud” isolation. Aleph is unable to receive the primary blessings that God bestowed on Mankind: “be fruitful and multiply” (Genesis 1:28). After all, when you multiply anything by 1 it remains what it was before. While “Bet,” which is equivalent to the number 2 – is the first number to represent growth and expansion. It is worthy of introducing a world designed to receive blessings. Everything in the world must receive God’s blessing to reach its potential. From a grain of wheat to a newborn baby.

God could have played it safe

Naturally, the question of which letter the Torah starts with, directly impacts what the opening words of the Torah will be.  For absolute clarity the Torah should have started “God created (the world) beginning with the heavens and the earth.”

However, the first words of the Torah “In the beginning (Bereishit)”  can be misconstrued (or manipulated by heretics) to mean that an entity called  “Bereishit” created the heavens and the earth. In fact when King Talmai forced 70 Torah scholars to translate the Torah into Greek  a miracle occurred.  Even though all 70 scholars were isolated from each other, each  translated the first verse the exact same way: “God created, in the beginning, the heavens and the earth.”  Thus avoiding any misrepresentation of God’s singular role as creator of the world.

“Bet” as a preview of how the world works

The Midrash offers another reason why the Torah started with a “Bet” which is a direct message to heretics.

In other words, the first letter of the Torah, Bet – representing the number two,  sets the ground rules for the way God set up the world. It was an instruction manual for life which was encapsulated in one letter. The Torah says not only are there 2 worlds: this world and the world to come, but there are consequences to our actions in this world. How you act in this world will determine whether you merit the world to come. This stands In stark contrast to  the philosophy of  “carp diem” – seize the day. In this approach death is the final act. The play is over.

Defending the honor of the Aleph

One might take away from all this that there is something wrong with the letter Aleph. Quite the opposite, Aleph is called – “the first of all letters” and the first letter of several of God’s names. Aleph comes from the word “Aluf” – which means chief or commander. When we said that the Aleph signifies someone unable to receive the blessing of “be fruitful and multiply,” this a human limitation. The Aleph can start some of God’s names because God is not sustained by the blessing of others like the rest of the world. By the way, the letter Bet is from the word Bayit – a home where people grow and are nurtured.

Can one letter make such a difference

It seems that God’s vision for humanity is captured in one letter. Not surprising when you consider the famous Midrash that God looked into the Torah to create the world, meaning that the Torah is the blueprint of the world.

The Midrash has revealed the power of the very first letter on that blueprint.