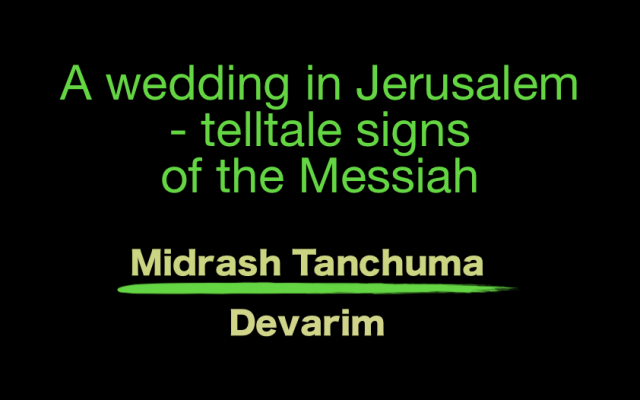 Midrash Tanchuma asserts that all the miracles that the Jewish People experienced in the Sinai desert will be  repeated in Messianic times. But this time in Tzion. (Tzion is the term of endearment used for the Land of Israel at the end of days).

You might expect Manna from heaven, however the Midrash offers more unexpected scenarios. For example, at the giving of the Torah the Jews were miraculously able to visualize sounds. In Messianic times we will once again experience a miraculous sound:

And in Tzion [during Messianic times we will hear] the sound of joy and happiness, [the sound of a groom and a bride…]” (Jeremiah 33:11)

Is there something Messianic about a wedding

What is the relationship between the revelation on Mt. Sinai and a marriage? True, the giving of the Torah is seen as a marriage between God and the Jewish People with the Torah as the Wedding contract. However, in his commentary, Torah Temimah, Rabbi Baruch Epstein offers another explanation of how attending a wedding relates to one’s ability to receive Torah.

The Talmud comments about those who are able to feel deep joy at a wedding:

“Rabbi Joshua the son of Levy said that all who derive true joy from taking part in a wedding meal and make the [Groom and Bride] happy, merit to acquire Torah knowledge.” (Talmud Brachot 6B)

Why should feeling joy at a wedding mean that you have the emotional and spiritual capacity to study Torah? Perhaps because you can look outside yourself enough to feel joy for others. Furthermore, you are able to recognize the miracles of God in seemingly “natural” events.

The Roman Noblewoman who thought she knew better than God

The miraculous nature of a Bride and Groom finding each other is best portrayed in the famous Midrash Tanchuma from Parshat  Ki Tisa. In an exchange between a Roman Noblewoman and Rabbi Yosé the son of Halafta, she asks:

“In how many days did the Holy One, Blessed Be He, create the world?” “In six days,” he replied.… “What has God been doing since that time?” she queried. “(He replied) God has been matching up couples and making one person wealthy and another poor.”

The Noblewoman decided that this so-called divine activity was something she could do herself. To prove her case she took 1000 of her male slaves and arbitrarily paired them with 1000 of her female slaves. The next morning she was forced to concede to Rabbi Yosé the son of Halafta. When she went to check on the marital bliss of her slaves she found most were suffering from broken bones and assorted lacerations due to “irreconcilable differences” with their forced mate.

No weddings. No Torah. No reason for existence.

The commentator, Torah Temima, concludes with another similarity between marriage and the giving of the Torah. Without weddings the world would cease to exist. Similarly, if the Jewish People had not accepted the Torah on Mt. Sinai, God would have returned the world to its primordial state of chaos and emptiness. (Talmud Shabbat 88A)

Now we can understand how the sounds of the giving of the Torah will be heard again. The sounds of a wedding in Messianic days serve as an audible confirmation. Sounds that we can see. A divine signal that we have rekindled the same intensity of joy and happiness in our relationship with God that we once achieved on Mt. Sinai.

Perhaps part of the joy we feel at every wedding is related to the fact that, by its very nature, a wedding is a taste of the world to come.