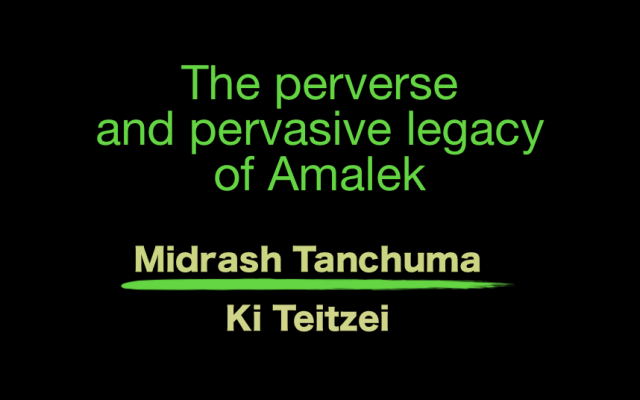 Our parsha ends with the commandment to remember what Amalek did to the Jewish People. Besides their unprovoked attack in the desert, Amalek forever changed the collective consciousness of the world and the Jewish people.

It seems that after the miraculous events of the 10 plagues and the splitting of the Red sea, the surrounding nations considered the Jewish People invincible. No use starting up with them, they seem to have this powerful God on their side. Yet Amalek thought nothing of it.

The classical commentator, Rashi, quoting Midrash Tanchuma,  compares  Amalek’s attack to someone jumping into a bathtub full of scalding water. Although that person suffered burns, he cooled it down for everyone else.

Although Amalek was defeated, their attack opened the door for other nations to follow suit, a course of action that had previously seemed unthinkable.

A perverse display worthy of the Nazis

The Midrash records another case where Amalek’s actions influenced others, but this time it seeped into the psyche of the Jewish People.

When Amalek first attacked the Jews in the Book of Shemot it is described as   “..a war for the sake of God in every generation” (Exodus 17:16)

Midrash Tanchuma spells out a sordid detail which shows that it was indeed a brazen attack on God. When Amalek killed a Jewish man they would cut off his circumcised male organ and throw it towards the heavens.  They would taunt God by saying:

Unfortunately, something equally depraved was committed  by Jews of the First Temple. The prophet Ezekiel provided sketchy details…twenty-five men with their backs toward the Temple of the Lord, and their faces toward the east, and they worshipped the sun toward the east” (Ezekiel 8:16).

Talmud Yuma (77a) fills in the details. The people that Ezekiel was describing were worshiping idolatry (the sun god) in the holy Temple of Jerusalem. They not only had their backs to the sanctuary, they defecated on the Temple mount to show their disdain of God.

Where did such brazen behavior come from? The Midrash says, from Amalek. Once again they opened the door for the world to follow their deviant behavior.

Even the Nazis did not routinely mutilate the circumcised organs of Jews. But the Midrash makes you wonder if there should be a book written about the history of the perverse acts done out of hatred for god.

The only silver lining is that just as acts of vile hatred can build on each other, so can acts of unbridled love and devotion to God. Exactly the kind of self sacrifice that has manifested itself so many times in Jewish history. Starting from our forefathers, and all the way down to family lore that we each have about sacrifices made by our grandparents, not so long ago