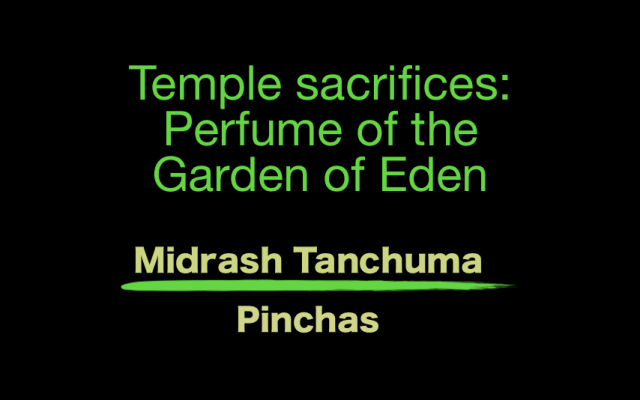 What kind of moral lessons would you expect to learn from the daily sacrifices in the Temple? Controlling your passions? Controlling your actions? How about portion control. According to the commentary, Beer Hamamorim, just like God waits while the Jewish People are “vigilant about bringing the daily sacrifice in its appointed times.” (Numbers 28:4) we too need to pace ourselves when eating and learn to wait.

As is the style of Midrash Tanchuma, another verse is brought to illuminate this idea.

“The righteous man eats until he is satiated, But the belly of the wicked is empty” (Proverbs 14:28)

The Midrash proves that the righteous are satiated after eating very little. For example, Avraham’s servant, Eliezer, asked Rivka for “a little bit of water” (Genesis 24:17) מְעַט־מַ֖יִם while Eisav sold his birthright for a pot of lentil soup.

According to the Midrash, Eisav asked his Brother Yaakov to, literally, pour it down his throat.

Based on the proof of the Midrash, “The righteous man eats until he is satiated” actually means that you should not eat until you’re full. Rather you should learn to be satiated with less. This is reminiscent of Maimonides (Hilchot Deot 3:1-2) who says that you should only eat when you are hungry. Furthermore you shouldn’t fill your stomach, rather stop when your stomach feels three quarters full.

Of course the Midrash isn’t dishing out health tips, instead, the intent is to offer spiritual health tips. To that end the Midrash recounts a story to demonstrate another lesson learned from sacrifices in the Temple:

A certain person made a lavish party for all the people in his city. He invited a Jew named Rabbi Dustrai. The table was made of silver and had every delicacy in the world except for a certain rare nut. Soon as the host realized that this item was missing, he got angry and smashed the exquisite table. When Rabbi Dustrai asked the host why he did this, the host replied:

“You (Jews) say that this world is ours (heathens) and the next world is yours (Jews who believe in a world to come). If we do not [get to] eat now, when will we eat?”

This story sounds like a retelling of Eisav and the lentil soup that we mentioned above. Eisav’s philosophy was that if you are hungry right now, do whatever it takes to secure your food immediately, even if it means trading in something whose only tangible value is far off in the future – a.k.a. his birthright.

In the view of the Midrash however, a Jew should not be so exclusively this-world focused. Rather, we should conduct ourselves properly in this world while being cognizant that the consequences of our actions will impact our portion in the world to come. Even though it’s far off in the future.

Is this the “sweet aroma” that God wants us to have

It seems that how you eat could be a leading indicator of your true spiritual state. Eating too much and too often reveals a strong connection to the here and now. While learning to be satiated with less demonstrates a faith that God will provide the next meal as well. You are living with a next-world consciousness.

We started with the verse in our Parsha “be vigilant about bringing the daily sacrifice at its appointed times.” (Numbers 28:4). But there are two mysterious words which precede that phrase   – “a pleasing aroma.”

The perfume of the Garden of Eden

This phrase is reminiscent of a term used in Genesis when Yaakov came before his father in order to get the blessings. Blessings that did not pertain to the here and now, rather far into the future.

“And he (Yitzchak) smelled his clothes and he blessed him, saying, ‘the smell of my son is like the smell of the fields that the Lord has blessed.” (Genesis 27:27)

The classic commentator, RASHI, quoting the Midrash, says that when Yaakov entered the room his father smelled the perfume of the Garden of Eden.

Perhaps this is the same pleasing aroma that God seeks from us. When we eat to live instead of living to eat. When we embody a next world  consciousness. We show faith that God will continue to sustain us. This reaffirms our belief that this world is simply a “corridor to the world to come.” (Pirkei Avot 4:16)