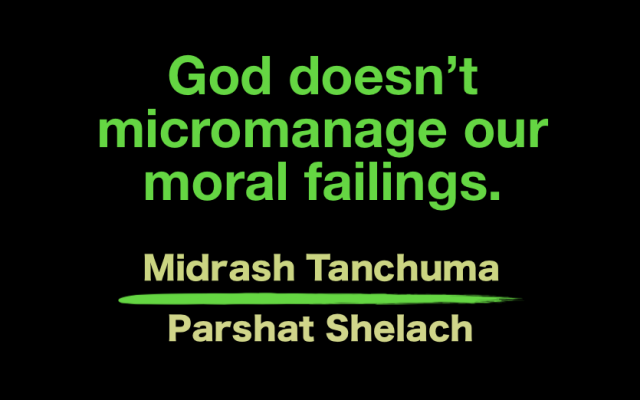 We all know that as a result of the negative report by 10 of the 12 spies, the entire generation of Jews died out in the desert. Plan A was scrapped. Plan B added 40 years to our estimated time of arrival to the Promised Land.

The backstory: Do we trust God’s choices?

Doesn’t our Parsha start out saying שְׁלַח לְךָ that God told Moshe to send out spies? Doesn’t this imply that God and Moshe approved the mission?

The Midrash fills in the blanks. God told the Jewish People that the Land of Israel was אֶרֶץ טוֹבָה a “good land”(Deuteronomy 8:7). The fact that the Jews wanted to send spies was an expression of their lack of faith. The idea of second-guessing God about whether the Promised Land meets everyone’s expectations, cannot go well. This is not a real estate deal, or a travel destination. It’s Jewish destiny.

The Midrash explains it with a parable:  A king chose a wife for his son. She is intelligent, mature, virtuous, and beautiful. However, the prince does not trust his father and insists on seeing her first. The king realizes that if his son does not trust him then his son has not achieved the level of character development and maturity that would make him worthy of marrying her. The king proceeds to show the prince the woman so that he will see she is everything he promised but he lets his son know that now he cannot marry her.

All that’s fine and good but a fundamental question remains.

Why doesn’t God shield us from the painful consequences

Of course, God knew that the episode would end in disaster. Moshe seemed to know that something was amiss as well. That’s why he changed Hoshea’s name to Joshua. The extra letter “Yud” representing God’s name was supposed to protect Joshua from the dangerous influence of 10 of the spies. A commentary on Midrash Tanchuma (Be’er Hamamorim) therefore concludes that the whole story can be summed up with one famous Talmudic dictum: ”ובדרך שאדם הולך בה מוליכין אותו. Meaning – “in whatever direction we want to go, God leads us.” (Talmud Makkot 10B)

That’s a bit sobering and depressing. It means that God doesn’t micromanage our moral failings — not as a nation or individually. God isn’t the parent that protects their child from ever making a mistake. Just the opposite. When we’re courting disaster God says “go for it.”

The story of the spies encapsulates Jewish destiny

Learning from mistakes is a powerful way to grow. Some brave parents do it (although it flies in the face of what a “Jewish Mother” would instinctively do). However, we should take comfort in the fact that what emerges is the truth. God didn’t whitewash the state of our faith. He lets it play out as it was supposed to. The fact that this generation wasn’t ready to settle the land was obvious. No one can ask “why did bad things happen to good people?”

Midrash Tanchuma identifies one of the underlying character flaws exhibited by the ten spies which could very well be at the root of many of the Jewish People’s moral stumblings.  When confronted with the giants the 10 spies thought:  וַנְּהִי בְעֵינֵינוּ כַּחֲגָבִים  “in our own eyes we were like grasshoppers.” (Numbers 3:33). God forgave them for that. However the spies went on to say וְכֵן הָיִינוּ בְּעֵינֵיהֶ  “and so we were in their eyes.” (ibid) For this God could not forgive them. The Midrash explains:

“Do you know what I made you (the Jewish People) in their eyes?

When the giants looked at the spies what did they see? A nation whose God brought the most powerful empire in the world to its knees. A nation who is considered like God’s firstborn son through their acceptance of the Torah.  A nation to whom God promised the very same land these giants inhabited – which puts the giants on a collision course with Jewish destiny.

Who was afraid of whom?

Yet the ten spies were convinced that they were grasshoppers and that the land of Israel was even too difficult for God to conquer.

The Jewish People heard the report and believed it. It wasn’t ten grasshoppers, it was a nation of grasshoppers. (Except for the women whose faith was unshaken).

That’s why God had to let the train careen off the rails. Shielding us from harm that we cause is not the way God runs the world. The message of our Parsha is that Jewish destiny consists of mistakes, consequences and growth.