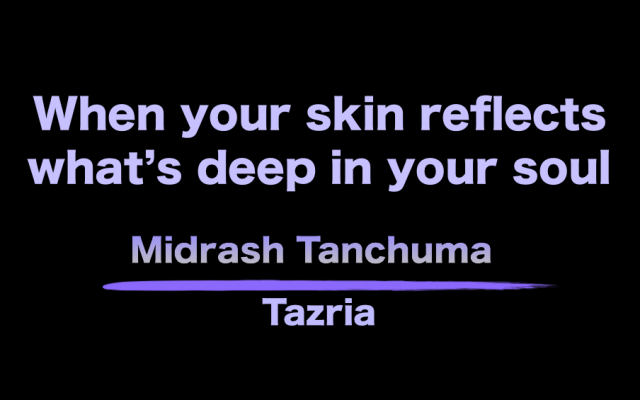 The parshiot of Tazria-Metzora cover a spiritual leprosy of the skin, clothes and walls. Midrash Tanchuma goes below the surface to examine the underlying blemish on the soul. One theme throughout the Midrash is the idea that whatever emerges from ourselves is actually an opportunity for perfection.

Midrash Tanchuma records another of the famous conversations between the Roman Governor, Turnus Rufus, and the Great, Rabbi Akiva. (Keep in mind that it was Turnus Rufus, according to the Talmud, who ordered the sanctuary of the Temple to be plowed under).

It seems that Rabbi Akiva knew the real motive of the Roman Governor. His esoteric question was a thinly disguised attack on the fundamental Jewish principle of circumcision. This is a practice derided by the Greek and Roman empires who venerated the human body.  Rabbi Akiva proved the superiority of man’s works with a simple yet concrete example: G-d’s handwork are sheaves of wheat. Man’s handiwork is a loaf of bread. The Roman Governor, however, maintained that if circumcision was the preferred state, we should have been born that way. To which Rabbi Akiva replied that circumcision reflects the fact that G-d gives mankind an opportunity to perfect itself.

It is certainly a principle of medicine that the skin acts as an early warning system. In my career I worked on the prevention of Oral Cancer which starts as a harmless spot on the tongue. What appears on the surface relates to what’s going on below the surface. Midrash Tanchuma proves that this is true in the spiritual realm as well. However, true to the boundless creativity of the Midrash, the definition of ‘what comes out of our skin’ takes on unexpected forms.  For example, Eve emerged from Adam’s rib. Which makes Eve a potential force for perfecting Adam.

At the crucial moment when G-d confronted Adam about eating from the Tree of Knowledge, Adam had an opportunity for growth. Midrash Tanchuma asserts that all G-d wanted from Adam was to repent. Instead he initiated the world’s first blame game:

“The Lord God called unto Adam and said, ‘Where are you?’ (What is your spiritual state) …G-d began to talk with him, as stated, ‘Who told you that you were naked?’ Then the man said ‘The woman You put at my side—she gave me of the tree, and I ate.”’ (Genesis.3:11-12)

As soon as  Adam mentioned “Eve,” he missed his chance to perform the noble act of repentance. Rather than admit his mistake, he blamed G-d for giving him Eve in the first place. He revealed a deadened sense of inner spiritual awareness.

In fact, according to Midrash Rabba, the idea of repenting did not even occur to Adam until he asked his son, Cain, what sentence he received from G-d for killing his brother Abel:

“Abel replied ‘I repented and was granted a reprieve.’ Adam then exclaimed with frustration, ‘Such is the power of repentance – and I was not aware!'” (Bereishit Rabba 22:13)

Pharaoh’s lesson from someone who emerged from his own home

Once again, the Midrash expands the horizons of what can be considered as something  which emerges from within. After all, Moses was adopted by Pharaoh as his own flesh and blood.

“When the child grew up, she brought him to Pharaoh’s daughter, who made him her son…”(Genesis 2:10)

The Book of Exodus does not deal with the emotionally-charged, family dynamic behind the confrontation between Moses and Pharaoh. We don’t know what Pharaoh was thinking when his own foster son shows up and demands that the Hebrew slaves be freed. All the Torah shares with us is Pharaoh’s complete and utter rejection of the G-d of the Hebrews:

“But Pharaoh said, ‘Who is the Lord that I should heed Him and let Israel go? I do not know the Lord, nor will I let Israel go.”’

Although we are familiar with the storyline, Midrash Tanchuma would like us to consider a path not taken. Pharaoh had an opportunity for perfection. He should have seen the significance in the fact that his antagonist, Moses, was none other than his own adopted son. Perhaps this is what the Torah means when it says that Pharaoh hardened his own heart long before G-d hardened his heart. He closed his heart to the signal that G-d was sending.

The unlikely roots of the Messiah

The final example of an opportunity emerging from within is the mysterious confrontation at the end of days with Gog and Magog. Ezekial  describes it as a world invasion of Jerusalem.

“On that day, when Gog sets foot on the soil of Israel—declares the Lord G-d—My raging anger shall flare up.” (Ezekial 38:18)

The Midrash says the Messiah, who will be victorious over Gog and Magog, will be someone who grew up among them:

“And also the Messiah, who in the future will take retribution upon Gog and Magog and all of its troops, grew up with them in the city”.

Is there something from within us that we are not examining?

At first glance, the Parsha of Tazria seems irrelevant to us since we no longer have this spiritual leprosy known as Tsoraas. However, the Midrashic notion that our opportunity for perfection comes from that which emerges from within, certainly has relevance. After all, our children, our accomplishments, even our values and goals all fit this criterion.