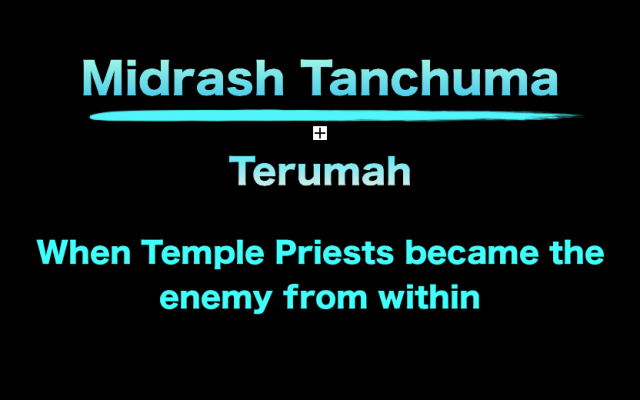 Our Parsha is about building the Mishkan in the desert, yet the Midrash starts with corruption in the Temple 800 years later.

Midrash Tanchuma makes this transition based on the word “Terumah.” In the opening verses, the word “Terumah” is used to describe the donations of gold, silver and copper that were needed for the  construction of the Mishkan:

“Tell the Israelites to bring Me (Terumah) gifts; from every person whose heart so moves him …” (Exodus-25:2)

However, that very same word,  “Terumah, ” is used in many other places in the Bible in a different context. It refers to a portion of grain, wine and oil that the Jewish People were required to give to the Kohanim. In fact, the Kohanim were provided with a total of “24 Priestly Gifts.”

Why did G-d want the  Kohanim to be relieved from the burden of working for a living?

The Terumah was like a fellowship for the Kohanim to study and teach Torah.

It’s vital to understand that the Kohanim only worked in the Temple of Jerusalem approximately 2 weeks a year. The rest of the year they were supposed to serve as teachers of the Torah to the Jewish People.

Midrash Tanchuma makes it very clear what the Priestly gifts were for and what happens if the the Kohanim did not live up to their expectations:

“The priestly offering (was given to them) in order that they become students of the Torah. Rav Yannai said: ‘Any priest who is not a student of the law, it is permitted to eat the Terumah offering on his grave.”

Rav Yannai is expressing his disdain for Kohanim who spurned their mission to study and teach Torah. According to the commentaries, the statement was meant to shame such a Kohen even after his death (akin to dancing on his grave). Rav Yannai’s mention of a Kohen’s grave is perhaps alluding to how much death and destruction certain Kohanim brought upon the Jewish People because of their illicit activities in the Temple.

Midrash Tanchuma brings a verse in Ezekiel in which the prophet accuses the Kohanim of corrupting the entire  Temple service:

How did the Kohanim, who were supposed to spiritually uplift and enlighten the Jewish People, instead violate the Torah?  Midrash Tanchuma identifies the core issue.

Ignorance of the Torah was the beginning of the end

The Kohanim became the enemy from within. Ultimately, the ignorance and corruption of the Kohanim in the Temple, along with false Prophets and sinister Kings helped promote idol worship and immorality. All of which brought much suffering and death, the destruction of the Temple and exile to Babylonia.

Rabbi Akiva stood in stark contrast to the Kohanim of the Temple. They ignored their divinely ordained role as the teachers of Torah and their corruption in the Temple shook the foundation of the nation. Of course, the final blow came when the Kings of Judea and Israel, along with false prophets, embraced idolatry.

For Rabbi Akiva, on the other hand, teaching Torah was his life.

Rabbi Akiva lived during the second Temple period.  When the Romans took control they put tremendous pressure on the Jews to abandon the Torah. In a famous story in the Talmud Rabbi Akiva was asked why he continued to teach Torah when it was punishable by death. He responded that for a Jew not to be involved in Torah is like “a fish out of water.” (Talmud Brachot 61B). Ultimately, Rabbi Akiva sacrificed his life for teaching Torah.

Interestingly enough, there are many conversations recorded in the Talmud and the Midrash between Rabbi Akiva and a Roman Governor named Turnus Rufus. It was Turnus Rufus who, according to the Talmud, ordered the sanctuary of the Temple to be plowed under.

“What is the difference between you and them (dogs)? You eat and drink, as they do, you both have children, you die and they die; yet because I called dogs by your names, you have become angry? Should not G-d who stretched out the heavens and established the Earth, who causes death and gives life, hate you when you take a tree and call it by His name.”

Turnus Rufus seemed to have accepted this explanation of Rabbi Akiva. Perhaps Midrash Tanchuma brought this story to underscore how idol worship renders the life of a human being not much different than an animal. Unfortunately the Kohanim in the Temple were part of the spiritual downfall of the Jews – many of whom embraced idol worship.

When the Temple of Jerusalem was standing, people from other nations would come to the Temple to ask G-d for their needs. As the verse states:  “For My House shall be called A house of prayer for all peoples.” (Isaiah 56:7)

King Solomon prayed that G-d should answer all their requests:

“Please grant all that the Non-Jews ask of You so that all the peoples of the earth may know Your name, to fear You, as the people Israel do.” (I Kings 8:43).

For the Jews, however, King Solomon requested of G-d a different outcome to their prayers which reflects a different relationship.

“…However, when an Israelite prays before You in this Temple, grant them what they request based on their ways (what’s best for them) as you can see into their heart”

King Solomon asked that G-d only grant the Jewish people what they need. What will truly be good for them.

This is similar to our public prayer when we announce the advent of a new month and we ask G-d to grant us:“what our hearts desire (as long as it is) what is truly good for us”

Jews have to believe that G-d is more than a supreme power that grants requests. G-d is involved in our everyday affairs and knows what’s best for us.

Parshat Terumah is about the donations (Terumah) used to construct the Mishkan – a place where G-d dwelt. However, King Solomon understood that if we lack true faith in G-d then there’s no purpose in constructing a dwelling place for G-d.