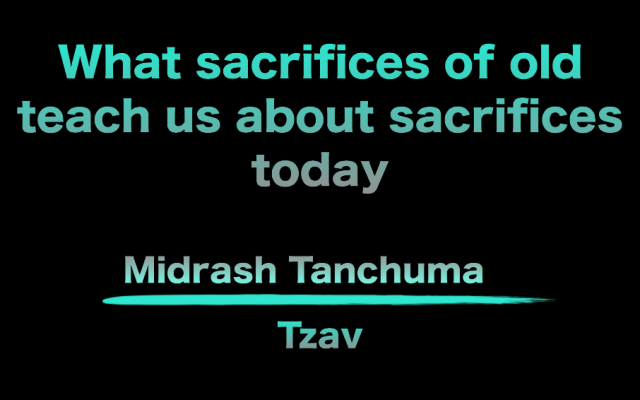 Although animal sacrifices were the fundamental manner of worship in the times of the Temple, Midrash Tanchuma describes an underlying spiritual component which can speak to us today:

The Midrash isn’t implying that a humble person is excused from bringing the appropriate sacrifice, rather, that one of the goals of all sacrifices is humility. If you can achieve that, it is counted as if you offered every sacrifice.

Going through the motions doesn’t cut it.

The Midrash speaks in a  similar fashion regarding the Todah – a sacrifice given when you are expressing gratitude to G-d. In Hebrew the word Todah is from the same root as “lehodot “(to give gratitude).  Lehodot also means to admit.

Parenthetically, both of these meanings are embedded in another word from the same root – Yehuda – the son of Jacob from whom most Jews descend. In English Yehuda is Judah from where we get the word Jew. Therefore the essence of a Jew is someone who admits their wrong doings and shows gratitude to G-d.

The Midrash says if you want to give the Todah sacrifice, the preferred animal is a bull. Next best is a calf, a lamb, or a dove. If you can’t even afford a dove, bring fine flour. If you can’t afford flour, bring words. As it says in the book of Hosea:

The word “shuvu” – “return,” is, of course,  the root of the word “teshuva” or repentance. Once again, the Midrash emphasizes that a sacrifice without sincerity and repentance is worthless. After all, as so many of the prophets have said – G-d doesn’t need sacrifices. G-d wants ethical behavior:

“Would the Lord be pleased with thousands of rams, with myriads of streams of oil? …He has told Mankind what is good, And what the Lord seeks of you: Only to do justice And to love kindness, and to walk modestly with your G-d.” (Micah 6:7-8)

The Grace After Meals – a portrait of heroism

How does this humility and gratitude manifest itself when we have no sacrifices to bring? The Midrash says that G-d shows favoritism to the Jewish People because we show favoritism to G-d. What heroic act do we do that proves our love and gratitude to G-d? The answer may surprise you:

“A poor Jew has five or six children and only one loaf of bread. They sit and share the bread but they’re still hungry. Yet they recite the ‘Grace after Meals’ (Birkat Hamazon) which is based on the verse: “And you shall eat and be satiated and then you shall bless G-d.”  (Deuteronomy 8:10)

This is the act of devotion that compels G-d to show favoritism to the Jewish People!

It seems that this family, who obviously live in poverty,  chose to, nevertheless, express their gratitude for the little they had. The Biblical injunction to recite the ‘Grace after Meal’ is derived from a verse which promises an abundance of food to the point that we are satiated. Yet this family can wholeheartedly recite: “Blessed is you G-d, King of  the universe, who feeds the entire world with grace, loving kindness and compassion…” Just as the Jewish farmer of old who can’t afford an animal, a bird, or even flour. Yet he comes to G-d with love and gratitude. He doesn’t understand why he is in this predicament, but he fully accepts it with love.

Where did the Jewish People acquire this noble trait

Midrash Tanchuma makes a startling statement about one of the most difficult episodes in the Torah –  “The binding of Isaac.”

Did G-d almost intervene too late to save Isaac?

The Midrash is saying that Abraham had such an incredible level of faith that not only was he willing to sacrifice his own son, but he didn’t spare any details. He even paused to make sure the knife was sharp enough. What would have happened otherwise? Perhaps the Midrash is implying that if Abraham didn’t achieve such a high degree of devotion by checking the blade, he would not have passed the test as well as he did. Perhaps that would have jeopardized Isaac and thereby the emergence of the Jewish People.  However, by checking the knife Abraham embedded in the DNA of the Jewish People the ability to carry out G-d’s will without questioning. Like the poor family who shared a loaf of bread. They could have felt that there is no need to recite the ‘Grace after Meals.’ After all G-d did not deliver on the abundance of food that He promised. But instead they were grateful for the measly sustenance they had.

Prayer in lieu of sacrifices

Many Rabbinic sources declare that animal sacrifices have been replaced with prayer as it says:

“Rabbi Joshua the son of Levi said: The prayers were instituted in place of the temidim – the daily sacrifices.” (Talmud  Berakhot 26b)

Obviously all the criteria we mentioned for heartfelt sacrifices have been transferred to heartfelt prayer.

The Parshiot in the Book of Vayikra are hard to relate to since we are too many generations away from having a true understanding of animal sacrifice. However we are currently being called upon to make sacrifices. We are asked to drastically curtail our freedom of movement, not to mention enduring emotional and  financial stress.

Perhaps our test is whether we can accept these sacrifices with humility and gratitude.

About the Author
(Almost 100 Midrash Video summaries can be found on my youtube playlist: https://www.youtube.com/playlist?list=PLynSVeS5_iNhHleKroA6r3br-bmaHQigk) After college and Semicha at Yeshiva University my first pulpit was Ogilvy where I wrote TV commercials for brands like American Express, Huggies and Duracell. My passion is Midrash Tanchuma. I am an Architect of Elegant Marketing Solutions at www.mindprintmarketing.com. We are living in (where else) the Nachlaot neighborhood of Jerusalem.
Related Topics
Related Posts
Yoni Mozeson
Comments