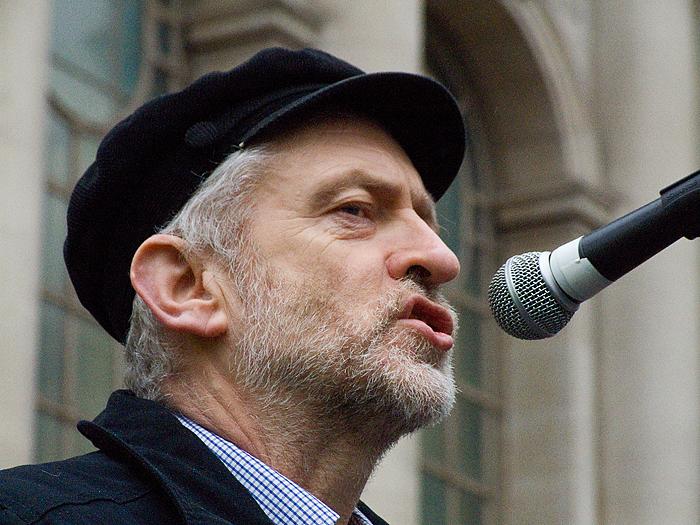 Marxoid ‘socialist’ Jeremy Corbyn leads the race for leadership of what’s left (excuse the pun) of the British Labour Party. A patron of Palestine Solidarity Campaign (an organisation whose very logo denies Israel’s right to exist), Corbyn has always exhibited a soft spot for terrorists (from IRA to Hizb’ullah and Hamas) and a hard grudge towards the Jewish State.

Palestine Solidarity Campaign’s logo displays a map of ‘Palestine’ not alongside, but instead of Israel. (https://en.wikipedia.org/wiki/File:Palestine_Solidarity_Campaign_(logo).jpg)

Recently, in an interview with ‘Electronic Intifada’ — yet another Israelicidal groupuscule — Comrade Corbyn has once again expressed support for anti-Israel boycotts. Nothing new there. But where ol’ Jeremy steps beyond the levels of ridicule ‘normally’ associated with berserk anti-Israel militancy is where he tries to justify his call to pogrom by citing, among other capital sins, the

Had Jeremy lifted his nose from the Little Red Book for just a few short moments, he might have noticed that, while he was oh-so-righteously riling against the Jewish state, his own country was desperately struggling to keep out a few thousand very similar asylum seekers, ‘sheltered’ in squalid camps around the French port of Calais. As for those who do manage to get in illegally, the University of Oxford’s Migration Observatory tells us that, in 2014 alone,

there were 38,767 people who were removed from the UK or departed voluntarily after the initiation of removal. This figure excludes individuals refused entry at port and subsequently removed, in order to focus more closely on what most people normally think of as ‘deportation’.” 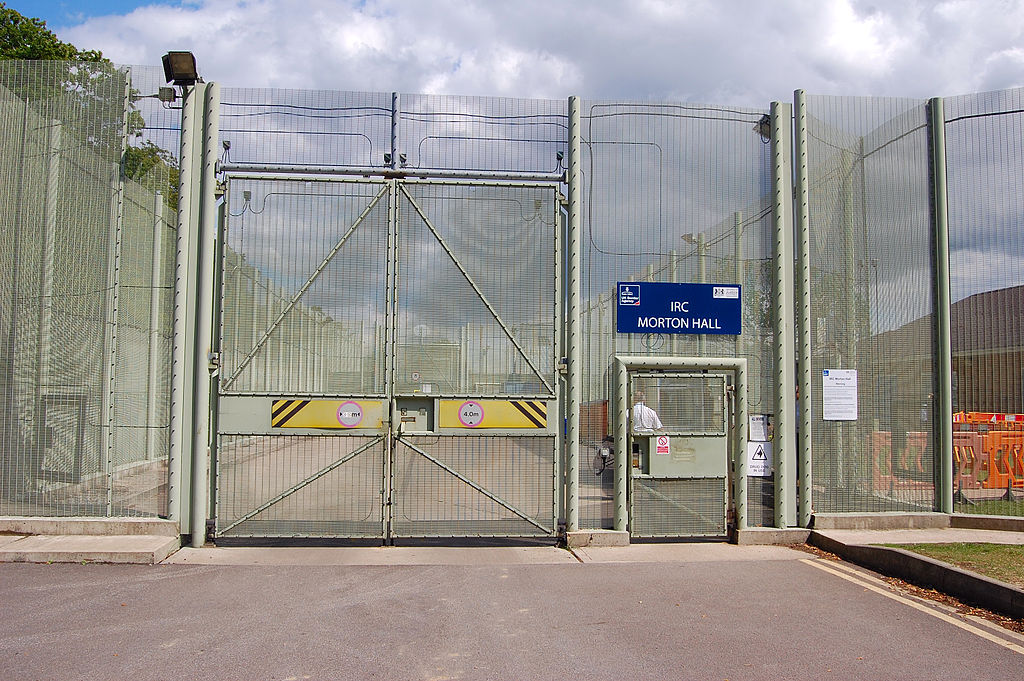 One of the British ‘Immigration Removal Centres’. It’s a PRISON, mate!
(https://en.wikipedia.org/wiki/Morton_Hall_Immigration_Removal_Centre#/media/File:IRC_Morton_Hall_secure_area.jpg)

In other words, not just Israel, but also the United Kingdom assiduously practices what Corbyn calls “expulsion”. Which, of course, is in no way different from “what most people normally think of as ‘deportation’” and from what the British authorities euphemistically call ‘removal’. There are 11 designated Immigration Removal Centres (IRCs) in the UK, in addition to 4 designated Residential and Short Term Holding Facilities and one Non Residential Short Term Holding Facility. A ‘Holding Facility’ is, by the way, what most normal people would call ‘prison’ and what — if referring to Israeli ‘Holding Facilities’ — Comrade Corbyn would probably dub a ‘concentration camp’.

Some British politicians have called for the Army to be deployed to tackle the ‘danger’ of asylum seekers desperate to reach their country. Prime Minister David Cameron described those migrants as ‘a swarm’ — a term usually employed for insects.

Of course, it’s not just the UK, either. According to The Economist, the ‘progressive’ Obama administration has ‘removed’ from the United States of America circa 2 million ‘illegal aliens’, more than all the ‘regressive’ administrations that preceded it. Nevertheless, it is estimated that there are still some 12 million very earthly ‘aliens’, who are ‘illegal’ despite having lived in USA for many years.

Germany is in the process of ‘removing’ 94,000 asylum seekers. One of them, a 30-years-old Pakistani, opined that

In Germany there are three categories of refugees: the first are Syrians and other Middle East refugees who are awarded permits and education. Second come the Afghans and Pakistanis, who have to struggle a bit but are allowed language school and work permits. But then there are the Africans who are widely perceived as economic migrants leeching on the system and petty criminals dealing in drugs who are not particularly welcome anywhere.”

Like Israel, Denmark is paying migrants to leave. In Sweden, anti-immigrant sentiment is on the rise.

Bulgaria tries to keep them out with a high steel security fence along its frontier with Turkey. Malta keeps them away from tourists in squalid camps in the south of the island. Hungary locks them up in prison cells or overcrowded army barracks, many sedated with drugs.

In bankrupt Greece, conditions are so bad that most prefer to head for Italy, which tries to move them on as soon as possible. In Spain’s African enclaves, so many were shot or ill-treated that they all but stopped coming. In France, where they are given just £9 a week to live on, many head for Calais, sleeping under plastic sheets, ready to risk death in a bid to reach a friendlier Britain. Last year, more than 3,000 failed to reach Europe at all, as their pitifully inadequate boats turned the Mediterranean, as the Pope put it, into ‘a cemetery’.”

Admittedly, some European consciences suffered minor pangs when hundreds of asylum seekers — men, women and children — have drowned in the Mediterranean Sea; but, rather than ‘how do we bring them here more safely’, the response has typically been ‘how do we keep them out more thoroughly’.

It’s not just Europe and not just the West. Throughout the Arab world (with the partial exception of Jordan), Arab men, women and children are denied political and economic rights, as well as a path to citizenship in the country of birth, simply because their grandparents (or great-grandparents, or great-great-grandparents) were refugees from ‘Palestine’.

Thousands of Rohingya (Burmese Muslim) asylum seekers have been left to rot at sea — or have been killed when they landed on various Asian shores.

Intent on not allowing them on any of its shores, Australia intercepts would-be asylum seekers at sea and ‘interns’ (read: imprisons) them in a poorer neighbouring country — Papua New Guinea. The latter is paid to serve as Australia’s ‘Holding Facility’.

Even in (somewhat more affluent by African standards) South Africa, migrants from poorer South-Saharan countries have been met with violence.

None of this is pretty; and some of it may be inexcusable. But it is not an Israeli problem — it is a global one, painful and extremely difficult to solve.

The likes of Jeremy Corbyn and his ‘Solidarity’ ilk, however, don’t care about all this. They hardly move a finger to solve the tragedy unfolding right under their own sanctimonious noses; they don’t care about the UK, Germany, France, USA, Australia, or South Africa; they don’t really give a rat’s ass about the asylum seekers themselves. Their beef — their single-minded, obsessive, demented beef — is with the Jewish state. And only with the Jewish state. Which, it has to be said, makes them true Socialists; as in ‘National Socialists’!