In academic Talmud, there is to some degree a phenomenon of what I like to call an “ABC” approach, which stands for “anyone but Chazal.” (Chazal is a Hebrew acronym for “Ḥakhameinu Zikhronam Liv’rakha” – “Our Sages, may their memory be blessed”. It is a general term that refers to all Jewish sages of the Mishna and Talmud eras. This period lasts roughly from the times of the final 100 years of the Second Temple of Jerusalem until the 6th century CE). ABC is an attempt to portray/depict/view much of Judaism as simply a regurgitation of other religions.

From the title Migrating Tales: The Talmud’s Narratives and Their Historical Context, it would appear at first glance that the book would be simply another ABC attempt to separate the Talmud’s teachings from the Talmud’s own claimed sources, and attempt to find the true sources. 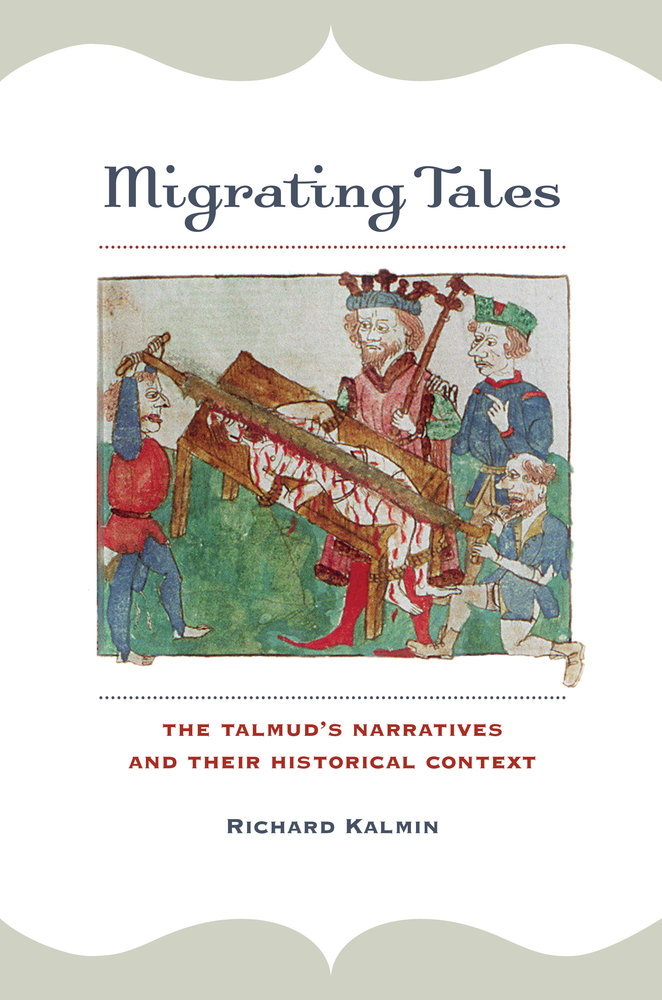 But that is not the case. Author Dr. Richard Kalmin takes an analytical, yet conservative approach. He reads the external sources not as a way to disagree with the Talmud, but rather to gain a much more insightful knowledge of the beauty and the depth of the text and underlying storyline.

The reader looking for a revisionist approach will be disappointed in Kalmin’s method and the overall structure of the book. Professors Daniel Boyarin and Peter Schäfer have used such methods when performing textual analysis, to which Kalmin objects to, stating that their claims are not yet justified by the available evidence.

His main argument is that a significant cultural change is evident starting in the 4th-century of Babylonia, due to the incorporation into the Babylonian Talmud (Bavli) of non-rabbinic and non-Jewish traditions deriving from other cultures.

This is a fascinating book that takes a number of stories from the Bavli and attempts to read them in their cultural context against the background of Greek, Syriac, Arabic, Persian, and Mesopotamian literature of late antiquity and the early middle ages. The eight stories and subjects from the Bavli the book analyzes are (according to the chapter titles):

While Dr. Shai Secunda’s approach is that the Bavli must be read in its Sasanian context, Kalmin’s approach is that an understanding of the non-Jewish literature derived from the eastern Roman provinces is needed to fully interpret parts of the Bavli.

The book is concerned with how narratives traveled from one culture to another, and how the meaning of these narratives changed from one literary and cultural context to another.

Kalmin writes that the Bavli, unlike the Jerusalem Talmud was particularly open to traditions and motifs deriving from the literature and cultures of contemporary religious groups.

As to the connections between the rabbis of the Bavli and their surrounding cultures, Kalmin takes a conservative approach and avoids overly sweeping conclusions that would suggest close cultural connections between the Mesopotamian Jews and Christians. With that approach in chapter 7 on astrology; he notes that while astrology was an international phenomenon, it requires one to exercise caution in distinguishing between the contributions of Christianity, Judaism, Zoroastrianism, and Greek and Roman paganism to the Babylonian rabbinic attitudes toward astrology.

An important point he makes is that commonality within the stories does not necessarily indicate that the rabbis borrowed these motifs from the Mesopotamian Christians.

A fascinating area which Kalmin discusses, which would make an absorbing book in its own right, is the notion of language-switching in the Bavli. Language switching, something Dr. Shamma Friedman stresses in his research, is obvious to any reader of the Talmudic sugya; who will quickly observe the switching between Hebrew and Aramaic. Kalmin writes that when a single statement in a sugya comprises both Hebrew and Aramaic, the statement is often divisible into an early core and a later explanatory addition.

For those looking to enhance their understanding of the Bavli, Migrating Tales: The Talmud’s Narratives and Their Historical Context is a most welcome addition.