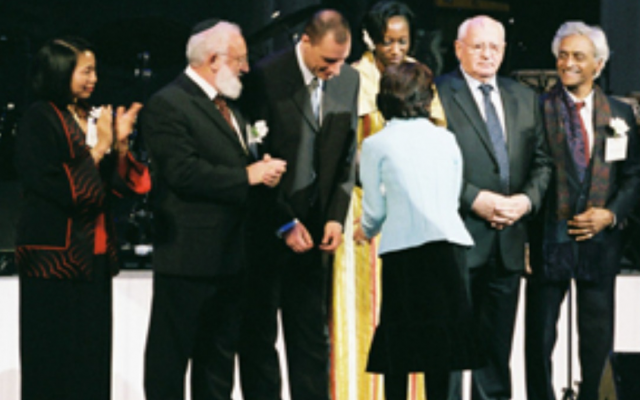 The passing of Mikhail Gorbachev reminded me of a brief conversation I had had with him. Even before I met him, I had the impression that he was truly a different kind of politician. He was not inherently bad; he understood people and felt close to the regular folk. In the impossible framework where he operated, I think he did his best, and in everyone’s favor. Had he not been taken down from his post as the leader of the Soviet Union, he would have done more good for his country and for the world.

By the time I met him, in November 2005, he had been out of office for nearly fourteen years. Nevertheless, he was still trying to help make the world a better place. We met at a conference in Tokyo, Japan. At the time, I was a member of the World Wisdom Council (WWC), and he was an honorary chairperson of the organization, which was headed by Prof. Ervin Laszlo.

In that event, the Goi Peace Foundation, located in Japan, had invited the WWC for a conference in Tokyo, to participate in its initiative titled, Creating a New Civilization. The highlight of the event was a series of speeches in a hall in downtown Tokyo before an audience of 5,000 people including ambassadors and other officials from 46 countries.

The night before the event, the members of the WWC met for a social gathering with a more casual tone than the formal discussions. That evening I exchanged a few words with Gorbachev. He was very friendly and informal, the last thing you would expect from a former president of the USSR.

In our conversation, I told him that I appreciated his efforts to make the world a better place. He replied that he appreciated my understanding of his intent, and said that he was still active and trying to help wherever and however he could.

I think that considering the circumstances under which he operated, coming from a Soviet, communist background, the reforms he had carried out were astounding, inconceivable until he actually began to make them. In that sense, he was truly a pioneer and deserves the world’s respect for his contribution to humanity.