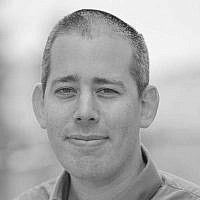 The Blogs
Tani Frank
Apply for a Blog
Advertisement
Please note that the posts on The Blogs are contributed by third parties. The opinions, facts and any media content in them are presented solely by the authors, and neither The Times of Israel nor its partners assume any responsibility for them. Please contact us in case of abuse. In case of abuse,
Report this post.

Since the recent elections, one question has arisen repeatedly: Are we really at the threshold of a ‘Halakhic State’ or in other words a theocracy? It is obvious that this cannot be a quick process, but the outgoing government provided hope for those who seek religious freedom in Israel and now there is concern, that stems from the shattering of that hope, that it is possible to move the needle toward policies that promote an inclusive, pluralistic Judaism. Now that a new government, governed by Haredi and extreme right-wing parties, is poised to take power, the concerns have started to become more realistic.

Some have tried to belittle this concern and underplay the advancement of additional religious law policies. However, the reality has been exposed very quickly. It has been reported that the religious parties have made several demands during the ongoing coalition negotiations, including, among others, the cancelation of the ‘grandchild clause’ of the Law of Return.

The Law of Return, which was passed in 1950 and most recently amended in 1970, grants eligibility to Jews, children of Jews, and grandchildren of Jews, as well as members of their immediate family, to immigrate to Israel and obtain full citizenship. It is worth noting that most immigrants to the State of Israel today are eligible to do so by virtue of the Law of Return and specifically this clause. Therefore, most immigrants to Israel are not Jewish, neither according to the Jewish law (Halakha) nor as defined by the law.

In recent years, murmurings have begun, mainly in the extreme wing of religious Zionism, in support of the cancellation of the grandchild clause of the Law of Return. That is, they wish to prevent the immigration of tens of thousands of new immigrants per year, claiming that the Law of Return is being exploited to confer citizenship on those who have no connection to the Jewish people. In fact, most immigrants join the Jewish collective and assimilate into the Jewish majority in Israel. A small minority indeed exploits the law and uses Israeli citizenship to move on to other countries.

However, if we deepen our perspective and examine the motivations of those elements that wish to cancel the grandchild clause, we cannot help but ask: Why would it end there? After all, from the perspective of Haredi politicians, they are the true authentic Jews. Judaism must be Orthodox, in its strictest interpretation, and by that logic the Law of Return should apply only to someone who is halakhically Jewish or who has converted in a rabbinical court that is accepted by Haredi society. Therefore, it is clear, canceling the grandchild clause is merely the first step of a longer path.

It is worth noting that the chances of this amendment to the Law of Return coming to fruition remains low. Within the Likud Party, there is little support for amending the law, and there are those who have already taken the trouble of explaining the magnitude of the damage that such legislation could cause to the relationship, fragile as it is, between the Israeli government and Diaspora Jewry. Whether or not this demand is included in the coalition agreement, the very fact that it is being raised in negotiations by the religious parties, which now hold 32 Knesset seats – half of the coalition and more than a quarter of the Knesset – should concern us all. That is not to say that the present iteration of the Law of Return cannot use some improvements. It certainly could – and the Center for Judaism and State Policy at the Shalom Hartman Institute has published a policy paper that proposes a rethinking of the law. However, it must not harm the delicate web of relations, nor the right of every child of the Jewish people – and even grandchild – to realize the right to immigrate to the State of Israel.

We must remember that the demand to cancel the grandchild clause goes against the values of the Israeli Declaration of Independence and of the very existence of the State of Israel as the national home of the Jewish People – even the distant sons and daughters of the People. We must remind those elected by the Israeli public of this – and of their responsibility for the integrity and wholeness of the Jewish People.

About the Author
Tani Frank is the Director of the Judaism and State Policy Center (JSPC) at the Shalom Hartman Institute.
Related Topics
Related Posts