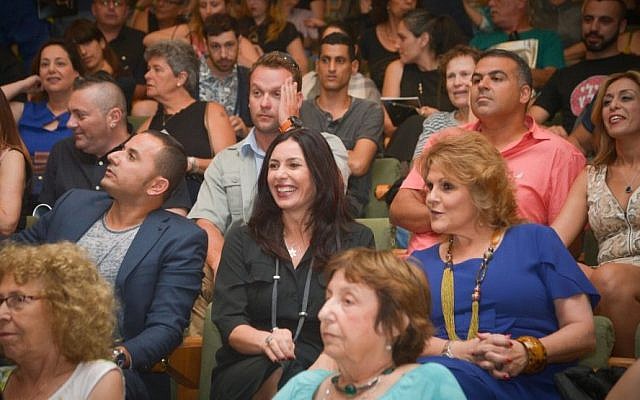 Minister of Culture Miri Regev (center) at an award ceremony for Israeli theater, in Tel Aviv, on June 19, 2015. (Photo by FLASH90)

Free speech issues are back on the agenda in Israel.

With the arrival of a new Minister of Culture, Miri Regev, a series of free speech issues have gained the attention of the Israeli media and public. First there was a statement by an Israeli actor, Norman Issa, saying he would refuse to participate in a performance of his acting company in the Jordan valley. Next came a movie about an individual who murdered an Israeli soldier which seemed like a defense of his actions. And then surfaced a film about Yigal Amir, the assassin of Prime Minister Yitzak Rabin, which appeared to express sympathy with the killer.

All these cases involved highly charged political issues that inevitably stir passions in Israel. As in the United States, fierce arguments ensued about when free speech crosses the line into something more dangerous, about the difference between speech that comes from independent institutions or individuals and speech that is funded by government, and about what constitutes the public interest in discussing the curtailment of speech.

The minister of culture focused on the expenditures of her budget. She distinguished between the right of individuals or institutions to say or put on productions of the most obnoxious things, and the question as to whether government should fund such things. On the face of it that appeared to be a legitimate distinction — except for the fact that leaving that discretion to the minister of culture could lead to disturbingly high levels of politics in the decision as to what to fund, and what not.

However valid Regev may or may not be on the funding issue, the most disturbing of her comments came following criticism of her decisions by the Zionist Union. She lashed out by saying, too bad, you are the losers, we are the winner, we won 30 seats, you won only 20, therefore the decisions are only mine to make. While it is true that she became minister of culture because her Likud Party formed the government, this line of approach is a grave misunderstanding of democratic society and values, and potentially holds within it future threats to democracy.

In America we understand this viscerally because we have a Bill of Rights and a Supreme Court that interprets the application of those amendments to the Constitution. Basic rights, such as freedom of expression and freedom of religion, stand on their own and are not subject to the whims of parties that may control Congress or a public that may be outraged about some particular expression. Without those basic freedoms, protected by the courts, America would be a very different place. Indeed, one could argue that it might not be recognizable as the democracy that it is without them.

Israel famously does not have a constitution. But it does have a Declaration of Independence which bespeaks the values of a Jewish Democratic State. And it does have basic laws, enacted over many years, which form a constitution-in-the-making. While it is perilous simply to analogize civil rights in the U.S. to a country like Israel, whose history is very different, whose ongoing daily experience is much more uncertain, the fact is the basic value of free expression is embedded in Israeli society as it is in American.

There may be strictures on free expression which arise because Israel remains a nation under siege and, in a way, at war. Still, these must not be seen as political limitations of free speech, which is a toxic inhibition, but ones related to security. Even those must be monitored carefully, but necessity sometimes demands them; most notable in this respect was the suspension of habeas corpus by America’s greatest president, Abraham Lincoln, during the Civil War.

If any good can come out of these recent controversies, it must reside in a recommitment by all in Israel, whether on the left or the right, to the fundamental protection of freedom of expression and to recognize that the Supreme Court of Israel, not the political system, must be the arbiter of when those rights are being violated and how they need to be protected.

About the Author
Abraham Foxman was national director of the Anti-Defamation League for 28 years. He is a Holocaust survivor.
Comments