So Minister of Culture Miri Regev wants to promote a loyalty bill, whose goal she says is “to make support for a cultural institution dependent on its loyalty to the State of Israel.”  She wants a loyalty oath for artists. Where have we heard that before?  Oh yes, the loyalty oath in America of the 50s during the height of the McCarthy era.  When artists, teachers, etc were required to sign something which stated along the lines of

The variation on the above theme popularized by House Un-American Activities Committee was:

Are you now, or have you ever been, a member of the Communist Party?

Culture Minister Miri Regev: The Daily Beast calls her “the Sarah Palin of Israel”. (Photo: The Times of Israel)

And Regev is not alone.  There’s Minister of Education Naftali Bennet supporting the removal of the novel “Borderlife” by Dorit Rabinyan, about a Jewish-Muslim interfaith relationship, from the recommended books list.  And reports that they are preparing a black list of forbidden books for high school curriculum.

And Minister of Justice Ayelet Shaked is promoting an NGO Bill aimed at deligitimizing peace and human rights organizations which receive foreign government funding, while ignoring all the tens (hundreds?) of millions of dollars pouring into the country from private sources that support the settlements and Prime Minister Netanyahu’s agenda – see the mass circulation Israeli freebee Yisrael Hayom (Israel Today), financed by Sheldon Adelson, as a prime example.

This government inspired McCarthy-like stigmatization of Israeli liberal and progressive groups is being aided by right-wing extra-parliamentary NGOs like Ir Tirzu (If you will it)  and Ad Kan (Till Here), working hand-in-hand with their government colleagues to stifle dissent, critical thinking and freedom of expression.

The latest attempt, the Im Tirzu campaign to label many of Israel’s leading writers and artists, such as authors Amos Oz, A.B. Yehoshua, David Grossman, actress Gila Almagor, playwright Yehoshua Sobel, singers Hava Alberstein, Rona Kenan and Sha’anan Street (soloist of Hadag Nachash) and others traitors, foreign agents, because they sit on the boards of organizations devoted to civil liberties, human rights and peace, may have gone too far.

I highly recommend that Miri Regev and her friends go to see “Trumbo”, a  film about the McCarthy period in the U.S., which will soon be showing in Israel.  The movie tells the story of Dalton Trumbo, one of The Hollywood Ten, senior members of the Hollywood entertainment industry, writers, actors and directors, who were blacklisted from working in Hollywood because of supposed Communist sympathies, membership in the party or an unwillingness to testify against their friends. Their story, told before in “The Front” with Woody Allen and the unforgettable Zero Mostel, himself a blacklisted actor, focuses in this movie on Trumbo, considered perhaps the greatest screen writer of his time.

In the movie, we see that Trumbo and his colleagues were forced to write for Hollywood under assumed names, with Trumbo even winning two Oscars in the mid-50s, one uncredited, and the other under the pseudonym Robert Rich (who obviously couldn’t come up to the stage to receive his award). 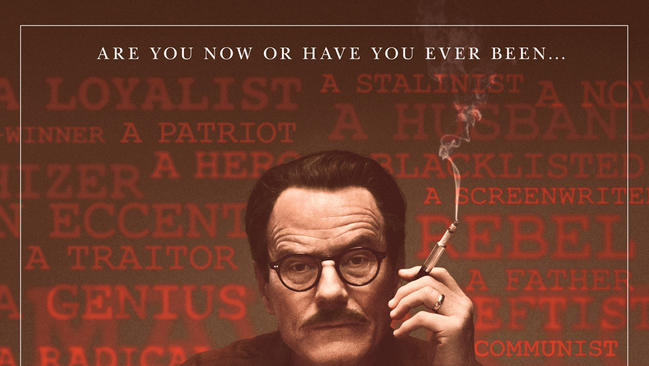 The blacklist was finally broken when two Hollywood heavy-weights had the courage to confront it.

The first was Kirk Douglas, who came to Trumbo in 1960 and told him that he had a good story for him to write a script for.  “It’s the story of how one man fought against the establishment”.  The name, “Spartacus”.  And Douglas promised that Trumbo’s name would be listed in the credits.

The second was director Otto Preminger, who told Trumbo he had the rights to a book which he felt wasn’t very well written, but had potential for a good movie.   The book was called “Exodus”. And if “Spartacus” had Kirk Douglas, well Preminger had Paul Newman for his project.  Trumbo was convinced to do it, but Preminger didn’t promise he would get credit.  However when he heard that Kirk Douglas was giving him credit for “Spartacus”, he convinced his producers and director Stanley Kubrick to give Trumbo credit as well. Then John F. Kennedy was elected president and went to see “Spartacus”, despite right-wing protests against the film.

As is well known, “Exodus” told the story of the establishment of the State of Israel.  “Spartacus” was based on a novel about a slave revolt against the Romans by Howard Fast, once the second most popular author in the world after the authors of the Bible.   Fast was himself a Communist though he later became disillusioned, while remaining a socialist.  He was even a dues-paying member of Americans for Progressive Israel, forerunner of today’s Partners for Progressive Israel (formerly Meretz USA).

So to return to Israel of today, by running a campaign to target many of Israel’s leading writers and artists as being unpatriotic, and even traitors, Im Tirtzu and its government supporters clearly went too far.  Not only did almost the entire Israeli artistic community condemn the campaign, Likud Member of Knesset Benny Begin called it “fascistic”, and Bennett to his credit declared that “the campaign against artists is embarrassing, unnecessary and demeaning”. Even Prime Minister Netanyahu and Culture Minister Regev criticized the campaign.

In America, targeting the army led to McCarthy’s downfall

In America, Senator McCarthy’s campaign to hound all critics out of public life and destroy their careers came to an end when he began to target the American army as being infiltrated by Communists and other “un-American” types. Targeting the army was clearly going too far.

Here in Israel, the army has not yet been targeted, though the right was not happy with IDF Chief of Staff Gadi Eizenkot’s recent statement that the Iran nuclear deal contained “opportunities” for Israel, not only dangers. And they are also not happy with the fact that the security establishment doesn’t blame the “Knifing Intifada” on Palestinian incitement, but rather on the lack of hope for the future of the Palestinian younger generation. A turning point in the struggle over Israel’s future?

And as a post-script to all of this, I recommend that Dalton Trumbo’s brilliant 1939 anti-war novel, “Johnny Got His Gun”, be required reading for all high school students.  We need an army to defend ourselves against genuine dangers, but we also need powerful antidotes like “Johnny Got His Gun”, to guard against exaggerated militarization and glorification of war. “Johnny Got His Gun” by Dalton Trumbo won the Most Original Book of 1939 National Book Award. (book cover)
About the Author
Hillel Schenker is Co-Editor of the Palestine-Israel Journal, and lives in Tel Aviv
Comments
Advertisement