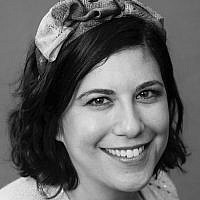 The Blogs
Miriam Gross
Apply for a Blog
Please note that the posts on The Blogs are contributed by third parties. The opinions, facts and any media content in them are presented solely by the authors, and neither The Times of Israel nor its partners assume any responsibility for them. Please contact us in case of abuse. In case of abuse,
Report this post.

A fascinating and common understanding of the water Laver (the Kiyor) in the Mishkan, was that it was formed from the copper mirrors that the women had brought out of Egypt.  This was the vessel used to provide water for ritual purposes, rinsing, libation and most notably while least occurring, for the Sotah ritual.  In grade school this is taught through a Midrash found in the Rashi commentary on Exodus 38:8, and translated with heavy commentary.

The women would beautify themselves so that their husbands would want to procreate, in spite of the humiliating and backbreaking labor that the Egyptians imposed upon them. This virtuous beautification merited to become an integral part of the making of the Mishkan.  The copper mirrors, ‘mirrors of legions’ become a metaphor for the hope of a nation emerging from Egypt 600,000 strong.  The rest of the Midrash  according to Rashi,  usually left out by the grade school teachers, goes as follows:

Moshe rejects the contribution of these copper mirrors, claiming that they are objects of lust, and have no place in the outer courtyard of the Mishkan. His sensitivity is immediately shut down by the Almighty.  “Accept these gifts immediately, for they are the most dear to me of all things” with these mirrors, “the women established (he’emidu) legions in Egypt.”

What exactly transpires between the men and women in this copper mirror seduction story?  The story unravels as a study of the complex nature of competition, gender roles and seduction in the  male/ female dynamic.  Women bring their husbands food and drink to the fields where they are working.  They descend to the fields without ever glancing in the mirrors.  After feeding their husbands with the food  that they provide, they hold up the copper mirrors to reflect themselves and their husbands side by side. The  men have no choice but to consider themselves and the women with them- to visually experience the differences between them.  They tease the men saying  “I am more beautiful than you”. The men, apparently humiliated, but also ignited,  are shocked out of their slave mentality and leap into competitive mode, culminating in passionate cohabitation.  The male competitive spirit is aroused through these copper mirrors by the female competitive spirit, not as we may have thought by the passive seduction of women primped and primed as objects of  lust.  Additionally, according to the literal translation of the Rashi, the children born of this strange encounter are in fact secondary to the inspiring display of competition between the genders.  He’emidu (established) Tzvaot (legions) rather any word used to hint at pregnancy or birth.

Gender roles  in this story do not conform to traditional models, even within the short paragraph, the roles fluctuate erratically, making it impossible to point to a feminine behavior and distinguish that behaviour from a masculine behavior.   The dynamic however, between the male community and the female community is pronounced and complicated.   In our society, we are constantly negotiating between the supposed weaknesses of being a woman and the assumed and historic benefits of being a man. We struggle imperfectly, to level the playing field to give equal access to women, while still addressing the needs of men.   We are stuck in a dynamic of out-manning or out-womaning each other in the name of either tradition, effectiveness or progress.  With each equalizing solution put forth- in the workplace, public life, and even in the home,  fierce opposition emerges from all ends of the spectrum. Either the feminist solution is subtlety paternalistic,  does not protect women enough, or puts men at too great a disadvantage to be an equalizing accommodation.  Many feminist solutions do not address the needs of minorities, and others do not address the needs of women in more upper level professional  roles.

Embedded within the Torah approach to gender roles, lies one of the most radical solutions to gender inequality confounding the modern world.  This is the revolutionary concept that  men and women are actually competitive partners, each vying for a worldview that reflects their own values, yet neither desiring the actual submission of the other. Gender roles can be used to free men and woman, and they can be used to oppress both men and women.  The Almighty’s final argument for these copper mirrors, culminates in this last line: these were mirrors used to make peace between husband and wife, (in other words between men and women in general) a value occupying a high level of priority in our tradition.  Once the mirrors were melted into the Laver, among its other uses, they became an essential tool in resolving the suspicions of the jealous husband in the Sotah ritual.  This peace born of healthy competition, and an interest in the success of one’s opponent, offers itself as a model for a revolutionary understanding of many of the core tensions between male and and female cultures in our own community, are we up for it?

About the Author
Rebbetzin Miriam Gross has been a Jewish educator for over 15 years and holds a Masters degree in Jewish Education. She was ordained by Hebrew college as a Jewish Educator in 2008, ordained as a Rebbetzin in 2009 by marrying a pulpit Rabbi. And today, she is the most politically conservative student at Yeshivat Maharat where she studies Halacha and Gemarah with love and will be ordained as a Rebbetzin in her own right in 2019 with Gds help.
Related Topics
Related Posts
Comments