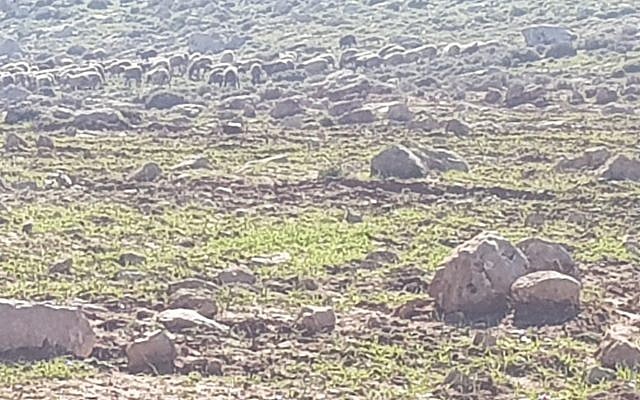 Just yesterday, I filmed settlers from the Malakhei HaShalom outpost driving their flocks through a planted Palestinian field. The problem is even more pronounced near the Rimonim settlement. The Bedouin in the area say they rarely have problems with settlers from Rimonim itself, although angry settlers leaving or entering Rimonim have often stopped to curse me for helping the Bedouin. The greater problem is an outpost just north of Rimonim. For the last year we have been documenting the flock going through planted fields and grazing. They quickly move to unplanted areas when we or security forces drive up. The police refuse to do anything if the landowners themselves don’t complain, and that will be our next step.

Last spring shepherds lost between 50%-100% of what they planted. They had intended to graze their own flocks in these fields in the lean summer months when here is very little green, and also sell to other shepherds. Losses were as high as NIS 30,000. If a shepherd can’t feed his flock, no soldier needs to expel him. He will need to leave “of his own accord” because he can’t feed his family. In other words, eating everything that shepherds sow is another strategy for dispossession.

Most of the settlers we deal with consider themselves religious. However, for all too many the social laws and norms outlined in this week’s Torah portion, Mishpatim, are only applicable to how they treat Jews. Maybe not even all Jews. An important lesson we learn in the transition from last week’s Ten Commandments to the seemingly minute details in this week’s portions is that evil or holiness is found in the details of our everyday actions. To fulfill the Ten Commandments, one must observe the myriad commands in Mishpatim.

Given that Hebrew is not my mother tongue, that the root of the word used is bet ayin resh means to burn, and given the fact that the next line in our portion deals with fire damage, my first assumption would have been that this line is referring to burning somebody’s field. However, Rashi explains that this is allowing one’s animals to eat what is growing in the fields of others.

Of course, there is a connection. When we wantonly disrespect the fields of others and take food from their families, we fan the fires of anger and hatred.

By respecting the Image of God in every human being, Jewish or non-Jewish, we create understanding and holiness.