It isn’t true that convicts live like animals: animals have more room to move around – Mario Vargas Llosa.

I had occasion to visit a Uruguayan jail and the cells of the least privileged inmates. To say that caged animals live better is a serious understatement of the physical, social, emotional and psychological hell the inmates go through. While being admitted to this prison is in fact a death sentence for many, those who do survive and get out, return to society as broken human beings, often even more dangerous to themselves, their families, their communities and society at large.

The Torah portion of Mishpatim dives into a plethora of civil laws, many of them dealing with violent crime. What is interesting and perhaps counterintuitive to our society is that amongst the variety of punishments – execution, lashes, making reparations, and a prominent case which includes a period of indentured slavery – a prison sentence is never mentioned.

“Prison sentences, with all the attendant despair and moral debasement behind prison bars, with all the woe and misery that imprisonment inflicts upon the prisoner’s wife and children, are unknown in God’s Law. Where God’s Law holds sway, prisons as an abode for criminals do not exist. Jewish Law provides only for detention pending trial, and even this can happen only in accordance with a judicial procedure set down in detail. Such a detention can be of short duration only, and circumstantial evidence is inadmissible.”

“But even this solitary case (of indentured slavery), in which the Law decrees loss of freedom as the consequence of a crime, cannot be construed as a “punishment.” The purpose of this law cannot be punishment because it sentences the thief to six years’ servitude only with the purpose of making restitution for the actual value of the theft.”

Rabbi Hirsch elaborates further that the slavery comes into play only if the value of what the thief stole is in excess of his working capacity. Additionally:

“The victim of the theft has the right to waive restitution derived from the sale of the thief and to content himself with a signed promise from the thief to pay restitution as soon as his material circumstances improve.”

Prison is not the solution. It even likely exacerbates the problem.

Dedication: to Martín Correa González and all the other dedicated workers in the Uruguayan prison system. 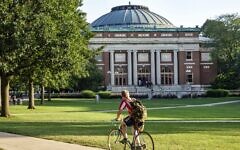