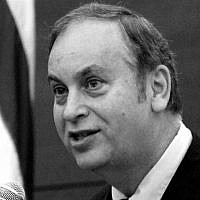 The Blogs
Charley J. Levine
Apply for a Blog
Advertisement
Please note that the posts on The Blogs are contributed by third parties. The opinions, facts and any media content in them are presented solely by the authors, and neither The Times of Israel nor its partners assume any responsibility for them. Please contact us in case of abuse. In case of abuse,
Report this post.

What if they gave a conference on anti-Semitism and a pack of anti-Semites turned up to speak? I’d be as outraged as a small band of critics with too much time on their hands who disingenuously sought to position this week’s Global Forum for Combating Anti-Semitism in precisely that false way.

Here’s the facts, Ma’am. I know because I was nominally involved on the inside, helping communicate the event’s messages to the wider public through the media. Israel’s Ministry of Foreign Affairs is hosting over 500 government and civic leaders to forge innovative and effective ways of countering the scourge of anti-Semitism. The Global Forum includes participants from more than 50 nations and six major religions all united under the banner of fighting the vile growth of anti-Jewish acts and messages which have mushroomed recently throughout the international community. Some critics, including a few who have voiced their opinions on the pages of this newspaper, have called into question the validity of this Forum based on its invitation to senior representatives from nations facing particularly troubling levels of Jew hatred within their countries. Their specious contention is that Israel should not “honor” any country where anti-Semitism is prevalent within society by providing its spokespeople a forum.

These accusations are misplaced both factually and in terms of a basic understanding behind the Forum. We must first of all remember that anti-Semitism is not a problem restricted to one nation or one part of the world. The forces that influence people to discriminate against Jews or to attack them, verbally or physically, are not limited by any national or geographical borders. Some countries have more incidents and the noxious voices of anti-Semitism are on the rise. Yet this is a global phenomenon and woe to anyone who counsels “boycotting” countries in which anti-Semitism is an open sore. The turnout would be considerably smaller if that criterion were applied. To castigate one country therefore and say that that it should not be allowed to be part of the solution because it is presently part of the problem is a facile and counterproductive argument. Anti-Semitism today must be addressed without minimizing the challenge through pigeon-holing it as the naughty possession of country X or people Y.

Far more fundamentally, the critics fail to recognize that the underlying objective of this Forum is to devise proactive, smart responses to global anti-Semitism. If we are to ignore those areas of the world where the problems are most rampant then we are doing a major disservice to this basic goal. Who better to offer solutions than our FRIENDS and those fighting anti-Semitism in the hotbed countries? Better for them to come and be lectured to by their “betters” in Jerusalem…or worse still, not even be invited to attend? Barring these speakers would send a message to the true anti-Semites back home: We surrender to your antics and reject the people trying hard to put you out of business.

Any seasoned diplomat or negotiator knows that in order to resolve conflicts, one must sit down with those who think differently from you. This brave yet prudent action is by no means an endorsement of any one strategy over another and certainly does not connote agreement with the relevant parties.

Anti-Semitism is not a challenge which will be resolved through finger pointing or assigning blame. The Forum’s purpose is not simply to understand the problem or even to acknowledge its sources. The time for that stage of the investigative process is well behind us. The challenge and responsibility now is to find effective 21st century ways to reverse whatever damage has already been done and set the world on a path of greater tolerance and recognition of the dangers inherent in anti-Semitism.

One of the errors of the past is that we failed to accurately understand the true intensity of our enemy’s hatred. We naively believed then that anti-Semitism was just a passing trend which would be replaced in good order by the next popular fad. While there is no way to know for certain, perhaps our failure in analysis was because our eyes and ears were closed to the messages of others – people of good will living in the field – who appreciated the depth of the problem. History’s hindsight offers the opportunity to ensure we need never again repeat the same mistakes. This requires that we be prepared to listen to ALL voices that can help us formulate the best responses.

The stakes of failure are far too grave.

About the Author
Charley J. Levine is a media relations consultant based in Jerusalem.
Comments