We wonder if the world condemns the murder of Jews in Israel. What about our own leaders? How are they reacting? Let’s have a look at the public declarations by some of our parliamentarian by opening the Facebook pages of some of our MKs. 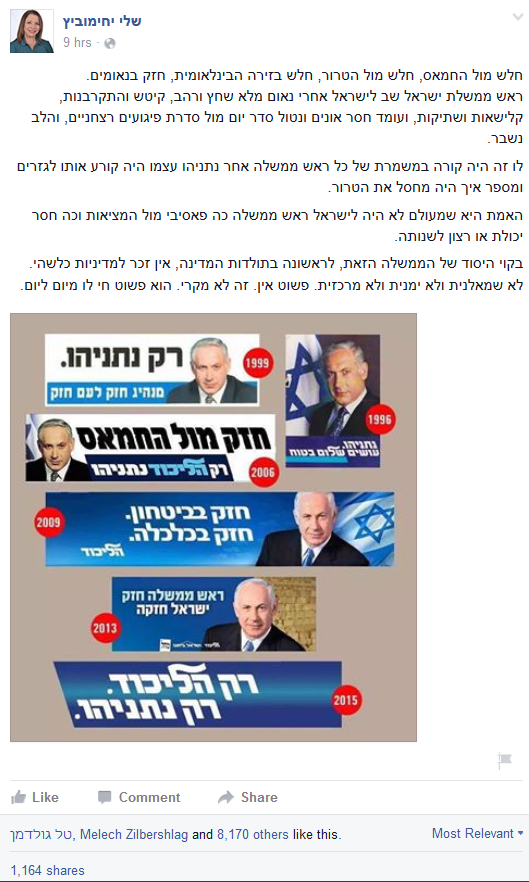 In translation: “Weak in face of Hamas. Weak in face of terror. Weak on the international stage. Strong in speeches.” She goes on to criticize Netanyahu for not having any policies and thereby allowing the security situation to degenerate as it has.

And just what does Yachimovich think she is accomplishing by blaming Netanyahu for the increasing terror attacks? Does she not see that her saying words is no different from his saying words (but he, Netanyahu, says it better)? 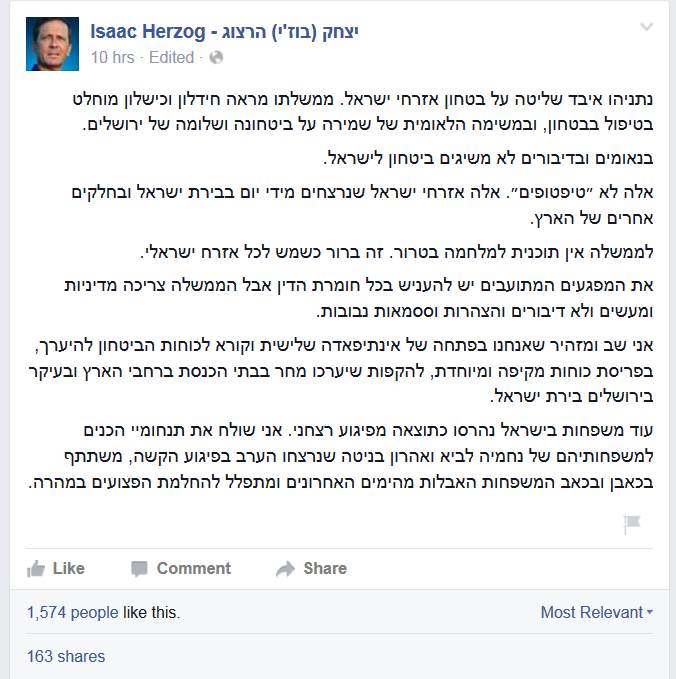 This essentially translates as: Netanyahu has lost control over Israel’s security.. . . The Government has no plan for fighting terror. . . . The vile terrorists must be punished to the full extent of the law, but at the same time there has to be a policy and actions, not just words, statements and pithy sayings.. . . Our forces need to be adequately distributed tomorrow during the holiday . . .

Does Herzog think he is adding anything new to the pot with this post?

Tzipi Livni joins in the blame-Netanyahu-fest. After expressing her sorrow for the victims and their families, she accuses Netanyahu of being responsible for the increasingly desperate security situation, claiming he has done nothing to provide safety for Israelis on our sovereign land. 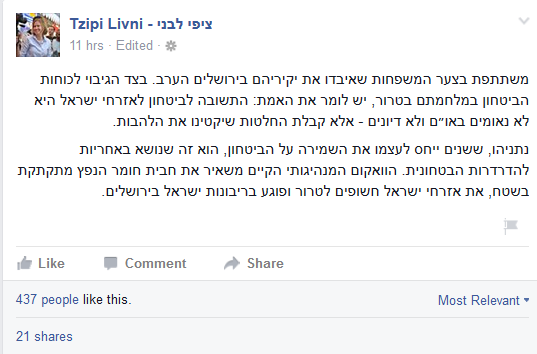 Why do Yachimovich, Herzog and Livni not publicly announce, instead of blame, something like: Am Yisrael, we are all in this together. We in the opposition, want to join in the government in efforts seeking to find a way to combat terror, to prevent the next attack (or the one after that or after that). Just invite us to the conference room and we will brainstorm with you.

And what does Zehava Galon have to say? I think we probably know exactly what she will say even before she says it: 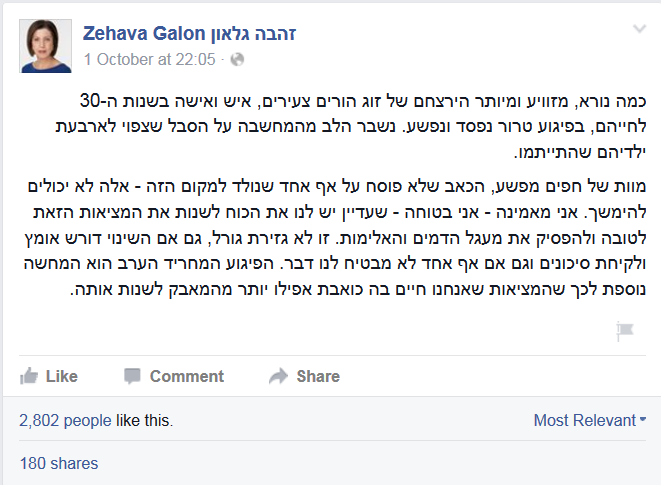 After expressing her pain and horror at the death of the innocent young parents killed in their car (she had not yet posted about the killings in Jerusalem yesterday evening), she states: “I believe, I am sure, that we still have the strength to change this reality for the better and stop the cycle of blood and violence. . . ” meaning we need to make “peace” with the Palestinian Arabs.

Just 3 hours ago, Golan added a new post in response to the two new stabbing events that occurred over Shabbat. The same rantings against the government for not making “peace”.

Discussing “peace” is irrelevant now, however – you do not discuss inflammable sheets and blankets while the bed is on fire. YOU FIRST PUT THE FIRE OUT! Then you identify the arsonists and then discuss how to deal with them.

Let’s have a look at what Ayman Ouda, head of the Joint Arab List, has to say after the bloody weekend. . .

That’s it. That’s what he had to say on his Facebook page. Nothing. His most recent post is from Sept 30 where he goes on and on about the difficulties he and other Arab Israelis have passing through both Jordanian and Israeli border crossings on their way to and from pilgrimage in Mecca.

And Ahmad Tibi? Yesterday he put up a post wishing Palestinians a good morning as if nothing had happened. And this morning? He writes that soldiers are shooting at them.

By “them” he means a group of men he is marching with in the Old City of Jerusalem. Whose side is he marching on? Guess. If you want, you can see photos of them (18 of them to be exact) on his timeline. Still not a word about the terror attacks. Did they happen in a parallel universe?

Yair Lapid last post was on Friday, after the drive-by shooting murder of the Henkin couple. He wrote about how he is telling US Senators and Congressmen/women of both parties about Naama and Eitam Henkin and how they were killed in front of 4 of their children. The world, he said, needs to know about what we are coping with. That’s fine, as far as it goes, and I wonder if he’s going to do anything constructive to help deal with the problem when he comes back home. 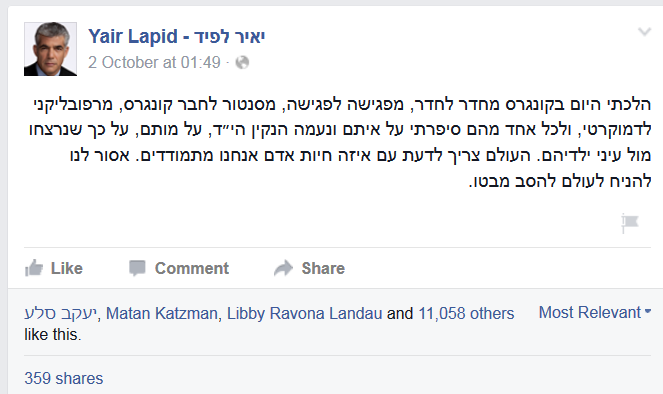 Naftali Bennet has not yet got around to posting anything on Facebook. There is no excuse for this. Even as a religious man who does not use electronic media on Shabbat or the holidays, surely he had time before Shabbat to write something in response to the killing of the Henkins; surely he had time last night or this morning (before the holiday starts) to write something about that and about the Shabbat stabbings and shootings. There is no excuse for leaving this vacuum. (I have been made aware of the fact that on Oct 1 he tweeted three actions he recommends: 1. remove the shackles on security forces that prevent the full use of their skills when called for; 2. building a new town after each attack  (Abbas will understand, he says); and 3. re-arresting the terrorists released in the Shalit deal. I prefer FB.)

And our Prime Minister? What does he write? 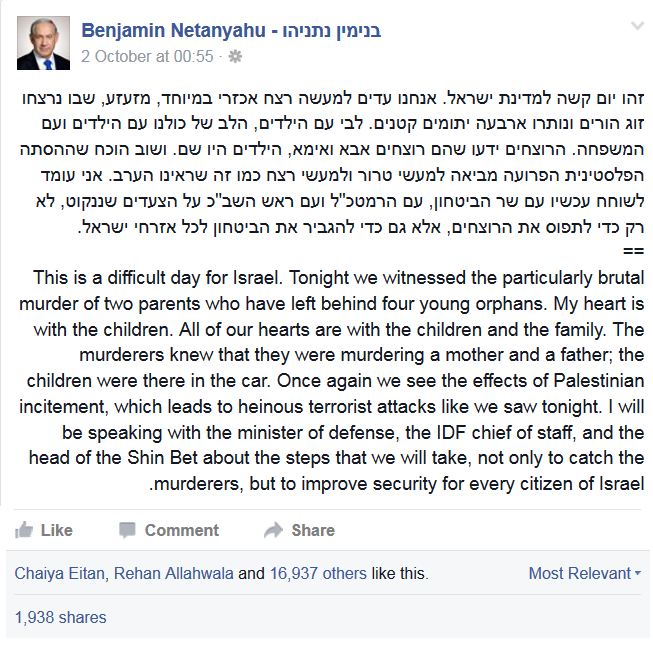 He has not yet written after the Shabbat terror attacks but I don’t suppose the message would be any different. Again he will be accused of talking the talk but not walking the walk.

So we can sum up by saying that so far our MKs are either saying nothing or saying a whole lot of stuff that adds up to nothing. And this is as our hearts are breaking.

All I want to hear now is an open invitation announced to ALL parliamentarians, regardless of party, to join brainstorming sessions in which no blame is allowed, but only constructive suggestions proposing how to break this wave of violence in order to allow enough oxygen into the air that would support, not raging fire, but human life. That does not mean looking for a solution for the Israel-Arab problem right now, but looking for a solution to the situation in which no solution seems possible.

The good thing about brainstorming is that the most ridiculous ideas can be raised and have to be written down without censure and all offerings on the list considered from multiple perspectives. Sometimes it is the seemingly silliest ideas that end up the most doable. The MKs would probably have to sign a confidentiality contract before they would be willing to engage in such a discussion. (God forbid their true ideas become known to their voters!) But it would be enough to post on their Facebook Timelines that they are participating.

Bennett perhaps got the ball rolling in his tweeted suggestions but Netanyahu chose to see this as criticism rather than suggestions. See why brainstorming is necessary?

(The final version of this post was written on October 4 at 12:30 pm. Facebook posts after that time, therefore, could not be included in this piece.)