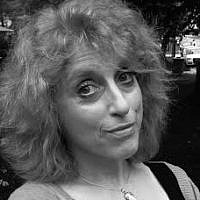 The Blogs
Rena Cohen
An Israel-born, US-raised, Israel returnee
Apply for a Blog
Advertisement
Please note that the posts on The Blogs are contributed by third parties. The opinions, facts and any media content in them are presented solely by the authors, and neither The Times of Israel nor its partners assume any responsibility for them. Please contact us in case of abuse. In case of abuse,
Report this post.

Over the past few days, I’ve had a series of phone calls with my family … one urging my daughter, who volunteered into the IDF as a lone soldier, and who is now studying in Herzliya, to get mace or pepper spray and carry it in her hands whenever she has to be on the streets …  one going through the daily checklist to assure that everyone in the family is still alright, with my mother, longtime kibbutznic and former “Peace Now” believer who has become much wiser but sadder over the years … with my son in Haifa, who also volunteered for the IDF as a lone soldier in a combat unit, was wounded during training, and completed his service despite all the pain, the frustration and the many difficulties, a call in which he is nearly shouting at me in his frustration, anger, concern for his friends and the family, and worry that Israelis will begin to be infected by the kind of hate-filled insanity that prompts a human being to go stabbing away at another human being or shooting them in cold blood because they have been told by some exploitive criminal pimp masquerading as a leader that this is a fitting target on which to inflict harm  and, if possible, death – one of “them”.

I get off that last phonecall with a feeling like I’ve just been listening to the voice, and the pain of all of Israel, and my heart hurts.

What has set the monsters out onto Israel’s streets seeking blood yet again?  I think it is fairly clear, despite the “fog of war” enveloping the whole region as various would-be power players get involved, each with his own self-awarded license to kill. There is a lot of very dirty and very bloody money flowing in the political sewers under the Middle East, and one thing has been the case for years. That money pays for violence, whether its source is Riyadh or Doha or Ankara or Tehran; whether it is brought to you at the hands of the Al Aqsa Brigades or the PLO or Hamas or Hezbollah or ISIS or Al Qaeda or some other soul-killing outfit on the list, and whether that violence comes in the form of hate speech spewed forth over the latest supposed insult or flashpoint and extolling “martyrdom” as either a “religious” or “national” duty; or whether it comes in the form of “spontaneous” demonstrations, bombings of restaurants, schools, ice cream parlors and pizzerias or the latest craze – attacks on women, infants, teenagers and men with everything from guns to screwdrivers.

Someone, for their own filthy reasons, has just opened up the dirty money spigot a little wider again, and payed for monsters to come spilling out.

There’s an article running today in the Times of Israel that talks about how both the Jews and the Arabs in the Old City of Jerusalem, where two men were stabbed to death and a woman and her infant were brutally attacked only a few short days ago, are saying that they get along as neighbors and the violence is being pushed by outsiders.  I remember a conversation with my sister, Z”L, of years ago, when the “first intifada” was being started up, telling me that their Arab neighbors had come to warn them they should get out of their mixed Jewish and Arab Jerusalem neighborhood and that they could no longer visit each other, because outsider organizers were stealing the minds of their young and pushing them to start hurting people.  I read the article, and I remember, and my heart hurts. We have all seen this horror movie before.  Someone, for their own filthy reasons, is opening the spigot a little wider again, and paying   for monsters to come spilling out.

What can Israelis do? What can people who care do? What can people who want sanity to win out do? Keep talking to the outside world, because despite the massive and determined media bias, the blindness of the smug chattering classes, the dense and completely infuriating lack of understanding displayed by people who don’t want to realize that feeling safe is a precious luxury that can easily and tragically disappear with the flash of a knife or the bang of a gun or bomb, despite all of it, some messages still manage to filter through.  It takes a lot of determination, a lot of persistence, a bit of sophistication, and more than a little bit of courage, but this is the truth:  Israeli Lives Matter – if we don’t say it, no one will.

And while we are on the subject of truths, let’s tell some more.  It is a sad truth that there are people out there posing as leaders who are doing quite well in the business of destroying the humanity of their followers and turning them into monsters for power and profit.  The sad truth is that these leaders would much rather have their people live in squalor and frustration and spend money on weapons and terror tunnels or stash it in unknown bank accounts for a rainy day than really improve the lives of those they keep claiming have been victimed.   The more chances someone feels they have for the future, the harder it is to turn that person into a mindless monster that just goes and picks up a knife, so it is part and parcel of this setup to keep people convinced that they have no future or purpose except to wipe out the future of others.  The folks who trade in this skin game have these basics down so pat, they start teaching it to kids in kindergarten and on children’s TV programs.  If you don’t believe me, check into some of the programming and songs being taught to kids on Hezbollah’s Al Manar, or Hamas’ Al Aqsa TV, or check into the Palestinian Authority’s use of dead terrorists to name some of their public schools and streets.

This can be a fairly pitiless planet, filled with beauty and grace as it also is.  We have to stand firm, and do everything possible to protect and defend ourselves, without backing down because our inconvenient facts don’t fit someone’s intellectual construct about how things are supposed to be or should be, and also without going insane, without succumbing to the deliberately-introduced contagion and becoming copies of the monsters in the streets – because the monsters can never, never be allowed to win.  If they do, much more than Israel is lost.

This one goes out in the memory of my friend Micki, Z”L, blown away by a roadside bomb just before he was supposed to get married trying to defend Israel in Lebanon. This one goes out in the grief and loss my family suffered when my sister died of brain cancer and Hezbollah was raining so many rockets down on Northern Israel that it wasn’t possible to bury her without endangering everyone’s life and her children could not stay in their home to mourn.  This one goes out in memory of living on the razor wire of fear when both of my children served in the IDF in the last clash with Hamas over their terror tunnels and rockets fired at Israeli towns and cities out of Gaza.  And this one goes out to every mother who thinks her child might be being lured to become a monster in the streets – wherever you are, here is the message – we have all suffered, as individuals, as families, as peoples — and that doesn’t justify becoming a monster in the least, nor is the past and some mercenary leader’s glory worth the price of your son’s or daughter’s beingness and life.  Hug them close, remind them that they were born to be human.  Don’t let them morph into a monster in the streets.

About the Author
A prodigal daughter -- born in Israel, raised in the U.S. and lived there on both coasts with lots of visits (even a few residential stays) to Israel, but just returned for good in 2019. Entrepreneurial generalist -- worked for others, built my own medical reporting business (with NO seed money), and since have had an extended career in the U.S. biotech industry in early startups through late clinical stage firms, holding positions in everything from investor relations and corporate communications to business development to facilities management (my current post). Longtime editor, particularly on foreign policy topics. Author of the book, LambBunny and His Friends. Blogger for The Times of Israel.
Comments