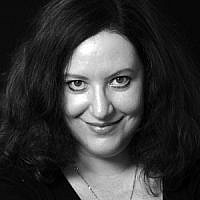 The Blogs
Karen Harradine
Apply for a Blog
Advertisement
Please note that the posts on The Blogs are contributed by third parties. The opinions, facts and any media content in them are presented solely by the authors, and neither The Times of Israel nor its partners assume any responsibility for them. Please contact us in case of abuse. In case of abuse,
Report this post.

A few months I interviewed a member of the Quaker church about a local Holocaust memorial project that he was fundraising for. I had mentioned during our telephone chat that I was Jewish. After passionately decrying genocide he causally mentioned that it was very sad to see that Israelis had turned into Nazis. Two weeks ago, while I was shopping in the high street of the peaceful UK town I live in, I heard cries of “free Gaza” coming from a makeshift stand. Two men from the Socialist Workers Party were trying to entice passers-by to sign their petition to destroy Israel. I wanted to shout back: “Yes, I agree, free Gaza – from Hamas”. Why is it that kind and upstanding citizens have such a blind spot in their morality when it comes to Israel? Why is it that some journalists in the UK who defend Israel always feel that they need to prove their credentials by stating that they support the two state solution, that Israel responds disproportionately to attacks, that the Israeli government is not perfect. I do not see similar sentiments written about Hamas or the Palestinian Authority by those journalists who gleefully lambast Israel. In their diatribes against Israel they do not write declarations like Israelis also deserve their own state, Hamas shouldn’t use human shields and that the Palestinian Authority should cease their anti-Semitic rhetoric. Where are the opinion pieces on Turkey’s occupation of Cypress, university Apartheid weeks protesting slave labour in Dubai and Facebook forums devoted to the genocide in Darfur? So while the rest of the world focuses on Israel, this tiny strip of land the size of Wales, the slaughter of innocents continues unabated everywhere else. Across the border from Israel, in hell-holes like Syria and Iraq, proper colonialism (just ask ISIS) and indiscriminate killing of children (lets talk about this Assad) are barely debated about in the media. But Israel, in trying to make sure there are no more dead Jews lying in the streets, is unfairly and continuously criticised, scorned and hated. For hundreds of years us Jews were told to go back to Palestine. Now we are told to leave Palestine. Just over eighty years ago, before the creation of Israel, Jews were accused of causing all the problems in the world. Now Israel, home to half of the world’s Jewry, is accused of the same libel. In researching anti-Semitism I have come across forums and websites in which anti-Semites fool themselves by saying that if Israel was destroyed all the world’s problems would cease. The parallels with previous sentiments expressed in Nazi Germany and Tsarist Russia about Jews are frightening. Lies which have become “truths” are used to de-legitimise Israel. Zionism is not Judaism, there were no Jews living in Israel before 1948 (I can personally refute this given that my great-great-great grandfather was born in what became Tel Aviv), Israel “colonises” the West Bank (won in a war Israel did not start) and Israel is ethnically cleansing Palestinians (strange, given the growing population rate amongst Palestinians). There are many more examples that I could quote, unfortunately. In this current conflict some UK media pundits note that not enough Israelis are dying in comparison to Palestinians in Gaza. Israel is even critisised for defending her citizens, unlike Hamas, who like to place their rockets and artillery in Gaza’s hospitals and schools. Perhaps, for those who write such drivel, a good Jew is a dead Jew. Standing up for Israel goes beyond land and identity. It is a matter of survival for us Jews. There are only thirteen million of us left in a world which seems continuously devoted to destroying us. To those armchair critics of Israel I ask the following question: what kind of world would it be without Einstein, Mahler, Freud? To the ANC government in South Africa (my birth place) I ask: where would you be without the myriad of South African Jews who fought vocally and passionately against Apartheid, often at great risk to themselves? Please try to remember this when issuing statements about Israel that Goebbels would have been proud of. Jews will no longer crawl meekly into the gas chambers. We will now fight for our survival whether the rest of the world likes it or not. Israel, surrounded by neighbors who hate her, is our safety net. Without her I fear that us Jews are doomed.

About the Author
Karen Harradine was born and raised in South Africa as part of the strong Israel supporting Jewish community there. She has an MA in Anthropology and is currently studying for another in MA, this time in Journalism. Karen works as a freelance journalist and is married and lives in Suffolk, UK. She writes on anti-Semitism, spirituality and Israel.
Comments