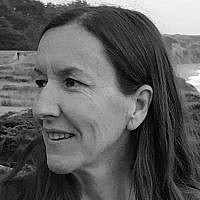 The Blogs
Rachel Landsberg
Apply for a Blog
Advertisement
Please note that the posts on The Blogs are contributed by third parties. The opinions, facts and any media content in them are presented solely by the authors, and neither The Times of Israel nor its partners assume any responsibility for them. Please contact us in case of abuse. In case of abuse,
Report this post.

Destruction and devastation surround us these days, as we witness the war in Ukraine, as we try to absorb the impact the pandemic has inflicted on us, and as the threat of climate change, present and in our midst today, wreaks havoc across the globe. A United Nations panel recently released a report with the following news:

Purim provides a framework for responding to pending calamity. In the Purim story, of course, the pending calamity is Haman’s plan to destroy the Jews, which Mordechai learns about in the beginning of chapter 4.

“When Mordecai learned all that had happened, Mordecai tore his clothes and put on sackcloth and ashes. He went through the city, crying out loudly and bitterly” (Megilat Esther 4:1).

Mordechai exhibits a very visible, public expression of mourning and public outrage. His emotional cry can be understood as an outpouring of grief as well as a call for help. In the next verse, all the Jews in the various provinces follow suit when they hear the news.  Spreading the word paves the way for others to respond as well. Not only does Mordechai not go silent, he also creates the opportunity for collective awareness, protest, communal reckoning and response.

Esther responds in a very different way. When Esther first learns about Mordechai’s very public display of Jewish mourning, she sends Mordechai clothes so that he can take off his mourning garb. He rejects this offer of clothing and requests that Esther appeal to the king to save the lives of the Jews.

Esther initially rejects this plan, reluctant to take action to save the Jews. Perhaps, she has a harder time remembering her Jewish roots and where she comes from. Perhaps, she does not want to give up the seeming security of her position inside the palace. Perhaps, as a woman, she has been trained not to speak up. Perhaps, she cannot see her own significance and the impact that she can make.

Mordechai reminds her that she should not assume that she will not perish along with the other Jews. He argues that perhaps for this very reason — to plea with the king — she has  taken on this royal position.

“…And who knows, perhaps you have arrived at this royal position for just such a crisis?”  (Megilat Esther 4:15)

In the end, of course, Mordecai does sway Esther to take action; she risks her own life by daring to approach the king against the protocols of the palace. Chapter 4 ends with Esther asking Mordechai to assemble all the Jews in Shushan and ask them to fast on her behalf while she does the same.

I love this moment. I love Esther in this moment. She displays courage, a willingness to stand with her people, defy the status quo and go against what she has been taught and trained about complying with the laws of the society, senseless as they are. I love that she finds her own voice, her own way of replying to this moment of existential threat. She builds on her relationship and connection to the king to try to save the lives and secure the future of her people.  Mordechai has his way, based on who he is and what role he plays in society. Esther has her way. She has different opportunities that she seizes because of her position inside the palace. She develops her own strategy for defeating Haman’s plan.

We, too, are facing an existential threat of a different sort, facing calamitous news on all fronts, including the recent UN report.  We can use this occasion to look within and find our unique voice, based on who we each are, what experience and expertise we bring, and what our lives look like.

We can look for the modern day luminaries in our midst, who have found their voices and are using their unique circumstances to stand against injustice: President Zelensky of Ukraine, who has emerged out of the woodwork to stand with his people and fight against incalculable odds; Yelena Osipova, a 76-year old grandmother who was arrested in St. Petersburg at an anti-war protest while carrying a sign with the words “Soldier, drop your weapon and you will be a true hero!;”  Svitlana Krakovska, the head of a delegation of 11 Ukrainian scientists who worked on the UN climate report, who said: “I started to think about the parallels between climate change and this war, and it’s clear that the roots of both of these threats to humanity are found in fossil fuels.”

What is each of our personal calling when faced with calamitous news? How can we use who we are and where we are situated to effect change?  What is the singular and distinctive impact each of us can make? What role can we play in our families, with our friends, at work, and in the community at large — to find ways to act and to make a difference and to bring about not just individual but collective action?  How can we heed Mordechai’s directive to Esther:

“…And who knows, perhaps you have arrived at this royal position for just such a crisis?”

Perhaps we are each in exactly the right place we need to be in to meet this existential moment and to act. Perhaps we are just in time to use who we are, what we know and what position we occupy to change the destructive course that we are on.

I hope that together we can respond to this moment by following Mordechai’s example of bringing about strong and powerful collective action grounded in Jewish tradition and by following in Esther’s footsteps reaching deep within to find our voice and our courage to act.