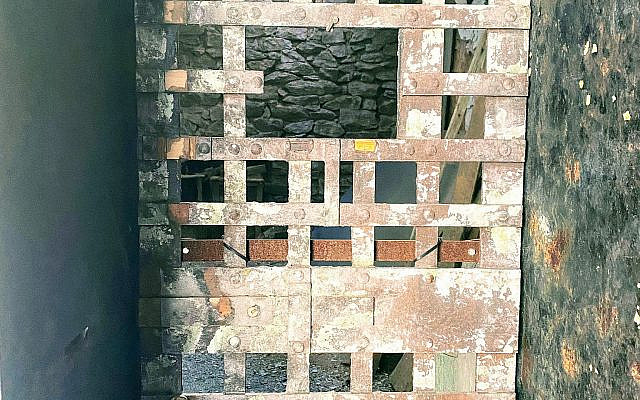 In the news this week, we learned that six hardcore terrorists escaped from the Gilboa Prison, one of Israel’s highest security prison facilities. One was a former commander of the murderous Al-Aqsa Martyrs’ Brigade and the other five were members of the terror group Islamic Jihad; four were serving life sentences.  However, more daring than their prison break, would be to seek the betterment of the Palestinian people through genuine negotiations towards their autonomy and peace.

First let, me say that it is unbelievable that the six used a spoon to dig under the sink into an existing tunnel under the prison where the structural support piles had been embedded into the ground. This has been described as a ‘structural flaw” in the prison, yet it is still incredible that these six prisoners were able to repeatedly move the sink, dig for over a year, hid the spoon behind a poster, and neither the guards nor surveillance cameras caught them. It seems like those in charge of the prison need to do some serious after-action review on everything that went wrong here. Those in charge and who failed in their mission need to be held accountable and reforms—structural and procedural—need to be put in place so this never happens again!

It is absolutely frightening to think what these six escaped terrorists could have done to harm, kill, or kidnap Israeli civilians and soldiers, or otherwise do damage or sabotage to Israel’s critical infrastructure. Therefore, it is a true credit to the Israeli police, the IDF, and the Shabak (“Security Service”) that four of the terrorists have been apprehended and quickly brought back to prison and interrogation for what and how they did it, and the other two escapees are anticipated to be caught soon as well.  But we can’t rely on heroics forever to protect us or to achieve peace. As hard as it may be to implement, while they are in prison as well as outside, we need to try to deprogram the terrorists from the hate and Jihad inspired violence that they have been taught since they were children in the Palestinian school and family systems.  Fighting terror can’t just be a military and police endeavor, but we need to fight the war of words and beliefs (including on Social Media) if we are ever to get out of the never-ending cycle of hate and terror.

Recently, I read a great book by Ya’acov Meridor called Long is the Road to Freedom, where he describes escaping five times from British prisons in the years prior to the State of Israel’s founding in 1948. Meridor was the second in command to Menachem Begin of the Irgun (“the underground”) that fought the British occupation of Palestine, their support for the Arabs against the Jews, and their cold-blooded barring of ships filled with Jewish refugees fleeing the Holocaust from ever reaching the safety of the Palestine shores. The Irgun was instrumental in undermining the British, defending the Jews, and eventually forcing them to withdraw and abandon the “British Mandate” and end the subjugation of the people of Palestine.

In context, during the British Mandate over Palestine, the British were ruthless in limiting Jewish rights, land purchases, immigration, and in disarming the Jews to prevent them from defending themselves, imprisoning them, flogging them, and even executing them by hanging or firing squad. In order to punish the Jews further, hundreds of prisoners like Ya’acov Meridor were taken from their families and exiled completely from Palestine to the darkest prison outposts in Africa. However, wherever they imprisoned Meridor—from Egypt to Sudan, Eritrea, Ethiopia, and Kenya—Meridor and many of his fellow prisoners managed to escape. Over three years (1945-48), Meridor escaped not once or twice, but an incredible five times from the clutches of the British until he made it thousands of miles from the depths of the Africa back to Israel. The Jewish patriots from the Haganah, Palmach, Irgun, and Lehi were undeterred by the gross tyranny of the British and they fought them to achieve their freedom, independence, and ultimately sovereignty as the nation State of Israel.

There is a saying that one person’s terrorist is another’s freedom fighter. Certainly, there is truth to that, but while the Jews may not be perfect and it’s not for me to play G-d, there are big differences between the Palestinian terrorists held in Israel’s jails (and those still on the loose) and the Jewish heroes and heroines that fought and struggled for their freedom from the British.

Unlike the Jews that came as refugees from the horrors of the concentration camps and expelled from a multitude of the Arab nations, the Palestinians have been supported all this time by the Arab League, the United Nations, and the West capitulating to Arab oil dependence and ongoing fight against an encroaching Russia in the Middle East. There is no question that the Palestinians have squandered billions of dollars in aid, spent decades engrossed in terror, maintained unrealistic goals to “have it all,” and passed over many chances for achieving their people’s autonomy. If only their efforts at building tunnels to escape from prison as well as to get into Israel and attack, murder, and kidnap innocents would be channeled instead toward building solid institutions to advance the governing of their people, educating and growing prosperity, and living in freedom and peace, side-by-side with their neighbor, Israel.

Additionally, the Haganah (or Jewish defense forces) believed in and practiced havlagah (“restraint”) where they would defend themselves but not actively seek to attack or hurt anyone if they could. And even the Irgun and Lehi underground fighters  primarily sought to deter the British from their Mandate and to help their people gain independence. This is very different from the PLO, Hamas, Hezbollah, and Islamic Jihad that are literally chartered and wantonly seek to kill all the Jews and “throw them into the sea.” Further, while the Jewish freedom fighters and their political representatives were willing to accept partition of the land (even as the offerings were smaller with every British policy maneuver), the Palestinians rejected every attempt at creating a two-state solution for 73 years!

The Palestinians could have had their autonomy and even statehood a long time ago, but instead they have preferred decades of war, Jihad and Intifada choosing to raise the flag of Islam over the corpses of as many Jews as they can. From the early alliance of the Mufti of Jerusalem, Amin al-Husseini with Adolf Hitler, and the desire to bring the “Final Solution” to the Jews of the Promised Land, it was never about the settlers in the West Bank, their “War of Return (of refugees),” or how much of Jerusalem they were seeking for their capital. Therefore, the Palestinians terrorists cannot be genuine freedom fighters in any sense of the word, because they are not primarily seeking freedom, but rather genocide of the Jewish people!

Palestinian terrorists truly belong in Israeli jails or as a “casualty of their occupation.” Hate and violence is the terrorists enduring legacy, because their vision is blurred by a rancid murderous ideology, rather than on the future of their people. While I am sure that there are many good Palestinians who are deserving of autonomy and opportunity, unfortunately, their corrupt leaders and terrorists have been brainwashed by radical Islam and have used the Palestinian people as political pawns leaving many still languishing in refugee camps today. In stark contrast, the Jewish freedom fighters, who also endured incredible hardships, focused their efforts towards their independence, and even those taken prisoner managed to escape again and again until they made their way back to Israel to celebrate the achievement of the independence of their people. Like many things in life, setting the right goal is half the battle, and a goal of life and freedom is a much more compelling vision and driving force than ever hate and terror will be.