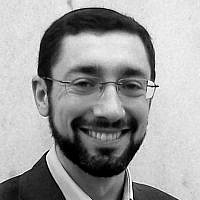 The Blogs
Ben Elton
Apply for a Blog
Advertisement
Please note that the posts on The Blogs are contributed by third parties. The opinions, facts and any media content in them are presented solely by the authors, and neither The Times of Israel nor its partners assume any responsibility for them. Please contact us in case of abuse. In case of abuse,
Report this post.

I will admit I was a skeptic. When the trustees of the Montefiore Endowment announced in 2006 that they were opening a part time rabbinic ordination program I was unsure whether it could succeed, either to attract students of the right caliber or to deliver the training necessary for the rabbinate. The scheme seemed a poor substitute for the full time semikha course run at Jews’ College, which closed in 2002.

And yet a few weeks ago, in a graduation ceremony held at Britain’s oldest synagogue, Bevis Marks, the Chief Rabbi and Rabbi Abraham Levy of the Spanish and Portuguese Jews’ Congregation conferred semikha on a second class of students, this time comprising ten new rabbis. For the most part the graduates do not want to make a career in the pulpit, but the fact remains that British mainstream Orthodoxy is now producing rabbis of its own. It is a tribute to the commitment of the Sephardi community, to Lucien Gubbay (chairman of the trustees of the Montefiore Endowment),and the London School of Jewish Studies (LSJS), the successor institution to Jews’ College which has hosted Montefiore since 2012, that the vision was realized.

For many years the conventional wisdom was that there was no demand for a London semikha course. Young men were expected to learn elsewhere and return. Some did and some didn’t, and as I bemoaned elsewhere (http://www.thejc.com/judaism/judaism-features/87078/we-must-stop-rabbinic-brain-drain), the community hemorrhaged talent. This is still a problem. I am concerned that few of the British students at Yeshiva University or Yeshivat Chovevei Torah (where I learn), or even the yeshivot in Israel, will return home. The United Synagogue dropped the ball of rabbinic education, but the Sephardim picked it up. The students came and the education at Montefiore meets the standards of the Rabbinical Council of America.

A beginning has been made, the Montefiore Endowment has shown what is possible and it must now be built upon. I hope the endowment will make it an aim to develop a full time program alongside the existing part time arrangement. The education will be greatly strengthened by putting in place several years of full time learning for the students. The establishment of the Montefiore Kollel as a preparatory scheme for the semikha program shows the commitment of the trustees to produce graduates with a strong grip on traditional texts.

An effort should be made to attract younger students, who are still in a position to choose the rabbinate as a career, especially recent graduates with some yeshiva experience behind them. If there is more money in the endowment I hope it can be used to fund stipends so that semikha becomes a realistic financial option, with perhaps some evening and weekend work on the side. A bet midrash of even ten or fifteen men, learning enthusiastically, generates a momentum that drives a Torah institution forward. Students still at university can be encouraged to learn in the bet midrash when they can, adding to the energy, and providing a group of possible recruits.

The semikha students and those learning Torah for its own sake could make the bet midrash a truly Modern Orthodox makom Torah (place of Torah), which is sadly absent from the British scene. It could become a place for those who are committed to the broad approach of men like Abraham Levy, Jonathan Sacks, and in previous generations Rav Soloveitchik and Rav Hirsch. It is appropriate that the LSJS is now in partnership with Montefiore, because the mission of Jews’ College, under great principals like Isidore Epstein, was always to bring together the best of the tradition and of modernity, to produce rabbis who understood the needs of the hour.

A serious yeshiva or kollel has to be headed full time by a true talmid hakham, a widely respected Torah scholar who is a master of the material and can inspire by example. There are already two such men on the staff, Rabbis Harvey Belovski and Daniel Roselaar. I count them both as friends and mentors. Either would be a fine rosh yeshiva. The curriculum already includes some pastoral education, but in the contemporary rabbinate it is so essential that it should be expanded further, along the lines of the courses at YCT (which pioneered training in pastoral counseling) and YU.

Finally, and this might be difficult, the Sephardi community which brought the program into being has to allow it to become a more broad based communal scheme. The Ashkenazim make up the vast majority of British Jews and the only British semikha course should reflect that. In return, of course, the United Synagogue and other Ashkenazi institutions need to contribute significant funding. I hope that the incoming Chief Rabbi, Ephraim Mirvis will make this a priority. He showed that he understood the need for higher Torah education in London when he founded a kollel at his synagogue in Finchley. Perhaps the two institutions could be brought together to the benefit of both.

After several years of neglect of rabbinic education the Montefiore Endowment showed commitment over seven years and its efforts have been crowned with success. All those who care about the future of British Judaism will want this to be the only the first step in an ever strengthening enterprise. The challenge for the leaders of British Jewry is to make that happen.

About the Author
Ben Elton is a student at Yeshivat Chovevei Torah, a Visiting Scholar at Columbia University and Rabbinic Intern at the Lincoln Square Synagogue.
Comments