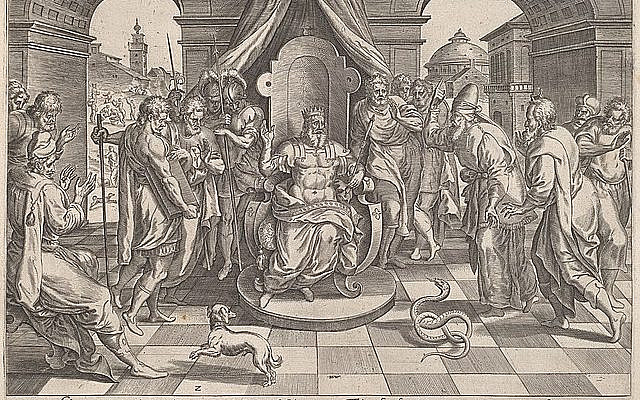 Why did Moshe never actually ask Pharoah to free the Israelites? Why was it necessary to perpetrate a fraud against Pharaoh and the Egyptians? What would have been lost had Pharaoh believed that the Jewish people were being redeemed fully to freedom and not just a reprieve?

The colloquial understanding of the Moshe-Pharoah exchange is a recursive request, denial, punishment and apology sequence. Moshe requests the freedom of his people. Pharoah denies the request and is ultimately punished with a plague and then begs for reprieve. This motif is exemplified with the iconic “Let my people go” expression that characterizes Moshe’s demands for his people’s freedom from slavery. While it is quite clear to the reader that Moshe is the redeemer and is on a divine mission to free the people from slavery, Moshe never actually makes that known to Pharaoh. In fact, he goes out of his way to disguise his true intentions of redemption. Despite colloquial perception to the contrary, Moshe never actually demands, “let my people go,” unless it is understood as a paraphrased ‘let my people go on a vacation’. The deception was necessary to provoke the utter destruction of Egypt, as will be shown, but for what purpose?

When Moshe first communes with God he is explicitly told that God intends to redeem the Israelites from slavery and take them up to the land of Canaan (Shmot 3:8,17). Moshe is tasked as God’s representative to Pharoah to achieve this goal of permanent freedom (3:10). Moshe reflects his understanding that the goal is total freedom (3:11) and he later explicitly informs the people of that intention (6:6). Yet, God alters His request in regards to how Moshe presents it to Pharoah. Moshe is to request of Pharoah only a three day holiday, not freedom (3:18) which Moshe reiterates when before Pharoah (5:1,3). In private God tells Moshe and Aharon to demand Pharoah let Israel go (6:11,13 and 7:2) however, this is meant summarily, as when the actual dialogue is revealed they again use the language of a religious holiday (7:16,26, 8:16,22-23,25, 9:1,13, 10:3).

Furthermore, Pharoah’s responses reflect the fact that he understands the request was explicitly for a religious holiday (8:4,24, 10:8). When Pharoah considers allowing the people to leave he provides permission to only a component of the population (8:21,24 and 10:10-11, 24). Obviously, this solution isn’t cogent if Pharoah understood the request was for permanent redemption. Even Pharaoh’s servants are under the impression that the request is for a temporary reprieve and are baffled by Pharaoh’s stubborn refusal despite the devastation his refusal was reaping (10:7).

This misconstrued understanding of their intentions is further reiterated upon the people of Egypt themselves as Israel borrows gold and silver and expensive clothing from their Egyptian neighbors. These items were specifically borrowed, not gifted , implying to the lenders that their possessions would be returned upon the completion of the holiday (11:2, 12:35-36). This misunderstanding was intended from the very outset as God explained to Moshe that the intention of borrowing from their neighbors was to leave with great wealth (3:21-22).

Finally, after the final plague, after his own child has died, Pharoah still doesn’t understand the true intention of freedom. He simply agrees to what he believes is Moshe’s request, permitting Moshe to “go and serve God as you have said” (12:31); emphasizing the notion of a religious holiday as the purpose of the release. This misunderstanding of their true intentions explains why Pharoah and his people had a sudden change of heart after being told that Israel had “run away” (14:5). If Pharoah had intended to let them go then they could not later be considered runaways. Obviously Pharoah and his people determined them runaways when it became clear they did not intend to return as expected. Pharaoh himself confirms that he failed to comprehend the true intention of redemption as he realizes, “What have we done. We freed Israel from our slavery” (14:5).

One might assume that the rationale for the deception was obviously to increase the likelihood of a successful escape. After all, Israel only needed a head start, as is ultimately demonstrated following the tenth plague. Therefore, it makes sense to ask for a lesser request that achieves a similar end goal to increase the likelihood of success. However, successfully acquiring permission for escape was insufficient. One of God’s goals was to prolong the process, to increase God’s miracles against Egypt so they will know that He is God (3:19-20, 4:21). This required Israel’s persistence in the land of Egypt as a function of Pharoah’s refusal for even a temporary reprieve.

Theoretically then this goal could have been achieved had Moshe demanded the more extreme request of permanent freedom, almost certainly ensuring Pharoah would refuse. Yet, God makes it clear that this too was inadequate as simply having Pharaoh’s refusal to justify the plagues was not the ultimate goal. God had Pharoah and the Egyptian people misunderstand the true intention of freedom to ensure that they would be compelled to chase after Israel to the sea to facilitate Israel’s climactic redemption (7:3-5). Had Pharoah and his people known the true intention was total redemption from the beginning then they would not have been compelled to return their slaves by force. The compulsion to chase after their lost slaves came from the faulty reasoning of sunk cost. Pharoah and his nation had already suffered dearly to deny their slaves a religious holiday. After enduring ten plagues, enormous loss of life and assets and even lending their personal wealth to their slaves, Egypt felt they had paid dearly for their Israelite slaves to enjoy their precious holiday. Allowing the slaves to escape now would have made all of that for naught. Compelled by the desire to salvage a component of their losses, Pharoah and his nation eagerly commit the remnant of their strength (14:6) to their own demise, despite their overwhelming inadequacy.

Yet still this was merely the means to a loftier end. God explains that His purpose was for Egypt and Israel to experience God’s power. Pharaoh and his people’s stubbornness was the tool to bring the plagues upon Egypt so they appreciate “that there is none like Me in all the land” (9:14) so that “I show you my strength and My name spread throughout the land” (9:16) and “Egypt will know that I am God” (7:5). The text itself attests to this agenda as the people of Egypt gradually increase in their acknowledgment that the Israelite God is the true God (8:15 and 9:20-21). When Pharoah finally recognizes that the Israelite God is real for the first time (9:27-28), God not only hardens his heart but also the heart of his people (9:34 and 10:1) as it was too early; all of Egypt must know. Ultimately, redemption cannot occur until Pharoah himself not only acknowledges God’s existence but also his sovereignty as he requests God’s blessing as well (12:32). And yet, even after all of Egypt, including Pharoah, know and accept God’s sovereignty, nonetheless God imposes stubbornness upon Pharoah and his people (14:4-5,8,17) as there was yet a loftier goal to achieve through His greatest wonder.

God’s primary goal was the fulfillment of the patriarchal covenant (6:3-5) and ensuring that Israel “knows that I am your God that brought you out from your slavery in Egypt” (6:7). This knowledge is only adequate when it compels Israel to “tell your children and grandchildren the calamity I brought on Egypt, and my signs I placed on them, so that you will know that I am Hashem” (10:2). But even after all the plagues and miracles Israel still harbored doubts as to their confidence in God’s power to provide and care for them. Regretting their reprieve from Egypt as they stood before the sea with the Egyptian army at their backs ready to return to Egypt rather than face certain doom (14:11-12). Only once Israel witnessed the destruction of their oppressors through an unequivocal expression of divine power was the process complete as Israel finally “believed in God and his servant Moshe” (14:31).

The Israelites were satisfactorily inspired by these awesome events to compel their allegiance. However, just as words alone were not enough to assuage the doubts of Israel, so too the later generations need more than the words of their parents. Knowledge comes through experience, requiring subjective involvement. God’s awesome strength is only partly revealed to the reader by the stories of His power and the veracity of that strength by ancestors. The most impressive endorsement of God’s awesome power derives from comprehending the masterful orchestration of events manipulating Pharoah and the entire Egyptian nation to actively manifest His ultimate goal. A symphony of events too obscure to be appreciated by those living through them, but awesome to those reliving them in text. The deception, the plagues and wonders were the means to an indelible impression on Israel, the fledgling nation; to communicate both the awesome terrifying power of God as well as his enduring love for his people, for all time.