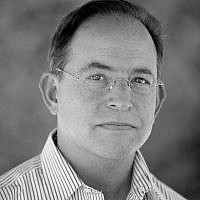 The Blogs
Nathan Laufer
Apply for a Blog
Advertisement
Please note that the posts on The Blogs are contributed by third parties. The opinions, facts and any media content in them are presented solely by the authors, and neither The Times of Israel nor its partners assume any responsibility for them. Please contact us in case of abuse. In case of abuse,
Report this post.

What qualities of character should we be seeking in our leaders? In my book, The Genesis of Leadership, I argued that the fundamental goal of leadership is change. Unlike managers, whose purpose is maintaining the status quo, leaders must persuade their followers to move from the status quo towards a different, hopefully a better, future. Yet, paradoxically, as individuals and as groups, we all experience change, even change for the better, as loss. One who doubts the veracity of this claim need only scan the Book of Exodus, which we begin reading this week, to note how many times the Jewish People hanker to return to Egypt. Listening to the Israelites longing to return to their former house of bondage makes the unassuming reader think that Egypt was more paradise than purgatory for the Jewish people.

The chasm between the goal of leading change, and the resistance to change by one’s followers makes leadership a tension-filled enterprise. For the person attempting to lead, this tension, if not carefully monitored and managed, can become downright dangerous. Even if not leading to actual physical injury, as sometimes happens in political assassinations, the potential injury to one’s reputation resulting from the challenge of leading change is no small matter. Ad hominem attacks can leave permanent scars on the leader. This is part of the leadership challenge.

To meet this challenge, the most important qualities of character that a leader must possess are caring and courage. Without caring, the leader will not bother taking the risk of leadership and generate change in the first place. Why risk one’s self, one’s reputation, and one’s standing in the community unless one cares passionately about the outcome? Why put up with stinging personal attacks designed to derail the change effort unless one cares so deeply about the group, that one is willing to risk all the opprobrium to help the group reach its “promised land”?

But caring by itself is not sufficient. Courage is the essential currency of leadership. Even if motivated by caring, one needs to have the internal mettle to defy convention, the internal fortitude to sail against the wind and the self-assurance to run counter to the prevailing wisdom. One needs a “thick skin” to put up with the taunts of friends and foes alike if one is to have the staying power of leading change.

The second and fifth chapter of this week’s Torah portion underscores these points. With Pharaoh’s ominous decree of infanticide lurking in the background, the Torah’s narrative focuses in chapter two on a sequence of tales about courage and caring surrounding the birth and life of Moses. The people who parent and raise Moses are all people who embody these qualities of character: Moses’ father who defies Pharaoh’s decree in order to build his family and the Jewish People; Moses’ mother who risks hiding him and then never seeing her son again by placing his basket in the Nile; Moses’ sister who watches over him and rushes in to protect his needs; and Pharaoh’s daughter whose compassionate caring for the infant Moses causes her to adopt the child as her own and ignore her father’s authority and decree. Clearly, in the first ten verses of the chapter, the Torah depicts the people who nurtured and influenced Moses as being exemplars of caring and courage.

Then there is Moses himself, who, when he grows up, shows the combination of these very same leadership qualities. In a trilogy of stories found in Exodus 2:11-22, Moses saves a fellow Jew from the brutal beating of the Egyptian taskmaster, insinuates himself in a quarrel between two Jews when he perceives one as being unjustly aggressive, and rescues Jethro’s seven daughters from the intimidating tactics of a gang of Midianite shepherd bullies. In all these instances Moses displays the caring to get involved, and the courage to act despite his awareness that it may not be in his best personal interests to do so.

Towards the end of the Torah portion, when Pharaoh scorns Moses, and the Israelite overseers take him to task for worsening their situation, these twin attributes of caring and courage come into further bold relief. They prompt Moses to movingly and courageously confront God for failing to rescue His people. It is in that final act of poignant caring for his people and authentic courage in the face of God, that we come to deeply understand and appreciate why God chose Moses to lead His nation and why we should be seeking these same qualities of caring and courage in our leaders today.

About the Author
Rabbi Nathan Laufer is former Director of Israel Programs for the Tikvah Fund and President Emeritus of the Wexner Heritage Foundation. He is the author of Rendezvous with God (Maggid Press, 2016), Leading the Passover Journey, and The Genesis of Leadership (Jewish Lights, 2005, 2006).
Related Topics
Related Posts
Comments