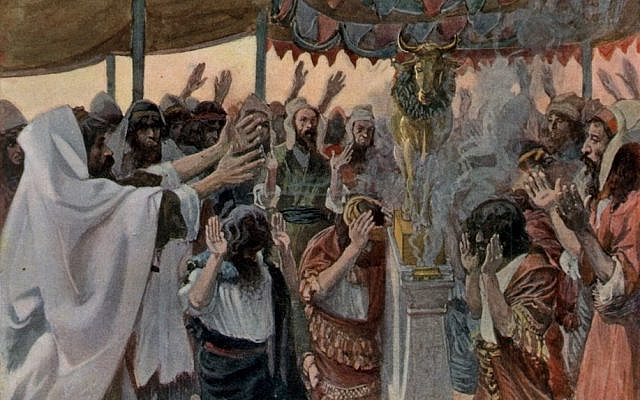 The authors of the Midrash were fascinated by the dialogue between God and Moses after the episode of the Golden Calf. They were intrigued by the fact that Moses succeeded in persuading God to forgive the Israelites and give them a second chance, rather than carrying out his threat to wipe them out in the wilderness.

According to the narrative in the Torah, Moses’s impassioned plea on behalf of his people began with a reasoned entreaty. He asked what the Egyptians would say if they heard that God had freed Israel from slavery, only to destroy them in the desert. From our perspective, this seems like a rather trite argument to put to an all-knowing God. Indeed we tend to see the whole conversation, not as Moses succeeding in persuading God but as God testing Moses, to see how outspoken he was prepared to be in the defence of his people.

But one Midrash takes a radically different view. Rather than understanding the passage as Moses trying to reason with God, it treats Moses as challenging him. It bases its interpretation on the phrase: And Moses entreated God. The Hebrew verb usually translated as to entreat can also mean to mollify, or sweeten.

The Midrash recalls an incident shortly after the Israelites had crossed the Red Sea. They came to the oasis of Marah, where the waters were bitter and undrinkable. The Midrash speculates that when he discovered that the water could not be drunk Moses despaired. He said, “What is the point of these waters? What benefit do they bring to the world? Far better had they never been created.”

When he heard this, God rebuked him. “Aren’t these waters my creation? Is there anything in the world that has no purpose? What you should be saying is: ‘What can I do about this? How can I make these waters sweet?’” God then showed Moses a piece of wood. He picked it up, threw it into the water, and it became sweet.” The lesson that Moses learnt at that moment was that there is a remedy for everything, everything can change.

After the Golden Calf, with God threatening to destroy the Israelites, Moses saw the opportunity to repeat the lesson back to his teacher. He ‘sweetened’ God by reminding him of how he had taught him to sweeten the bitter waters. “Didn’t you say to me at the oasis of Marah that I should pray for you to show me how to sweeten the waters? Now show me how to sweeten the bitter decree you have imposed on Israel.” Just as God had showed him how to change the waters, Moses asked that he be shown how to change the Israelites.

It was Moses’s challenge that God show him what to do which led to the fateful decree being rescinded. God had placed the fate of the Israelites firmly in Moses’s hands. It wasn’t for God to change his mind; he’d always known what was going to happen. It was for Moses to show leadership, to challenge God, to take responsibility for the Israelites’ error and bring about the necessary changes in his people.