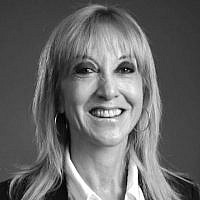 The Blogs
Karma Feinstein Cohen
Apply for a Blog
Advertisement
Please note that the posts on The Blogs are contributed by third parties. The opinions, facts and any media content in them are presented solely by the authors, and neither The Times of Israel nor its partners assume any responsibility for them. Please contact us in case of abuse. In case of abuse,
Report this post.
Moshe Arens passed away on January 7, 2019 and was a lifelong Jabotinsky movement leader who assumed many vital Israeli government posts in his lifetime. He was Israel’s Defense Minister in multiple administrations, Foreign Affairs Minister, Knesset Member, and Israeli Ambassador to the U.S. It was in his last role as Ambassador, in the 1980s, that he helped to launch Benjamin Netanyahu’s public career when he brought Bibi to Washington to work with him at Israel’s Embassy as his Deputy Chief of Mission. This was Netanyahu’s first role in government service after his Israeli army enlistment.
Arens was actively writing until the very end of his life and his final opinion column for the Haaretz newspaper published on December 27 was about the Warsaw Ghetto Uprising. Arens had made the study of this campaign of Jewish armed resistance during the Holocaust a key focus of his work in the years following his retirement from politics. The English version of his book “Flags Over the Warsaw Ghetto” was released by Gefen Publishing in 2011.
Arens had been a senior leader of Betar in his younger years in the US and was clearly fascinated by the history of the movement during the Holocaust and its role in fighting the Nazis.
On January 18, 1943, the first organized and armed Jewish/Zionist resistance action in the Warsaw Ghetto was launched. The fighters of the both the ZZW and the ZOB drove the Nazis from the Ghetto. Months later, on April 19, 1943, on the eve of Passover, the Nazi SS and police units entered the Ghetto and were attacked by organized Jewish fighters in force.
The most famous Jewish leader of armed resistance during the Holocaust was Mordechai Anielewicz, commander of the ZOB (Jewish Fighting Organization) during the 1943 Warsaw Ghetto Uprising. Anielewicz received paramilitary training in Betar as a young teenager and left Betar before the war. The ZOB had a socialist orientation and Betar members did not join it.
The Jewish Military Organization (ZZW) was the other armed resistance group in the Warsaw Ghetto Uprising. The ZZW was led and manned by Betar members who were joined by their partners from other components of the Jabotinsky movement as well as other allies. Betar’s fighters in the Warsaw Ghetto Uprising were largely written out of history by the Left. Articles by Arens about the ZZW were published in Yad Vashem Studies, Haaretz, and The Jerusalem Post. These articles did much to create a far more accurate account of the ZZW’s participation in the Uprising than before Arens took up the cause of setting the record straight.
Betar’s fighters in the Warsaw Ghetto Uprising had been largely written out of history until Arens decided to right this significant wrong. His book “Flags Over the Warsaw Ghetto” and his articles broke new ground in creating a far more accurate account of the ZZW’s participation in the Uprising. The heroism of Pawel Frenkel, ZZW’s commander, was virtually unknown until Arens began to write and publish about the Ghetto.
The ZZW is now thought by historians to have been the better prepared and equipped force in the Ghetto. They had procured multiple machine guns and the ZOB had not. The ZOB, however, had more fighters.
The groups finally decided to coordinate their efforts in the very last moments before the April 19 battle began. For 28 days, Jewish warriors fought the Nazi enemy and showed bravery not seen since the days of Bar Kochba’s uprising against Rome.
Betar was founded in 1923 by Ze’ev Jabotinsky (1880-1940), a figure who Arens revered but is too often forgotten today, especially by American Jews. Professor Daniel J. Elazar (1934-1999) was a scholar of the Jewish political tradition and in the May 15, 1981 issue of the journal Sh’ma Elazar remarked about Jabotinsky’s legacy:
“Would there be serious public commemoration of the 100th birthday of Zev Jabotinsky had it not been for the fact that the Likud won the election in Israel in 1977? Not likely. For thirty years and more, Jabotinsky was one of those non-persons in Israel and the Jewish world… The ruling Labor Party made him a non-person for the same reasons that it portrayed Menachem Begin and his supporters as uncivilized fascists—it is easier to beat the opposition by painting it as irrelevant, intolerable and non-existent, until it is too strong to be dismissed.”
Without the work that Moshe Arens did in his retirement the heroism of the ZZW would have been lost to history as well. This small aspect of his lifelong love and devotion for Jabotinsky Zionism should be recalled now that Arens has passed away. Those Ghetto fighters he admired so much embodied the very same Zionist ideals he showed throughout his life. We should all study those ideals in his memory for Arens was a rare individual who was a history maker on the world stage as well as a gifted, world-class historian.
[This essay was written with the assistance of Moshe Phillips, the national director of Herut North America’s U.S. section. More information about Herut is available at https://www.herutna.org]
(The author is the Executive Director of World Herut and World Magshimey-Herut. Herut is an international movement for Zionist pride and education.)
About the Author
Karma Feinstein-Cohen is the Executive Director of World Magshimey-Herut and World Herut which she founded in 1999.
Comments