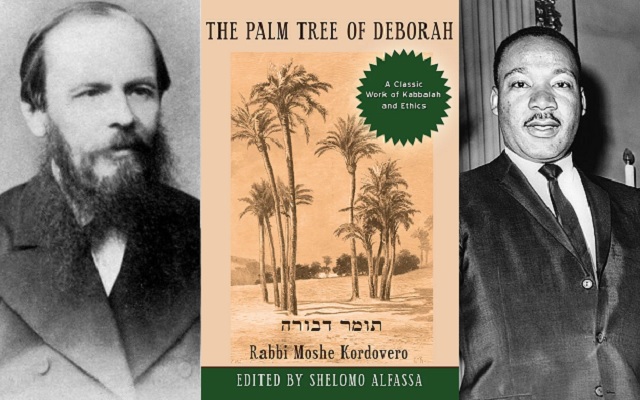 Dostoevsky, Martin Luther King and one of the editions of a book by Moses Cordovero

In his 1872 novel “Demons”, Fyodor Dostoevsky anticipates the occurrence of socialist revolutions and condemns the search for social improvement on the basis of violence and hatred.

Also translated as “The Devils” and “The Possessed”, the Russian novel is a severe criticism of those political movements which seem to believe that “liberation” is the same as “destruction”, and according to which the policy of hatred is the best thing to do at any time.

Dostoevsky was right, as usual.

The Russian writer offered the public a powerful warning against the mistakes soon made by Leo Tolstoy and others who believed that populism is enough for nations to attain happiness.

However, by denouncing “progressive” nihilism in social affairs Dostoevsky also added magnetism to the problem. His prophecy was in part a self-fulfilling, negative anticipation.

The Russian thinker refused himself the sacred chance to point out mainly the right path, instead of paying too much attention to the danger while planting unfortunate images in people’s subconscious.

He did not think of a healthy future with enough strength, yet he tried to help and did his best. Hypnotism and psychic suggestion are part of life. Their influence must be reduced as much as possible. If one wants to have a sane future, inevitably one must think about it, visualize it as healthful, work for it and dream about it.

Of course, extreme Left and extreme Right are twin brothers in disguise. It is rather easy to see in the 21st century that to every form of right-wing hysteria, a form of left-wing hysteria directly corresponds. The same applies to schizoid views of life and psychotic wishes to physically eliminate adversaries. Adolf Hitler and Joseph Stalin had much in common.

Regarding mentally unbalanced attempts to control entire nations and society as a whole, narrow-minded Left and Right are both happy to wash brains and dominate minds on a large scale. They are inclined to use fear as a weapon at conscious as well as subconscious levels of psychological warfare. They have no future and soon destroy themselves, as Nazism and Fascism did.

The subconscious influence of art and literature regarding the future is greater than many imagine. Literature often inspires and anticipates social events. Since the 18th century some of the best writers and artists have alternated between prophecies of collective horror and suffering – like Dostoevsky and Orwell -, and prophecies of naïve socialism and utopia, like Leo Tolstoy and Maxim Gorky. As a result, it is only logical that in the 21st century we have to face a few serious problems before strengthening our ability to think in correct ways of our common future, and before building enough good karma for the next centuries.

It is often easy to demolish and destroy.

In the absence of good sense, it does not take long for pain to become frustration, and for frustration to turn into active hatred. Then comes the lust for violence, which feeds on itself. The whole process is unintelligent and worthless.

Collective hatred and mass psychosis can and ought to be avoided. Political moderation paves the way to true liberty of thought. Free and independent thinking is the opposite of blindly repeating aggressive slogans, however “fascist” or “progressive”.

The goals adopted, both conscious and subconscious, define the course of individual and collective Karma. Help can be found in surprising ways, once the right purpose is established in one’s soul. Martin Luther King offers us a healthy point of view from which to look at society. His dream of unity in diversity is universal:

“…When we allow freedom to ring”, he said, “when we let it ring from every village and hamlet, from every state and every city, we will be able to speed up that day when all of God’s children, black men and white men, Jews and Gentiles, Protestants and Catholics, will be able to join hands and sing in the words of the old Negro spiritual, Free at last! Free at last! Thank God almighty, we’re free at last!” [1]

King firmly denounced the use of “popular violence”, which can only bring more destruction.

The path of wisdom and harmlessness is not easy, yet it is the only road to improvement. Martin Luther King said on the same occasion:

“There will be neither rest nor tranquility in America until the Negro is granted citizenship rights. We must forever conduct our struggle on the high plane of dignity and discipline. We must not allow our creative protest to degenerate into physical violence. Again and again we must rise to the majestic heights of meeting physical force with soul force.”

In Western thought, the philosophy of One Nation, first formulated by Benjamin Disraeli, expresses in our civilization the practical principle of universal compassion. In Eastern philosophies, the constructive activism of Vinoba Bhave, the follower of Mahatma Gandhi, constitutes another key.

Regarding the significant obstacles along the road to brotherhood, Sigmund Freud can help citizens understand the recurrent nightmares present in human subconscious.

As soon as citizens make the firm decision to morally improve themselves and their civilization, hundreds of positive factors and helpers of all kinds will become visible, from different centuries and nations, and the task will be seen as much easier.

The victory of justice and brotherhood can take place as soon as the necessary number of honest citizens exists. Till then, one must live with the fact that human nature is imperfect, and has to be improved from within. It is wise to implement the politics of the immortal soul and the policy of the heart. Rabbi Moshe Cordovero could teach us a few sociological lessons.

The Politics of Moshe Cordovero

Centuries ago, members of the Jewish community of Safed followed a course of instruction in the Kabbalah tradition, laid out by Moses or Moshe Cordovero (1522–1570).

The teaching shows the same ethics and wisdom present in the best parts of other religions and philosophies, and at sane communities around the world. [2]

1) Forbearance in the face of insult.

3) Pardon, to the point of erasing the evil suffered.

6) Mercy, to the point of recalling only the good qualities of one’s tormentor.

7) Eliminating all traces of vengefulness.

8) Forgetting suffering inflicted on oneself by others and remembering the good.

9) Compassion for the suffering without judging them.

11) Mercy beyond the letter of the Law with the good.

12) Assisting the wicked to improve without judging them.

13) Remembering all human beings always in the innocence of their infancy.

These fundamental principles can inspire a balanced attitude regarding social problems. Attempts to mechanistically apply them to each nation and every aspect of society would be useless, but walking towards them step by step is wise.

As a commentary to item 10, “Truthfulness”, one could remember a couple of sentences by Helena P. Blavatsky.

“Our motto was from the first, and ever shall be: ‘THERE IS NO RELIGION HIGHER THAN TRUTH.’  Truth we search for, and, once found, we bring it forward before the world, whencesoever it comes.” [3]

Truth, of course, is unbiased and wishes to defeat no one. Hate is a passing illusion, while unconditional respect and realistic cooperation are enduring parts of reality.

[1] Dr. Martin Luther King, in his famous 1963 speech “I Have a Dream”, which is easy to find on the Internet and elsewhere

* “Getting Rid of Rousseau’s Delusion”; * “Political Left, Ethics and Brotherhood”; * “The Philosophical Value of Democracy”; and * “Freedom From Mind Manipulation”.
___

Martin Luther King’s photo is from the New York World-Telegram and Sun collection at the Library of Congress. According to the library, there are no known copyright restrictions on the use of this image. The photos of Dostoevsky and of Moshe Cordovero’s book are also copyright free.