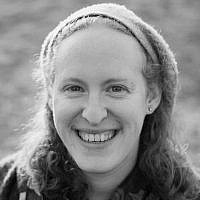 The Blogs
Rachel Kravetz
Apply for a Blog
Please note that the posts on The Blogs are contributed by third parties. The opinions, facts and any media content in them are presented solely by the authors, and neither The Times of Israel nor its partners assume any responsibility for them. Please contact us in case of abuse. In case of abuse,
Report this post.

In the shift from Bereshit to Shemot, we see the Jewish people go from a thriving nation to a persecuted people. As quickly as we said “Chazzak Chazzak V’Nitchazek,” we see our ancestors literally beaten down and oppressed. At the beginning of this week’s parsha, God comes to Moshe and says “When I appeared to your forefathers, I was called ‘El Shaddai’ but not ‘YHVH’” (Exodus 6:3). What is the meaning of these two names? What is the difference between the relationship our forefathers had with Hashem in Bereshit, vs. the relationship that Moshe, and soon the whole nation, will have in Shemot and beyond?

In Genesis 17:1, Hashem enters into a covenant with Avraham promising that he will become a great nation. Rashi says the name “Shaddai” can be broken up into: “I am He whose (ש) Godship suffices (די) for every creature.” As if to say that Hashem’s presence and promise to Avraham was enough on which to thrive in Bereshit. In Shemot, however, even though the nation has grown in number as promised, they have not grown together under one cause. The knowledge of Hashem as creator of the universe was no longer sufficient to protect the Jewish people. They needed something greater to unite them under one cause. They needed to see that Hashem is there with them at every moment, sees them in their pain, and seeks to answer their cries. Even the letters YHVH mean “was, is, and will be,” similar to what Hashem says at the burning bush: “I am that what I am” (Exodus 3:14). In this week’s parsha, when God says “You will know I am Hashem” (Exodus 6:7), now using the name YHVH, implies that our relationship with Hashem is no longer a passive creator looking down on his creation. Rather, that Hashem will act on our behalf, and that we will be unified to serve Him.

The way Hashem plans to unite the people is through a large show of divine power. Hashem says “I will harden Pharaoh’s heart, that I may multiply My signs and marvels in the land of Egypt” (Exodus 7:3). But then the question becomes: Were the plagues meant for the Jewish people to believe in the strength and wonder of Hashem? Or were they for the Egyptians? As it says, “And the Egyptians shall know that I am the Lord” (Exodus 7:5).

Rabbi Lord Jonathan Sacks z”l addressed this question in his parsha podcast from Vaera 5780. He asked: How can we hold Pharaoh responsible for his actions if Hashem hardened his heart? Rabbi Saks went on to explain that the Egyptians believed that when they die, their heart is weighed against a feather in order to continue on to the afterlife. They have written in their tombs “I have not committed murder, I have not committed violence” among many other confessions (Papyrus of Ani). Yet Pharaoh had already committed these injustices before Hashem stepped in. He ordered the murder of Jewish babies, and directed the back-breaking labor of the Jewish people. The hardening of Pharaoh’s heart was just a reflection of the crimes he had already committed. Hashem’s demonstration of might and power was to show both the Jews and the Egyptians that justice will prevail.

The messenger Hashem choses to enact that justice is Moshe. But why choose him, who cannot truly speak for the people, as he has not suffered alongside them, and self-admittedly is not a good speaker?

To answer this question we can look to the many women Moshe had in his life. Moshe’s mother Yocheved (according to the Midrash) is identified as one of the midwives who Pharaoh instructed to kill the newborn baby boys. She defied Pharaoh saying that “the Hebrew women are strong, by the time we get there, they have already given birth.” (Exodus 1:19). She set the example of saving lives even at risk to her own, and supporting other women in the process. Moshe’s sister Miriam, also said to have been one of the midwives, watched over baby Moshe in the basket after Yocheved placed it in the Nile. When she saw that it had reached Bat-Pharaoh, she spoke up and suggested bringing Yocheved in to nurse him. Not only did she ensure his safety, but also provided some comfort to her mother, who got to continue to have a relationship with Moshe until he was weaned.

Bat-Pharaoh knowingly takes in a Jewish child against her father’s orders, either out of kindness or knowing that her fathers decree was wrong. She must have raised Moshe with a strong sense of justice, as the first time he sees the affliction of his people, he wants to make it right. Rabbi Saks points out that we see Moshe attempt to seek justice regardless of the victim. He sees an Egyptian hitting a Jew, a Jew hitting another Jew, and the shepherds harassing the daughters of Yitro. By presenting each case, the Torah shows us that Moshe’s sense of justice is impartial. That justice should be universal. This is what makes him the right leader for this moment.

When powerful leaders are more committed to maintaining their own power, they stop acting in the best interest of their people. When we witness this type of unjust behavior we are obligated to speak up and do whatever we can to make things right. Although we may not live in a generation where we witness obvious miracles from God, we must make it clear that we stand up for our values of justice and morality.

About the Author
Rachel Kravetz is an occupational therapist working at CTC Academy, a school for children with disabilities. She is the events coordinator for the 'yoetzet halacha' program of Fair Lawn, NJ, and is passionate about creating meaningful spaces to discuss women's health and education.
Related Topics
Related Posts
Comments