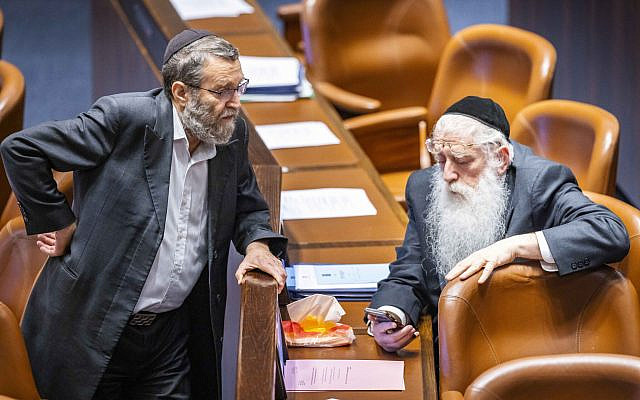 MK Moshe Gafni (left) with United Torah Judaism (UTJ) party colleague Meir Porush, in the Knesset, June 22, 2022. The UTJ party is one of two ultra-Orthodox parties in Knesset that will not include women in their lists. (Olivier Fitoussi/ Flash90)

Only three weeks are left before the finalization of party slates for Israel’s forthcoming November 1st general elections. By this Tuesday evening, only six parties will have selected their lists democratically, either through primaries (Labor, Likud, Meretz and Religious Zionism) or by internal party vote (Hadash and Balad). Over 60 percent of the lists have yet to be determined, some directly by party leaders and others by narrow selection committees. This is the last chance to augment Israel’s deteriorating record of gender representation (as of 2021, 72nd globally, down from its 44th slot in 2001) and move it forward into the third decade of the 21st century.

All the numerous achievements of Israeli women at the forefront of science, hi-tech, academia, social services, law, medicine, education, and even defense may amount to very little if the gender gap in power is not rectified. The largest divide between men and women (a full 67%!) is in the sphere of economic and political power — much more than the worrisome gap of 40% in income and position in the labor market). Since 2015, when 27 women (23%) were voted into the 19th Knesset, the number of women actually elected in each of the subsequent rounds has grown only by 2 — to 25% in the outgoing 24th Knesset (in actuality more women, placed in the lower rungs of the party lists, served in each parliamentary term due to the invocation of the alternative member clauses, known in Israel as the “Norwegian Law”). Most of the rest of the world has experienced far more significant growth during this time frame, even in an increasingly authoritarian environment. So, what has happened to women in Israel and why? What steps can be taken now to salvage this situation?

The first part of the answer lies in assuring a numerical increase in the number of women in realistic places at the forefront of the party lists submitted to the electoral commission. This no easy task. In the last round of elections last year, five of the 13 lists that mustered enough votes to gain entry into the outgoing Knesset initially boasted no women on their lists (and two ultra-Orthodox parties — United Torah Judaism and Shas — are fundamentally opposed to women in elected office). The other parties fared somewhat better, with Labor (with its zipper gender parity system) and Meretz (which mandates at least 40% for each five candidates on its party list) the only ones with anything resembling gender equality.

The reasons for this obvious inequity are not hard to come by. In a country that places matters of security and defense at the top of the national agenda, women are systematically shunted to the sidelines. Even when they fill some of the most delicate posts in this sphere (such as the just revealed chief of intelligence and head of the Iran desk in the Mossad, among many others), they are generally deemed to be second fiddle to men on these issues. Unlike in other countries in the democratic world, no Israeli woman has ever held the post of minister of defense or chair of the Foreign Affairs and Defense Committee of the Knesset. Only one, Golda Meir, ever served as prime minister, and it has taken over 50 years to begin to revise the almost lethal assessment of her handling of the 1973 war.

Women have also been allotted mostly secondary roles in other key priority areas. The economy, now the focus of intense interest, is one example: no woman has ever served as minister of finance or as chair of the powerful Finance Committee of the Knesset. Education — which has boasted several female ministers, including the incumbent, Dr. Ifat Shasha-Biton — is still a stark example of a feminized profession largely run by men at the apex of its sprawling apparatus. No woman has chaired the vital Law, Constitution and Justice Committee of the Knesset, although women have presided over the Supreme Court. The bottom line is clear: women in elected office have been mostly assigned to peripheral social service positions (and still, since 1949, the Knesset has had only two women at the head of its Labor and Social Welfare Committee). The list goes on.

The structure of Israel’s parliament — and hence of its ruling coalition even today, when nine women serve in ministerial positions — is decidedly gendered. This is a reflection of the deep gender discrepancy in the nexus of power in the country, best articulated by an unabashed misogyny which rules public discourse on all sides of the political spectrum (a mixture of fear and an embedded culturally-driven and religiously-reinforced patriarchy).

Efforts to alter these patterns have been thwarted in recent years by the twin perils of systematic democratic backsliding and rampant political instability. The absolute number of women in the next Knesset will not reach the level of the outgoing one. The Likud is already down to a mere six in the first 35 places; even if one or two are appointed to fill the slots held by the party chair, that will leave it with less than the 27% of its 30 members elected barely over a year ago). The situation in parties to the right of the Likud appears even more dismal. On the left, Ra’am has placed a woman in the fifth, unsure, spot. Veteran MK and feminist Aida Touma Sliman had to undergo two rounds to scrape out a 53% majority last week in Hadash.

This leaves all the others with the burden of making sure that their actions reflect their promises. Yesh Atid, Yisrael Beytenu, the newly-minted, general-heavy National Unity Party, and even Yemina, led by Ayelet Shaked, have the main task of beefing up the percentage of women at the forefront of their slates. Descriptive gender representation, commonplace elsewhere, remains the key indicator of democratic vibrancy, even in the most conservative electoral systems today.

Bridging the numerical gender gap is essential for democratic rule; it is, however, not sufficient. To ensure the institutionalization and activation of the essential norms of equity and equality, it is necessary to assure the substantive representation of feminist principles, outlooks, and modes of behavior. The inclusive embrace of these fundamental guidelines is not just the task of women, as, even in the most gender advanced countries, women in elected office suffer undue discrimination and constant scrutiny (vide Prime Minister Sanna Marin of Finland).

Feminism, past experience has shown, is promoted by both men and women devoted to the creation of a just society through equitable social change. Israel’s first affirmative action laws were introduced by men. Legislation advancing parental leave for men as well as women has been a joint effort for over two decades. The push for a gender-sensitive Knesset, reflecting not only full representation for diverse groups of men and women, but also adequate power for women in the internal hierarchy of Israel’s parliament and in the determination of its mode of operation, has yet to be realized. And this cannot be achieved without many more women in elected office and many more avowed feminists in all parties.

The alarming escalation of violence against women, femicide, and instances of serial sexual harassment that make new headlines on a daily basis — not to speak of deep economic and social inequities — are but the outward manifestations of these entrenched gender disparities. But women are not victims. They are agents who have the knowledge, skills, and capacity to shape their fate and mold their society.

This challenge cannot and will not be overcome without dealing head-on with the core structural underpinnings of gender inequality in Israel. The placement of women committed to this cause in top positions on party lists (Merav Michaeli, Zehava Galon, Aida Touma Sliman, Naama Lazimi) constitutes a step forward. Commitment to a gender-sensitive platform across the board is another. But no country that wants to progress in the contemporary world can afford to dispense with the full participation of over 50% of its population and the perspectives and abilities they bring to the public sphere.

Now is the time to act. Placing more women on all party lists is a democratic imperative. Mobilizing more feminists of any gender is a prescription for social justice. Greater gender equality is the precursor of progress towards a fair society for all.