“Please take your baby out of this environment,” I begged.

Rosh Hodesh Sh’vat was a particularly loud one. As a Woman of the Wall, I am quite accustomed to the screaming and yelling that surround us each month as we carry out our prayers for the new month. This month, many of the young boys- children who are routinely encouraged to show up in opposition to WOW- brought whistles to the Kotel. Caught in the chorus of screaming seminary girls and boys with whistles, my ears were ringing.

While being verbally attacked by a group of teen girls, I noticed a woman holding a baby. Before all else, I am a mother. It was unfathomable to me that another mother would bring her baby into such an environment, but here I was witnessing exactly that. This woman was no stranger to me- I’ve seen her for many months, as she and her husband come every Rosh Hodesh to demonstrate against WOW. I began to plead with her to take her baby out of this chaos. I know, as all mothers do, how sensitive young lives are. As a mother of two little girls, one the same age as this baby, I know that they are susceptible to the energies around them- for better or worse.

This agitator did not relent. Hurling hateful insults at us, for the simple crime of praying in a way that does not adhere to the strict norms of the ultra-Orthodox, all I could think of was what this baby would subconsciously take away from this experience.

Right beside me, another Woman of the Wall, Ronit, was having a maternal moment of her own while being accosted by a group of girls her own daughter’s age. “Derech eretz,” she repeated to them as they were pushing and kicking us. “Do you have any other words?” they jeered. “Let’s start with that,” said Ronit.

Anyone who has participated in a Rosh Hodesh service with Women of the Wall can attest to the bitter hatred in the eyes and voices of the children who have been raised to oppose any religious expression that deviates from ultra-Orthodox teaching. This is how they behave in response to WOW praying in the way that we wish. What if, as Ronit pleaded, we started with derech eretz? What if we taught our children to treat everyone, especially those we disagree with, with tolerance and respect? That is the future I fight for when I pray with Women of the Wall. 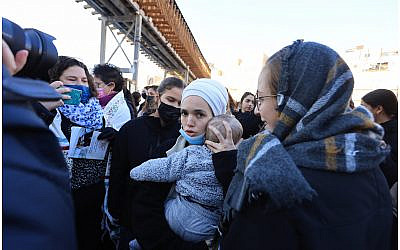