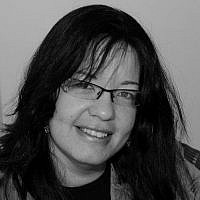 The Blogs
Tania Hammer
Apply for a Blog
Advertisement
Please note that the posts on The Blogs are contributed by third parties. The opinions, facts and any media content in them are presented solely by the authors, and neither The Times of Israel nor its partners assume any responsibility for them. Please contact us in case of abuse. In case of abuse,
Report this post.

Last week during the #metoo campaign which took our world by storm, my friend sent around an X Factor Israel clip.

It was a lovely respite to the heavy, emotional preceding days of reports of the worst sorts of sexual harassment history has known. 17 year old Eden Heleni belted out a Cold Play song that left everyone from the judges to the audience to the people around the world cold with goose bumps. Her pitch, English language (foreign don’t forget) and charisma were outstanding and top of the line. Her ultra orthodox mom was so moved she was crying; I’m quite sure she’s heard her daughter belt out many songs of this calibre and payed for her voice and foreign language lessons. Her pride was touching. Her daughter Eden was on the big stage.

We were introduced to Eden and learned a few things about her. She proudly said she is 17, Ethiopian, lives in Jerusalem and would love to sing a duet with Beyonce.  Eden supports many causes labeled on loads of rubber bangles up and down her arms. She was passionate about these causes; I’m sure she would have said more but contestants only get a couple of minutes. And she’s got absolutely no stage fright whatsoever, she’s funny and loves to sing. And boy, did she sing. She’s a long way from Addis Abbaba!

Usually when people watch these little clips from the privacy of their cell phones, they just click off after the performance but I like to listen to the judges, hear what they have to say. Especially when Simon Cowell speaks. His criticism is meant to be a teaching moment for the performers. His biting words leave people shaking in shame or gratitude. His white undershirt is no match for the severest hairstyles, tattoos and avant garde clothing of some of the other judges. Simon was not on the panel but he endorses every X Factor. Each judge was blown away by this sweetie, at once a typical teenager filled with so much promise and yet, so adult-like as she accepted it all with grace and humor.

And then…the last judge. I don’t even want to know his name. As overwhelmed and encouraging as he was, as all the judges were, promising record labels, fulfilling Eden’s dream of singing with Beyonce, trips abroad to other X Factors, this judge said 2 words that had absolutely no place in a competition of this magnitude. And Israel doesn’t bleep things out. He said in Hebrew, ‘You didn’t sing like a young girl, you belted out like a Mother F******”. I thought I heard wrong, so I listened to it again, and sure enough, even the subtitles blocked it out.

Really X Factor Israel? You hired a judge who summarily cursed our daughter out and sexually harassed her in one fell swoop, while cursing her beautiful mother and all mothers watching the clip? All in the name of encouragement. This is not a compliment yet the audience was going crazy with excitement. And probably the saddest thing was that Eden was in the throes of euphoria and she winked at the judge like he was Simon Cowell himself, but Simon would never let those words slip off his tongue. I don’t care how this judge talks to his wife, mother or 17 year old daughter, but to say that on public TV is demonstrable.

When someone misuses the English language to such a degree, surely there should be repercussions. Yet, because the native language here is Hebrew, does she really understand the ramifications of what just happened? Does this judge realize the magnitude of his power to get people who come on his stage not only to the next level of professionalism but to groom themselves for success? My guess is not. So many times I’ve walked into religious stores here where they are playing rap and the beat is good, but the language is so filthy I’ve told them to switch to another station. Mostly the manager apologizes profusely; he had no idea that the language was foul. I’m glad I bring these things to their attention.

What would I do if I met Eden? Obviously I would compliment her on the performance of her life. Then I would have a few rubber bangles of new causes to sport on her crowded arms.

The fifth would be another #METOO because now “Eden, with all your X Factor publicity, you can be an ambassador for sexual harassment and an agent of change to help the way all women are treated all over the world. Especially in Africa – especially your birthplace, Ethiopia. It’s a really hefty job, and it starts right here, right now with YOU. Perhaps you and Beyonce can work together on this cause that affects us all”.

About the Author
Tania grew up in Sydney, Australia, moved to NY when she was 22 and found herself in Israel for her 50th birthday - an Aliyah dream come true! She works at a gallery in Jerusalem and is a student of life...Tania is an Orthodox woman with a progressive take on Torah. She started a popular Facebook group for Anglo divorcees and widow/ers called SDEI. But her crowning glory is her daughter on whose footsteps she followed to come to Israel.
Comments