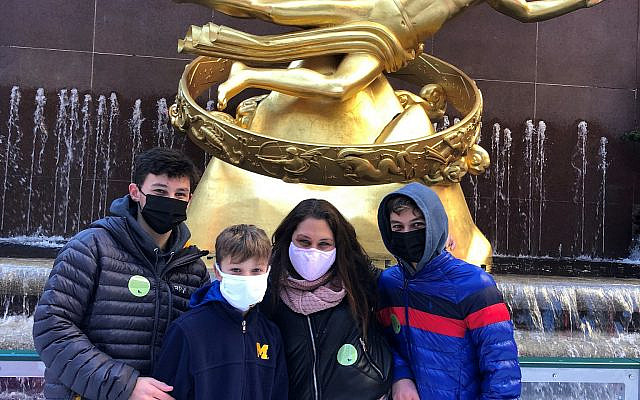 Several summers ago, I stood at the site of the old train station in Berlin in remembrance of the Jewish children placed on Kindertransports out of Germany to Great Britain and France to escape the Nazis. These transports, of which there were far too few in number, gave these lucky children a chance at life. Yet despite knowing you were protecting your child, the decision to place him or her on that train must have been gut wrenching for any parent.

These children (ranging from babies to young teenagers) were separated from their parents and sent by themselves to countries where they did not speak the language, know the customs, have family or friends, and were unfamiliar with their surroundings. Mothers and fathers said their painful goodbyes on train platforms not knowing if they would ever see their daughters and sons again. And in most cases, they did not.

Over the years, I have heard a common theme from survivors: “it was my mother’s courage, bravery, and smarts that saved me.” Virtually all of the children who made it through the war credit their mothers as being integral to their survival. Although that seems to be a constant, what differs is the actual decisions the mothers made on how to save their children. For some, it was placing them on a train to a foreign nation. For others it was sending them into hiding on their own, and/or placing all of their trust in a stranger to save their child. I also know of mothers that hid with their children, in barns and forests throughout the countryside, keeping their wits about them to remain together. And of course, the mothers that arrived in ghettos and camps, even death camps, often went without even their meager food to give more to their children while painstakingly hiding them while they went to work in the fields and factories.

We also know now that these child survivors were so rare, and that 1.5 million Jewish children were murdered in the Holocaust. This staggering number shows how although any mother would do whatever they could to ensure their child’s survival, most of the time it was no match for the Nazi regime.

As I stood in the hot European summer sun that day, I could not begin to fathom how the Jewish parents during the Holocaust, particularly the mothers, had the strength to make the decisions they did. Of course, like any other mother, I had made decisions as a parent that weren’t always easy. This was 2018, and I was blissfully unaware of how my role as a mother would be impacted in the coming years.

In 2019, my family dealt with a personal health crises; forcing myself and my young children into a new reality that we had never had to face. Then, just as we were getting our lives back, the pandemic began, and I was suddenly the mother to three adolescent sons in a world so scarcely different from the one that had known. Like so many of my contemporaries, this was clearly not how I thought things would go, and the endless decision making was exhausting. From the early days of wiping down groceries and debating which takeout foods were safe. To determining when and how we could venture out, who we could see, and what activities were safe. We then had to manage the return to school remotely or hybrid, to maybe, please let it happen, full time. I anguished over every choice, and tried to balance those decisions with the physical and mental health of my children. While dealing the best I could for myself and family,  the societal pressures and judgements of other mothers weighed on me, which in turn weighed on my children and our family dynamic.

As I heard the news this week that vaccines might be approved for children over 12, making two of my three sons eligible, my heart soared with an excitement like none other. Would this bring the end to the agonizing COVID-induced uncertainty and the multiple choices we have to make as a result? I certainly pray it does. But, almost immediately I recognized that the vaccine would surely bring additional choices, and then of course the judgements, as well.  During my town’s last Board of Education meeting, there was already a question about what vaccinated children versus unvaccinated children might be allowed to do in the coming school year, and we still don’t even have FDA approval for children under 16.  I could see the tensions and anxiety rising again.

As my thoughts often do, I turn to what I know from the past. We have never had a crystal ball to tell the future. Parents whose children were in danger of the Nazis could not possibly know if they were making the choice that would lead to their child’s survival. They did the best they could with the knowledge that they had under the absolute worst of circumstances. And the choices were staggeringly different as I have come to know with so many different results. Sadly, more often than not, during the Holocaust, families did not have happy endings. However, this does not mean that they did not think hard about their decisions and chose them with the drive to survive along with their love for their children. They did the best they could also, with the information that they had at the time – exactly what we as mothers, as parents should be doing right now.

Clearly, I do not believe we are coming remotely close to the mortal danger that the Jews of Europe were during the Holocaust. Yet we as parents, as mothers and fathers, do need to navigate pandemic parenting decisions as best we could for our own children, and similar to back then, those choices may be different from the ones that others might make.

Technology has come a long way since the time of the Holocaust but we still do not have a future teller among us. So, we do the best we can to choose what we, as parents feel is right. This Sunday is Mother’s Day here in the United States, and it is the second one living within our new reality. We have come a long way since the last one, and although we know we have so much further to still go, we should all celebrate the choices we have made, even if they weren’t the same as others, and even if they did not always result in the outcome we had hoped for.