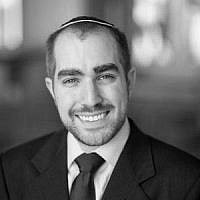 The Blogs
Michael Fel
Apply for a Blog
Advertisement
Please note that the posts on The Blogs are contributed by third parties. The opinions, facts and any media content in them are presented solely by the authors, and neither The Times of Israel nor its partners assume any responsibility for them. Please contact us in case of abuse. In case of abuse,
Report this post.

Wednesday morning minyan at Temple Emunah had the look and feel of a shiva minyan.

The davening (prayers) didn’t have the regular rhythmic cadence;

And some looked unsure of what to say or do.

As people gathered after the morning service, you could hear Elisabeth Kubler-Ross’ different stages of grief echoing around the building:

Denial — I can’t believe this happened?!  It’s not real!  It makes no sense!

Anger — Who are these people who voted that way?!  How could anyone be so wrong?

Some clearly had gone beyond the first stages and had arrived at acceptance.  What does this mean for my future?  What does it mean for our country’s future?

Anger, grief, and mourning typically follow a tremendous loss.  So we must ask ourselves: who and/or what is being mourned?

Some were mourning the perceived death of their idealized vision of the United States:  A country that welcomes diversity, the land of the immigrant, a government that protects the rights of the LGBT community and honors the right to same-sex marriage, a government that protects the reproductive rights of women, and believes that all should have access to healthcare.

Some were mourning the death of political correctness and civil discourse:  Name calling.  Chants of “Lock her up!” “Build the Wall!”  Pundits shouting at each other on television shows.  Throwing protesters out of rallys and inciting violence.  Is this how we engage in debate about the policies and direction of our country?  What happened to disagreeing without being disagreeable?

Some were mourning the death of the prestige of the presidency – How could someone lacking experience in public service hold the highest office in the land? What does this say about the requirements to hold such an office? How could someone who bullies, lies, and ridicules others, serve as a role model to our children?

Finally, some were mourning the death of the term “United States.”  After over nearly 120 million votes were cast, Clinton amassed a statistically slim 200,000 vote lead in the popular vote, while Trump could only claim a minor margin of victory in the electoral college.  It is undeniable that for every passionate voter who agreed with Clinton, there was an equally vocal Trump supporter.

And today, those who agreed with Trump are celebrating.

And today, those who sided with Clinton are in mourning.

So how does one mourn?

Firstly, we allow ourselves time to grieve.  It is okay to take the time to process the feelings, the disappointment, the anger, the fear with friends and family.  Like at a shiva minyan, where the rabbis suggest those making condolence visits listen more than they speak, we too must listen to each other.  It is also helpful to note that the Sages teach that the first three days following a loss are particularly painful.

Secondly, after that intense period of mourning, we must begin the next process, shloshim – a 30-day experience of transitioning from intense grief to being more hopeful.

Finally, as those who mourn a parent, we engage in the process of daily acknowledgment of the new reality.  Just as mourners are asked to say Kaddish, to publicly affirm their connection to the greater community every day, we must, also, daily, redouble our efforts to support the greater community.

So what does one do next?

I concede that this will be a bitter pill to swallow for some – and if you aren’t there yet, I hope you will get there, the way you move forward is to work with others who have the power to further your agenda and be open to working with those with whom you disagree.

Already,  political leadership is setting an example for us.

“To the degree that Mr. Trump is serious about pursuing policies that improve the lives of working families in this country, I and other progressives are prepared to work with him. To the degree that he pursues racist, sexist, xenophobic and anti-environment policies, we will vigorously oppose him.”

“…I still believe in America, and I always will. And if you do, then we must accept this result and then look to the future. Donald Trump is going to be our president. We owe him an open mind and the chance to lead. Our constitutional democracy enshrines the peaceful transfer of power.”

I have often said that I view Jewish Law/halakhah and secular law as the means for creating a more perfect world.  If your more perfect world includes discrimination protections against minorities, then find partners who will fight locally and nationally with you.  If you believe in common sense gun control, then work with whoever you can on that issue.  If you are concerned for the well-being of Muslims, African-Americans and Hispanics, then unite with other advocates.  Working with people with whom you disagree is often challenging because we typically paint them with a broadly offensive brush.

Earlier this week, I was talking to my sixth graders about the election, and one said, “I can’t believe there are 59 million idiots who voted for Trump.”  I corrected him, and said, “There are 59 million people who felt differently than you.  Attributing their vote to them only being uninformed, racist, xenophobic, or something else ugly is a shortcut to being able to dismiss their feelings.  No doubt some of them do, in fact, have those feelings, but most had other legitimate reasons to vote for Trump.  I am willing to bet during the last two election cycles, in classrooms in Texas, Oklahoma, and Utah, people said, I can’t believe those out-of-touch East Coast liberals voted for Obama.”

So we have to work together when we can on what we can.  To strike up conversations and seek out common ground, not in spite of our differences, but because of them.

Regardless of our disagreements with our elected leaders, the Sages made it clear that all of our fates are intertwined.  Rabbi Hanina states in Pirke Avot:  Pray for the integrity/welfare of the government; for if people did not fear it, they would swallow each other alive.

And so I offer a prayer from Siddur Lev Shalem on behalf of our country as we do every Shabbat morning:

Our God and God of our ancestors, with mercy accept our prayer on behalf of our country and its government.  Pour out Your blessings upon this land, upon its inhabitants, upon its leaders, its judges, its officers, and officials, who faithfully devote themselves to the needs of the public.  Help them understand the rules of justice You have decreed, so that peace and security, happiness and freedom, will never depart from our land.

Adonai, God whose spirit is in all creatures, we pray that Your spirit be awakened within all the inhabitants of our land.  Uproot from our hearts hatred and malice, jealousy and strife.  Plant love and companionship, peace and friendship, among the many people and faiths who dwell in our nation.  Grant us the knowledge to judge justly, the wisdom to act with compassion, and the understanding and courage to root out poverty from our land.

May it be Your will that our land be a blessing to all who dwell on earth, and may You cause all peoples to dwell in friendship and freedom.  Speedily fulfill the vision of Your prophets: “Nation shall not lift up sword against nation, neither shall they learn war anymore.”  “For all of them, from the least of them to the greatest, shall know Me.”  And let us say: Amen.

About the Author
Rabbi Michael Mauricio Fel is proud to serve as the Rabbi of Temple Emunah. Originally from Miami, Florida, Rabbi Fel is fluent in Spanish, loves woodworking, and hiking.
Comments