The Blogs
Natan Huberman
The Gateway Observer
Apply for a Blog
Please note that the posts on The Blogs are contributed by third parties. The opinions, facts and any media content in them are presented solely by the authors, and neither The Times of Israel nor its partners assume any responsibility for them. Please contact us in case of abuse. In case of abuse,
Report this post. 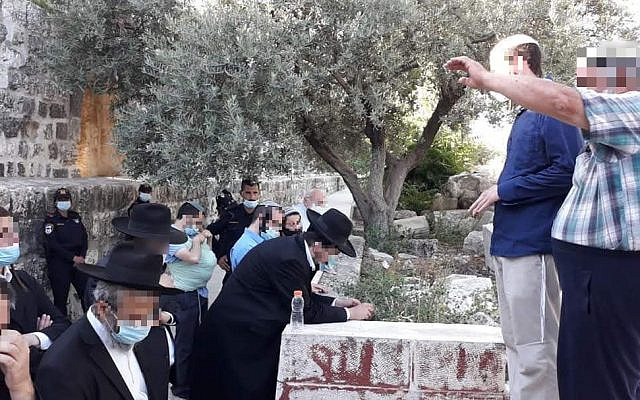 A photo from June 2020 capturing Birkat Cohanim on the Temple Mount, the priestly blessing that was done once in Temple service. I have blurred the faces simply because I have not asked permission from each participant to use their photo in my blog.

The soft summer sun was oh so gentle. It was early morning and our group of about 20 had ascended the Temple Mount for Shacharit. This prayer sequence had originally been designed to parallel the daily service of the Temple order in the morning. And on Mount Moriah space and history converge to add a new dimension of depth to common practice.

Shachar is the Hebrew word for the morning sunrise. Yet it is also the root word for Shocher, to beseech. And it was this peaceful morning that we returned to the source of this prayer’s origin. We arrived at sunrise and went up not long afterwards. And in the sun’s golden hues and underneath the heavenly blues we prayed together where the Temple had once stood.

“But prayer for non-Muslims is illegal on the Temple Mount,” is a common misconception. “It will incite violence.” Well as someone who visits often, I can say that this Shacharit experience happens everyday at its fixed time. Israeli police are aware and Jordanian Waqf members are too. The few who have made it their goal to carry on these prayers on the Temple Mount quietly and respectfully are not seeking recognition or votes. They are seeking religious expression in a respectful manner. In any democratic country that type of expression is guaranteed by law. They truly see the Temple Mount as a “house of prayer for all the nations.”

But despite the unique beauty of an experience like prayer on the Temple Mount, my Jewish upbringing has taught me better. From a young age I have been taught not to seek solely the ‘spiritual experience’ but to seek to ground that experience in real world change. “I have desired lovingkindness, not Olah-sacrifices,” was prophesied by Hosea. His words have echoed throughout Jewish tradition in the importance of justice and love. Jewish sources abound with this teaching in various forms and reincarnations.

They also echo from the remnants of the Temple all over the Temple Mount for those with ears to hear it. Especially up there I cannot ignore the calling.

What I would like to see is this idea spread among Temple Mount activists. I believe these organisations can be used to facilitate help to those in need. In addition to the agenda of activism – in fact,  because of that agenda – we would do well to consider the words of Isaiah this Tisha B’av fast: Is this not the fast I will choose? To undo the fetters of wickedness, to untie the bands of perverseness, and to let free the oppressed, and all perverseness you shall eliminate. Is it not to share your bread with the hungry, and moaning poor you shall bring home; when you see a naked one, you shall clothe him, and from your flesh you shall not hide. (58: 6-7)

But this critique does not stop at activists. The Temple Mount is the national crown and its message their command. It does not belong to the select few who presently visit it. And as such, the onus of fulfilling its mission in our national and religious ethos is on all of us. I hope we can all come closer to grounding these concepts and bringing about true change in the direction of love and justice.

Rabbi Shmuel bar Nachmani stated: Said the Holy One blessed be He to David, ‘David! I will count each of your days as full and not lacking [for not completing the Temple construction]. Is not your son Solomon building the Temple to offer sacrifices in it? Your justice and righteousness that you perform is more desirable to Me.’ And for what reason? [The verse states (Proverbs 21):] ‘Do righteousness and justice. That is more desirable to the Eternal than a sacrifice.’ (Jerusalem Talmud Tr. Brachot 13a)

Once Rabban Yochanan ben Zakai left Jerusalem and Rabbi Yehoshua was walking behind him and they saw the Temple in ruins. Rabbi Yehoshua said, ‘Woe is it to us that this is destroyed – the place where the sins of Israel are atoned for.’ He answered him, ‘My son, do not let this worry you. We have an atonement which is similar. And which is it? It is lovingkindness, as it states (Hoshea 6): I have desired kindness and not an offering.’ (Avot D’Rabbi Natan 4)

There is in its wall [i.e. the wall of the Temple Mount] two exceedingly tall gates with two domes on their external. And their gates are iron and closed forever. The masses call them the Mercy Gates and the Ishmaelites have become accustomed to that and call them Bab a-Rachma. And it would follow that these are the very gates that King Solomon made for kindnesses, one for the newlyweds and one for the mourners and excommunicated. As is recalled in Tractate Sofrim 19: Rabbi Eliezer ben Hyrkanus said, ‘Solomon saw a group that performed kindness and built for Israel two gates – one for newlyweds and one for mourners and the excommunicated. On the Sabbath the residents of Jerusalem would gather and ascend the Temple Mount and sit between these two gates in order to deal kindly with one another.’ And perhaps, in some measure that [is why] they are called the Gates of Mercy. (Rabbi Ashturi HaParchi Kaftor Va’Ferach 6)

About the Author
Natan hails from Toronto, Canada and made full Aliyah in 2014, although he has been making Aliyah to the Temple Mount since 2011. His passion for the Temple Mount began in Yeshivat Har Etzion and continued through his Bachelor's degree, his military service and work in the Israeli defense industry. Currently he is the project manager at Students for the Temple Mount and a guide on the Temple Mount at the Open Gate. He is set to begin medical school this September.
Related Topics
Related Posts
Comments