The Blogs
Alden Solovy
Blessings Abound
Apply for a Blog
Advertisement
Please note that the posts on The Blogs are contributed by third parties. The opinions, facts and any media content in them are presented solely by the authors, and neither The Times of Israel nor its partners assume any responsibility for them. Please contact us in case of abuse. In case of abuse,
Report this post.

“What do you actually do when you meet?” This is the most common question I hear as I travel Israel introducing men (and women) to ManKind Project Israel’s New Warrior Training Adventure. I talk about deep emotional healing, addressing core wounds, and the concepts of integrity and accountability. “But what do you actually do?” folks respond.

Our programs are profoundly experiential, I say. We tap the well of masculine archetypes: Warrior, Lover, Magician, and King, starting by healing our Warrior energy. How? By challenging men to become more accountable. How? By healing themselves and the wounded little boy deep inside. How? By taking on a mission of service.

“But what do you actually do when you meet?” they say, and some add, “you must go into the woods and bang drums and yell, or something.” I smile and say: “We initiate men into mature masculinity. We ask men to look inside themselves. To own their emotions. To challenge themselves by looking at the wounds within. To begin the process of healing.”

“So, you’re not going to tell us.” I say: “We use every technique one might imagine to get a man out of his brain and into his heart, to touch the part of himself he fears most, to envision himself in a new way. Conversation, dyad work, visualization, game playing, silence, and journaling. If it will move a man in direction of healing, we do it.”

Three movies, taken together, answer the question of what we do, and what we don’t do. “The Work” is a documentary about a unique program held at Folsom State Prison open to the public twice yearly. It touches our core work. “Welcome to the Men’s Group” is a parody, offering both a seminar on ‘what not to do’ in men’s work, as well as some insights into challenges men face. “A Monster Calls” shines light on how our cultures teach boys to hide their wounds and what happens when they do. 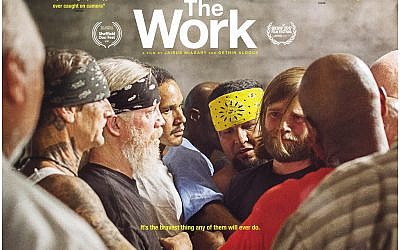 The raw pain of men – rejected by their fathers or humiliated by a society that doesn’t value men’s emotions – is on display in this intense documentary following three civilians on a four-day group therapy retreat with men incarcerated at Folsom State Prison. (Click for the trailer.)

The convicts meet weekly for intensive group therapy. Twice a year, they invite members of the public to join them. The movie follows Charles, a bartender and father of three; Chris, a twenty-something museum associate; and Brian, a teacher’s assistant. All three of them are hesitant at first, to different degrees, and all eventually reveal their pain and trauma. By observing the inmates doing their own work, these men finally open themselves up.

“The Work” illustrates the power of healing that comes when men hold each other to honest communication, dropping their masks and games. Touched by the deep emotion of the men in the documentary, some men seeing the movie for the first time will cry along with heartbreaks and triumphs revealed in the film. (Review by Alden Solovy) 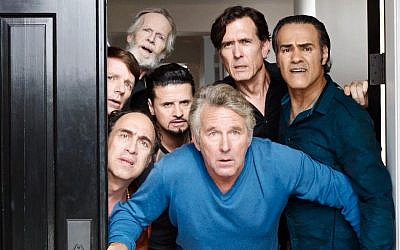 “Welcome to the Men’s Group” is Hollywood’s most overt attempt at introducing mainstream movie-goers to the men’s self-help movement. (Click for the trailer.)

The film opens with a varied mix of middle-aged men arriving at one of the group member’s homes. After the men enjoy a pre-meeting meal together, they form a circle and start to “check-in.” We see the men share their struggles, and slowly peel away various layers of resistance until the reality they face comes pouring out. But the men talk over one another and offer unsolicited advice at the same time, and the meeting quickly unravels. That unraveling is punctuated by the group’s composed, charismatic leader – a recovering sex addict – who by the end of the film painfully admits to having had a relapse with one of the other members’ daughters.

At a little more than two hours long, “Welcome to the Men’s Group” is indulgent, uneven, and at times, meandering. But behind the drama and trailer-worthy hijinks, there are a few things the film gets right. Namely, the ubiquitous nature of the masks that most men wear, and the transformation that can occur when men create intentional space together. (Review by Noah Pedrini) 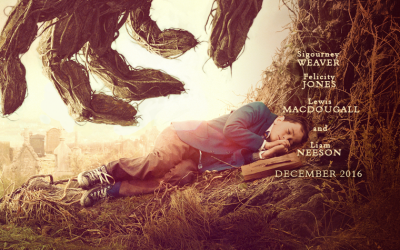 “A Monster Calls” is a dark fantasy film based on a young adult novel by the same name written by Patrick Ness, based on an original idea by Siobhan Dowd, who was dying of cancer at the time. (Click for the trailer.)

Connor O’Malley is a 12-year-old boy with a lot on his hands. His mother is dying of cancer, he is bullied at school, his father prefers his new family overseas to him, and he is forced to move in with his cold and demanding grandmother, played by Sigourney Weaver.

But then, a visitor comes calling: every night, at 7 past midnight, a giant monstrous Yew tree – voiced by Liam Neeson – comes alive to meet him, and guide him on his journey, in unpredictable ways and destination. Even the eponymous monster might not be who we think it is. The monster tells Connor three fables, three fables within this beautifully constructed movie-fable and touching coming-of-age story, with a deeper message about the demons we all fight. (Review by Dvir Falik)

So, what do we do at an NWTA?
Each of these films provides a different take on The Hero’s Journey, a myth-based framework of three parts: separation, where the hero sets out on his journey, seeking (possibly reluctantly) adventure; initiation, where most of the physical and internal journey happens; and return as a new man. Each of these films – in its own way – reminds us that we are the authors of our own lives.

This November, 50 men from around the world will meet at an ecological farm in the center of Israel to ‘do our work.’ What work? The work of healing. The work of becoming our best selves. The work of becoming the best fathers, brothers, sons, husbands, grandfathers, and friends we can. To go on – or to continue on – our own Hero’s Journey.

Men aged 19 to 70 will gather again as ManKind Project Israel for our third New Warrior Training Adventure (NWTA). We call the experience a further initiation into our own manhood. Our next NWTA will be November 15-17 at an organic farm near Tzomet Ramlod. Are you the next man in? Don’t just ask about what we do. Do it. We can be reached at mkp.israel@gmail.com.

About the Author
Alden Solovy is the Liturgist-in-Residence at the Pardes Institute of Jewish Studies in Jerusalem. A liturgist, poet, and educator, his teaching spans from Jerusalem to the UK to synagogues throughout North America. He's the author of five books of modern t'fillot, having written hundreds of pieces of new liturgy. His latest book, "This Precious Life: Encountering the Divine with Poetry and Prayer," is the final installment in his 'Grateful, Joyous, Precious' trilogy. His work is anthologized in more than 20 volumes of prayers and meditations. Alden made aliyah in 2012. He is the founder of ManKind Project Israel. Read his work at www.ToBendLight.com.