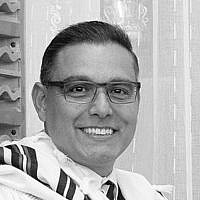 The Blogs
Carnie Shalom Rose
Apply for a Blog
Please note that the posts on The Blogs are contributed by third parties. The opinions, facts and any media content in them are presented solely by the authors, and neither The Times of Israel nor its partners assume any responsibility for them. Please contact us in case of abuse. In case of abuse,
Report this post.

Moving from the Particular to the Universal: The Highest Calling for the Jewish People?

This Shabbat, we find ourselves celebrating the 7th Day of the Festival of Pesach and preparing for this week’s special reading of the account of Kriat Yam Suf, the crossing of the Sea of Reeds, which tradition posits took place on this day. And yet, though we are knee-deep in our Passover celebrations, I find myself thinking back to the joy-filled holiday of Purim that we enjoyed just a few weeks back and to one of its primary heroes, Mordechai.

Now of course you are asking yourselves, why? What might Mordechai have to do with the Exodus and in particular with the miracle of the deliverance at the Sea? According to Rabbinic tradition, Mordechai was a prophet and a member of the famed Jewish legal body known as the Sanhedrin which gathered in the Chamber of Hewn Stones, and whose members were so well-educated and worldly, that they knew all of the seventy languages extant at that time. In this respected capacity, Mordechai helped adjudicate difficult legal matters, and owing to his expertise as an accomplished linguist, he was able to uncover the sinister plot to assassinate King Achashverosh found in the heart of the Purim tale. For this act of bravery and patriotism, Mordechai was ultimately commended by Achashverosh and chosen for a position of power and prominence in the court of the Persian monarch.

However, there is one more little-known and intriguing tidbit about the life Mordechai that deserves our consideration.  According to the Talmud (BT Megillah16b), once Mordechai was elevated to serve as Viceroy in Achashverosh’s government, many of his Rabbinic colleagues determined that his involvement with civic affairs and, in particular, his focus away from the exclusive needs of his fellow Jews and Torah study, made him no longer a viable candidate for serving on the most elevated of Jewish legal bodies. Mordechai’s abiding concern for “gentiles and pagans” sullied his heretofore stellar reputation and many of his coreligionists therefore turned their backs on him and some even called for his removal from the Sanhedrin.

This Talmudic passage gnawed at me as I prepared to reread the tale of the deliverance of our people at the Red Sea; the Biblical account that we recall and recount today, the 7th day of Passover. As you may remember, the Midrash posits that as the Israelites celebrated their victory over the Egyptians who had been swallowed up by the waters of the Sea of Reeds, a heavenly voice called out: “My creations, my children, the work of My hands, are drowning and you are making merry and singing songs of salvation?!” (BT Megillah 10b)

Passover is indeed a holiday of liberation. And yes, it is unabashedly the story of OUR (Jewish) deliverance. And yet, it would seem to me that as a people chosen by the Creator to serve as an “Or Goyim – a light unto the nations” (Isiah 42:6), our liberation and deliverance are incomplete until we do what we can to secure the release and emancipation of all those mired in servitude and oppression. And, in order to do this, we must reject the criticisms and chastisements of those who see our goal as myopically focused exclusively on Jewish survival and flourishing.  This reorientation demands that we, like the hero of the Purim saga Mordechai, engage in the needs of the communities that reside beyond the limited boundaries of our own parochial needs. Not, heaven forbid, because we yearn to abandon our Jewish Tradition or neglect our responsibilities to our own people, but rather because we want to live-out the deepest and most profound manifestation of what our Holy Torah comes to teach us.

This Passover, as we retell the powerful story of our own people’s freedom from the oppression of tyrants, let us pledge to also help hasten the arrival of the time we allude to thrice daily in our Aleynu prayer by actively working “Letaken Olam BeMalchut Shaddai; Perfecting the entire world so that all of the earth’s inhabitants can experience and appreciate the awesome power and unequalled beauty of the Almighty”.

May this era soon arrive – speedily and in our day, Amen!