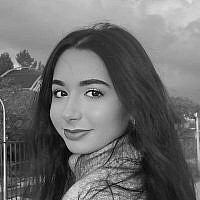 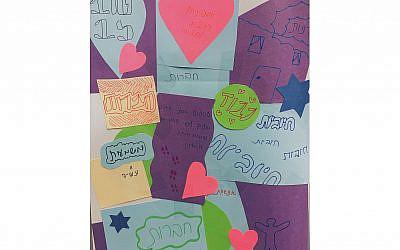 “Forty-five minutes,” my commander informed me in Hebrew, gesturing that I should begin. Fumbling through my bag and my words, I handed out to each of the dozen or so candidates for officers’ course in my group the slips of colored paper I’d cut out during sleeping hours the night before, instructing each of them to write down the most important value or trait to them and decorate the paper however they could in just a few minutes. The project was far too rushed, because even irrespective of the time allotment, I was admittedly afraid I’d forget my entire Hebrew vocabulary before I’d manage to get my point across. At first, I played it relatively safe, opening up a discussion as to what the significance was of everyone picking a meaningful concept and personalizing its presentation. Somehow, through the combined terrors of giving over a class for the first time, being tested in a public setting, and most of all addressing a native Hebrew-speaking audience in my just barely budding fluency, I eventually steered the conversation in the desired direction.

Pulling out a large off-white paper that I’d carved several identical small square holes into, I inquired as to whether it could be reasonably demanded that all of their papers be incorporated into the frame. Several soldiers suggested cutting their papers into squares, sizing them down, removing certain appliqués, as only two had papers that met the requirements. When I asked whether it seemed fair to force anyone to remove or alter parts of their paper, I was met with mixed reactions. I then pointed out that even were they to trim their papers, the colors would still not match. That brought up speculations as to why the frame can only be completed under conditions that offer such limited accommodation.

If the frame is the IDF, I posited, it’s vital that there be a frame to uphold the system. There has to be a common denominator — in our case, Zionism in whichever form — and some collective goal — in our case, national security. Sizing down or folding back some aspects of individuality in order to maintain the integrity of the framework that holds us together so that we can cooperate efficiently may be an appropriate ask, while other expectations that could cut away at the core of a person’s identity or involve a total change in perspective might not be reasonable or even possible. When we instead imagine the frame as society as a whole, I reminded them that every culture and even subculture has its own frame, and that in reality, no individual fills their slot in exactly the manner that has been laid out. Transferring a piece from one frame to the other, which is essentially what we do when we place the societal expectations and customs we are familiar with on others from different backgrounds, can lead to a lot of confusion and isolation if not properly acknowledged and handled. Briefly, I touched on my own experiences of how drastically different my outlook on life is from most of theirs, as an Olah and being Torah-observant, and also asserted that they’re likely to find upon any probing that no individuals think exactly the same way, and that not all people of a given category share a similar background or mentality- even in the secular world.

Once the questions and comments segment started, one of the soldiers asked what I’d recommend he’d do in a scenario where he would become a commander of a soldier who belongs to a minority community. Firstly, I answered after a moment’s pause, take the time to understand that you don’t understand. To appreciate the gap and try to recognize the existing or potential struggles the soldier may face. Give room to the soldier for open discussion of the practical repercussions s/he faces, see how you can help alleviate the alienation or assist in enabling cultural comfortability when possible.

I related stories of the first officer that I remember formally interacting with, the only one whose name stuck with me: Eyal. It was the first week of an initial basic training that would last for less than a month, in the desert during an August heat wave. He was the company commander (in other words- the commander of my commander’s commander), yet he took the time to meet with me and ask me about myself, my background, and how he could help, and to hear out my responses in English. At the time, I didn’t know that in basic training I had to salute to my officers if I made eye contact while passing by, but when I waved to him, he’d cheerfully wave back. On the days that he joined everyone in the cafeteria, he would check that I got my packaged mehadrin meals on time. When it became apparent the second Friday night that the kitchen had forgotten to restock them for Shabbos, and I was yelled at by a commander from another company for entering the kitchen under my platoon commander’s directions, he personally accompanied me to help me find food I could eat and made sure my platoon waited for me for Kiddush. These little kindnesses have stayed with me ever since, in every subsequent stage of the army.

Collecting all the colorful slips of paper in all their various shapes, bearing their own words and decorations, I laid them on the floor in the middle of the room. It was a haphazard arrangement of circles and squares, hearts, and other cutouts. But we all agreed that it looked much prettier than a bland, rectangular piece of paper.

My commander beamed at me as I wrapped up, and addressed the group with a smile. After remarks on how incredible the army is at integrating Olim, in reference to my having given the presentation in Hebrew, her expression sobered save for the ever-present twinkle in her eye. “This topic is so important,” she began, and enthusiastically delved into the issues at hand. At one point, she shared a piece of wisdom that I have to paraphrase: “The IDF used to be the classic example of the ‘melting pot’. Diverse groups becoming one, at the expense of their diversity. Ideally, everyone came out the same. Now this is not so- the IDF is a mosaic. Each individual contributing colors and unique textures and shapes, coming together to form one pattern.”

For me, this was somewhat surprising to hear. The army had seemed much like a melting pot. I’d felt the heat. If I look back a decade or two, though, the flame has most certainly been lowered. Maybe this is the transition; maybe the beauty of the individual stones have begun to be noted enough to be built up piece by piece into a wall instead of churned into a concrete one. As a default, the latter requires less effort, but the former is worth the extra mile. Perhaps the new “New Jew” is the free Jew, free not only of the tethers of foreign subjugation but also of domestic conformity to a single ideal phenotype. After all, the “Old Jew” and “New Jew” were a fallacious dichotomy all along- albeit arguably to an extent necessitated by the circumstances of the time.

“By the way, is this Eyal?” my commander asked me on the way out of the fluorescent-lit classroom, holding up her phone to show me a WhatsApp profile picture. It was. “He has a heart of gold, he’s such a special person,” she gushed to me, “if you would write to him about his impact it would mean so much to him.” I responded that I would one day.

After collecting the scattered papers I’d hastily thrown together, I hesitated briefly before slipping them into my bag. Eventually, I taped them into a collage. I kept it as a colorful, messy reminder that we’ve outgrown the melting pot.