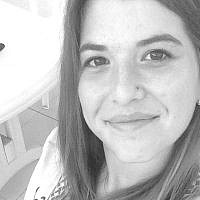 The Blogs
Mali Bires
Apply for a Blog
Please note that the posts on The Blogs are contributed by third parties. The opinions, facts and any media content in them are presented solely by the authors, and neither The Times of Israel nor its partners assume any responsibility for them. Please contact us in case of abuse. In case of abuse,
Report this post.

When I talk about my experiences in Israel, the first thing I mention is the constant invitations: the Shabbat dinner calendars that fill up months in an advance with invitations from people I barely know; the weddings to someone’s “it’s my cousin’s, I think;” the brit milah of my manicurist’s neighbor’s son; or the Shabbat dinner from the woman who took me home with her from the grocery store on Friday afternoon. This is Israel: the land of inescapable hospitality.

I am not quite sure how I ended up here in Israel, after making Aliyah last month with Nefesh B’Nefesh. My family of origin sang Bob Dylan at the Passover seder. They were even somewhat ‘anti-Zionists’ who never considered Israel to be the Jewish home.

But like many young Jews attracted by the prospect of a free trip to Israel, I jumped at the opportunity to go on a Birthright trip in March 2017. I felt a calling to the land and to the people, and started making plans to return. I had four months left of college at DePaul University, and by May I had been accepted into a Masa Israel Journey program to teach English in Bat Yam starting that September.

On Sept. 4, 2017, I was back in Israel and it felt like home. I only knew two words in Hebrew, shalom and fedicha (it means something like an embarrassing moment, and is still my favorite word). Still, somehow, I knew I was right where I needed to be, in a four bedroom-two bathroom apartment with six roommates in the Land of Milk and Honey. I call this period in Israel my Aliyah-lite: I was living in Israel, but I had Masa to give me a soft landing. I went to work four days a week, my apartment was paid for, and I received a monthly stipend.

After about a whole 24 hours in Israel, I had decided on Aliyah and had contacted Nefesh B’Nefesh to help facilitate the process. Gila, my incredible Aliyah advisor, if you’re reading this, thank you for bearing with me every time I changed my mind about what I wanted to do…and it was a lot of times. You have answered every single question, every single time I have asked one.

I still really was not sure how I was going to figure out life in Israel. I studied education, but I didn’t want to teach. Maybe I could spin my skill set and find a job in tech. I got into graduate school in Herzliya, but that didn’t seem quite like “it” either. The army kept calling me back. So I made the decision that I would go serve in the Israel Defense Forces, because if I want to live here and say I am Israeli, I should not be exempt from what everyone else is obligated to do.

I look forward to serving our country and our people in whatever capacity they ask me to, hopefully as a dover tzahal (IDF spokesperson). While I await my time in the IDF, I’ll be studying Hebrew and working at Kibbutz Ma’agan Michael, carrying on the tradition for so many Olim of having kibbutzim as their first residences in Israel. I’m coming home.

About the Author
Molly Bires, a native of Chicago, made Aliyah as part of the Nefesh B’Nefesh charter Aliyah flight on July 24, 2018. Since its founding in 2002, Nefesh B’Nefesh, in cooperation with Israel’s Ministry of Aliyah and Integration, The Jewish Agency for Israel, Keren Kayemeth Le’Israel and JNF-USA, has facilitated the Aliyah of over 57,000 North Americans to Israel.
Comments