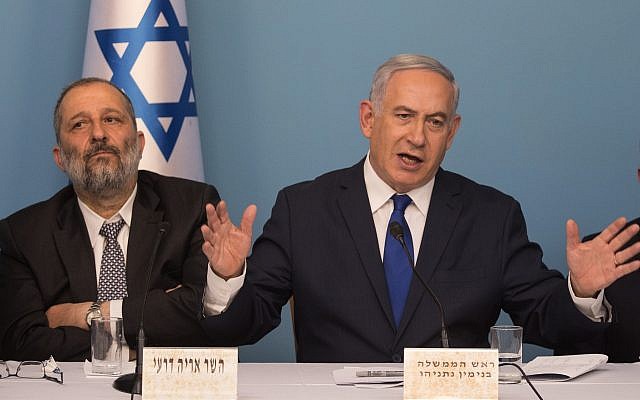 It’s not easy to be both proud and ashamed at the same time. As a politician, it is particularly difficult, as protecting yourself from constant criticism is a prerequisite of the job.

As prime minister, you have much to be proud of, both personally and nationally. You have navigated our country through perilous times and circumstances. As we approach our 70th birthday, we do so with confidence and joy, for Israel is strong and secure, prosperous and successful. The source of your political success and longevity is that so many Israelis feel indebted to you and feel secure because of your leadership.

However, together with your well-deserved pride, you should also feel a measure of shame. It seems like a lifetime, but it was less than a week ago, that you forged a new low. Instead of embracing the moral high ground on the issue of the African refugees in Israel and following through on what was your negotiated agreement with the United Nations, you chose the path of moral obtuseness, while making sure to lay the blame on others. Such actions, although common in our world, are not worthy of Israel and the Jewish people.

Your morally bankrupt rhetoric, branding all asylum seekers as “infiltrators,” instead of allowing that, at the very least, some are refugees, and supporting the false claims that they pose a danger to the Jewishness of Israel and the well-being of southern Tel Aviv, caught up with you. Or more correctly, infected us all.

When you propagate fear and hatred of so many different “others,” and employ fake enemies to encourage phony nationalist sentiments, it is indeed difficult to turn around and admit that the strong and vibrant Israel you helped to produce has nothing to fear from 16,000, 26,000, or even 36,000 refugees. It is difficult, even during Pesach last week, to speak of our people’s responsibility to remember that we were slaves in the land of Egypt.

Fear and hatred are cancerous, and once introduced into the national discourse, have a destructive life of their own. While you have mastered their political use, as we saw last week, they have become your masters.

For the sake of a short-term high as the proclaimed “protector of Israel,” “lover of Jews,” and “the one who cares about the disadvantaged neighborhoods,” you were willing to throw the lives of tens of thousands of human beings into chaos and turmoil and yet again divide the Jewish people. You know that the Supreme Court will challenge any policy of forced expulsion, further weakening it, and will also lead to extensive divisiveness, both within Israel and among the Jewish people.

Tomorrow’s problems, however, are not allowed by you to outweigh a bump in the polls, today. This is doubly true, when tomorrow you, or your coalition partners, can transform the Supreme Court itself into the enemy du jour of Israel and Zionism, and blame all of poor Government of Israel’s problems on all-powerful foreign conspirators, such as the New Israel Fund.

The Bibi of just a few years ago would be ashamed. It was you who in your previous terms served as the ultimate protector of the Supreme Court, the rule of law, and the unity of the Jewish people. In the past, these were values that you held as central to Israel. Today, outside of national security and preserving your coalition, it is difficult to identify anything that you hold as holy.

When you withdrew your support for your resolution, you knew that Friday was but a few days away, and that you could count on Hamas and Gaza to change the focus of our national discourse. You knew that the next car-ramming in Europe or gas attack on innocent civilians in Syria were but a few news cycles away. Who could reasonably criticize you for deporting a few Africans, when our country and soldiers are facing a new threat from Gaza? Who can criticize you as morally wanting, when such moral depravity surrounds us? Only an anti-Semite or an anti-Zionist, of course.

As Israelis we live in a macabre reality. Together with our well-deserved sense of strength, prosperity, and success, we know that danger and instability constantly threaten us. Be it Hamas in Gaza, Hezbollah in Lebanon, Iranians in Syria, or lone wolf Palestinian terrorists, we live with the ever-present sense that somebody wants to kill us. Someone sees our destruction as their principal mission. I don’t know of any other Western democracy whose citizens have to live with this consciousness, daily. Most Israelis trust you, Mr. Prime Minister, above all others, to help navigate us through this treacherous reality. In truth, much of that trust has been earned and well-deserved.

Israel, however, does not merely have to learn how to survive in the Middle East, but also survive the Middle East itself. Remaining a liberal democracy and a Jewish and democratic state and upholding our commitments to human rights and the Jewish values of peace, justice, freedom, and equality, as outlined in Israel’s Declaration of Independence, is a challenging task in today’s Middle East. It is difficult to achieve and even more difficult to continue to care. However, after survival, doing precisely that is Israel’s greatest challenge and responsibility.

Israel needs a leader and not merely a politician. A leader provides vision and challenges the people to expend resources for the sake of their values. A leader inspires sacrifice for a greater cause. A leader also experiences shame when they fail in their responsibilities.

There are voices in Israel and in the Jewish world who, after your debacle last week, expressed shame in Israel. I am not ashamed of Israel. Israel and Zionism transcend our political leaders and are not defined even by the current will of the majority. Israel embodies the mission to build a safe and secure homeland for the Jewish people which is committed to the noblest of Jewish, moral, and democratic principles. I am not ashamed of Israel, because we are in the middle of Zionism’s journey, a journey undertaken under the most challenging of circumstances.

About the Author
Rabbi Dr. Donniel Hartman is the president of the Shalom Hartman Institute and the author of 'Putting God Second: How to Save Religion' from Itself. Together with Yossi Klein Halevi and Elana Stein Hain, he co-hosts the 'For Heaven’s Sake' podcast. Donniel is the founder of some of the most extensive education, training and enrichment programs for scholars, educators, rabbis, and religious and lay leaders in Israel and North America. He is a prominent essayist, blogger and lecturer on issues of Israeli politics, policy, Judaism, and the Jewish community. He has a PhD in Jewish philosophy from Hebrew University, an MA in political philosophy from New York University, an MA in religion from Temple University, and rabbinic ordination from the Shalom Hartman Institute.
Comments