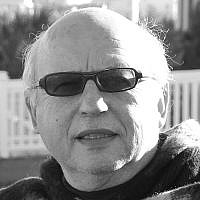 The Blogs
Louis Nayman
Apply for a Blog
Advertisement
Please note that the posts on The Blogs are contributed by third parties. The opinions, facts and any media content in them are presented solely by the authors, and neither The Times of Israel nor its partners assume any responsibility for them. Please contact us in case of abuse. In case of abuse,
Report this post.

I spent the better part of a day recently exchanging online missives with Chicago-based pro-Hamas hate-site host and internet troll Ali Abunimah, co-founder of the notorious Jew-hating electronic intifada. What started out as an offhand spontaneous comment on a Twitter feed about the recent J Street conference soon devolved into a digital war unconstrained by Marquess de Queensberry rules, let alone the Geneva Conventions.

During the course of several hours, I was blocked – then (after I posted a screen shot illustrating my excommunication) unblocked – from Abunimah’s hate-site, became the subject of an in-depth Google background search, had my salary (obtained from a rightwing union-busting website) posted online, became the target of a public campaign to get me fired from a job I never had and a place where I’m not employed (an ironic tactic given Abunimah’s self-styled pro-labor free-speech defense of racist blogger and no-longer professor Steven Salaita), and for good measure was smeared as a bigot and “Muslim hater.”

As serious influence goes, Abunimah is pretty small potatoes. What elevates him a step or two above the archetypal basement troglodyte is the fact that his hate-sites attract somewhere north of 59,000 Twitter followers, including a small amen chorus of ditto-heads whose job is to repost blindly on social media whatever hatches from the mother ship. Being on the receiving end of what looks like an explosion of coarse and hateful invective – even if it only involves 25 people you don’t know – can be very intimidating, which is precisely the point. The aim is to discredit and shame you into silence.

In some sense trying to take on these provocateurs is very much like trying to beat the house in Las Vegas – trolls have pockets of resources and perseverance far deeper than any amateur for engaging in digital warfare. That includes the ability and time to wear you down first.

But if you simply can’t resist the urge to jump into the fray, here are eight pointers you might want to keep in mind before pressing send.

After spending the better part of a Sunday lowering into the muck, my takeaway is that wrestling with pigs is only mildly satisfying but entirely unproductive. You’re not going to change any minds, enlist new converts, show up your opponents for the racists they are, or change the course of history a single iota. Nor are you going to “win.” The momentary thrill of landing a clean rhetorical upper cut to the chin fades pretty quickly once it appears on the screen, then it’s not long before you’re hit with the realization that skirmishing online with a passel of vindictive nobodies has just been an enormous and unfulfilling waste of time.

As research for this post, I took the plunge so you wouldn’t have to. In that regard I was determined to outlast my Hamas troll and succeeded, but I’m not certain to what end. These guys and their ditto-heads can’t be shamed, convinced, or nudged into conducting civil discourse, let alone won over. And no matter how acerbic your wit, accurate your facts, or incisive your logic, there’s no winning, with the only result more grist for the hate mill.  And as the news cycle spins trolls move onto the next manufactured controversy and the whole sordid cycle starts again with a  new target to attack.

So reap the benefit of my research on your behalf and steer clear of the muck. Irrespective of the provocation or impulse to jump in, better to spend your time in the company of people you respect and leave the barnyard to the pigs.

Note: For a blow-by-blow look at how I fared, including what to avoid, search Twitter for @LNayman or #AliAbunimah. It’s not very pretty.

About the Author
Louis Nayman, a labor union organizer for more than 30 years, has conducted education and training programs for trade unionists in Poland, Russia, Romania, Palestine and Lebanon. His writing has appeared in Tablet Magazine and In These Times.
Comments