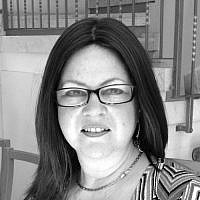 The Blogs
Barbara Solomon Brown
Apply for a Blog
Advertisement
Please note that the posts on The Blogs are contributed by third parties. The opinions, facts and any media content in them are presented solely by the authors, and neither The Times of Israel nor its partners assume any responsibility for them. Please contact us in case of abuse. In case of abuse,
Report this post.

Haredim killing gay people. National religious Jewish Zionists killing Arabs. Makes you angry at the Haredim? Makes you feel guilty and/or ashamed for being Israeli and/or Jewish? Stop it! But do something!

We all should be angry at the guy who stabbed people for being gay. We should all be angry at the people who set fire to the house, killing and maiming Arab members of a family. We should not blame “the Haredim” or religious people, Jews or Zionists. “They” didn’t do this heinous act. We should expect the Haredi press, rabbis and leaders to condemn this (Kikar Shabbat already did condemn it) and make clear to their communities that they are “not God” and have no right to do such horrific zealous acts of wanton murder. WE as a nation — not as individuals from different sectors of Israeli society — should all condemn these actions.

If it turns out those who set the Arab home on fire were “National Religious Jews” and you are either; National Religious, Jewish, Zionist, Israeli, etc… Do not feel guilty or ashamed to be who you are. Do be mad at those people who stir the fires of hatred, who give you a bad name, who are murderers. But don’t allow others to blame you for these horrific immoral illegal kinds of acts. Normative national religious Jews, Jews, Zionist, etc… abhor and condemn such acts.

What can you do other than beating your breast, denouncing “your own” (i.e., I am ashamed to be Israeli today, or Jewish, or Zionist, or Dati Leumi — National Religious Zionist) or Haredi — unless you support or did the actions yourselves.

What can you do? Well, I for one, me, a national religious politically right wing Jew, give out water to the Arab workers waiting outside in the heat here in Beit Shemesh — and by the way, I buy the water from the Chassidishe Haredi store on the way to where the workers are — the Haredim seeing a clearly short-sleeved, hair-sticking-out from-her-hair-covering, national religious Zionist Jew speaking with them about Ahavat Yisrael and the need to help other Jews — Yiddish yet…

Do things that show you do not support baseless hatred against others — and would, as a Jew, as a Zionist, as a Haredi Jew, etc… act in the “Jewish Way” as we are supposed to be: “Ahm Shel Rachmanim” — a nation of compassionate people. We don’t murder or terrorize those whom we are at odds with. War is an entirely other sad thing not being discussed in this blog. Bestow acts of kindness and warmth to all that you meet — corny as it may sound — you will be surprised at the response you will get from those who fully expected you to be part of the “enemy”, or be part of the Jews who are not “Jewish enough”. Both the Arabs who receive the water and the Haredim (and Chassidim) with whom I speak in Yiddish about having a “Yiddishe heartz” (kind Jewish heart) looked surprised but happy.

Call me corny, call me self righteous — I don’t care — but try to “do as I do” and you will be changing things not just incurring hatred

About the Author
Barbara Solomon Brown is a Geriatric Social Worker,a Child of Holocaust Survivors, and is a Canadian who made Aliyah with her husband and family in 1996. She lives in her beloved Beit Shemesh. She continues to be a Social and Political Activist on things related to Israel and the Jewish People. She runs Aliyah121 specializing in the Elderly & Aliyah. Motto: Acts of Kindness Build the World.
Comments