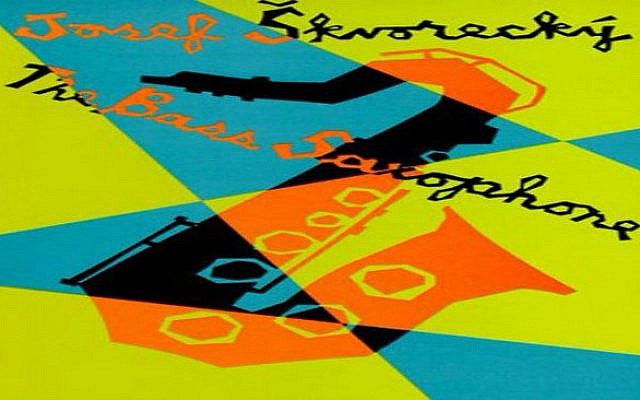 When I was 8 years old, the school band director came to our classroom and passed out a colorful form. He asked us to choose any instrument we wanted. I felt like a kid in a candy shop. Most kids chose flute, clarinet, trumpet or drums, but I intuitively went to the saxophone and checked it off. The director said unfortunately I was too small to play the saxophone and suggested the clarinet. I argued, but to no avail. After a year of my obstinance, the director and my parents finally acquiesced to the saxophone. Why did I have such a passion for the instrument? Perhaps I saw it featured in a film.  Perhaps there were saxophones playing in the pop music at the time. Little did I know that my first intuitive choice would change the entire course of my life. The saxophone had the weight of a strange history behind it; it was also a mongrel instrument, neither 100% brass or 100% wind. What was not known to me, certainly not at my young age, was that I had chosen an instrument full of myths, heroism, and prejudices.  I would also bear the consequences. 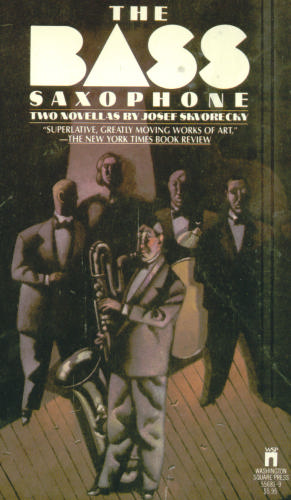 In his book The Bass Saxophone Czech author Josef Skvorecky does a remarkable job describing musical life during the war in Nazi Germany.  There were many restrictions regarding music: what was played, how it was to be played, the rhythms allowed, the speed allowed, and of particular prominence the clear strictures of WHAT instruments were preferred. The following rules were quoted from the Nazi protocol (bold type is this author’s)

In the mid-1980s when I first read the above lines, though all ten of the phrases shocked me, it was No. 10 which hit me in the gut.  How could ONE instrument, the saxophone, be singled out among the rest?  Why was this instrument deemed so dangerous that it had to be outlawed? I then found the now famous poster depicting a Black musician wearing a Jewish star and playing the saxophone. The poster’s message was crystal clear. So HOW did this instrument take on such epic proportions?  What were the Nazis so afraid of? 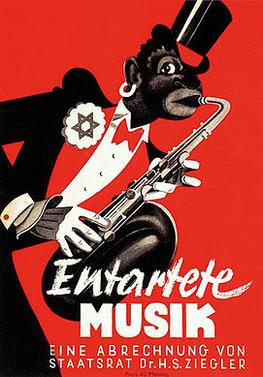 A bit of history. In the early 1840’s when Belgium inventor Antoine-Joseph “Adolphe” Sax invented the saxophone, he was searching for an instrument that could project outdoors (like pure brass instruments do) but would also have a rounder lyrical reed quality.  This was perfect for bands. Later, during the first decades of the 20th century, the saxophone also became popular among jazz players and slowly became one of the primary instruments of Black American music.  Because of its construction, the saxophone lent itself to expressive personalized sounds and mannerisms; it could be whatever the player wanted it to be!  Hence the saxophone was the ideal vehicle for personalized expression, precisely because of the instrument’s innate flexibility and malleability. It was the instrument’s very capacity for individualism which posed a threat to the Germans.

By the 1930’s, when the Nazis came to power, the saxophone had become the “violin” of jazz music (spearheaded by Black American innovations); it ran contrary to how the Nazis desired their music to be; it was expressive, personal, gutsy and individualistic — and hence, an extreme danger to what the totalitarian dictatorship needed: full and utter surrender of one’s individuality, for the benefit of the common good. It was also the Black American musician’s instrument and considered by the Nazis as impure.

At the same time all this was happening, in the United States, many music critics were denigrating jazz music; many found the music dangerous to young ears and bodies.  They found the music licentious and in their minds it conjured up fears that young people might abandon all reason in their pursuit of passion. This also “translated” into fear of relationships between White and Black youth, an absolute red line. These subliminal fears actually had their roots in slavery, when African drumming would send signals from plantation to plantation; it was a form of secret communication. In this way slave rebellions could easily be started.  Hence, the music became to source of fear among white plantation owners.

Later, this fear moved from the drums to the saxophone, and with jazz music in general; the music possessed raw emotions, sense of abandon, and to many white people (both South AND North) a danger to white male dominance, and the unleashing of unchecked human (or animal-like) emotions. This was prevalent in many of the terminology used by music critics of the time; Paul Rosenfeld was one of them. Rosenfeld wrote music criticism for  The New Republic, Seven Arts, Vanity Fair magazine, The Nation, The Dial and Modern Music.  He was highly respected among the musical elite, musicologists and audiences.  In his book An Hour with American Music (published in 1929), Rosenfeld wrote the following: 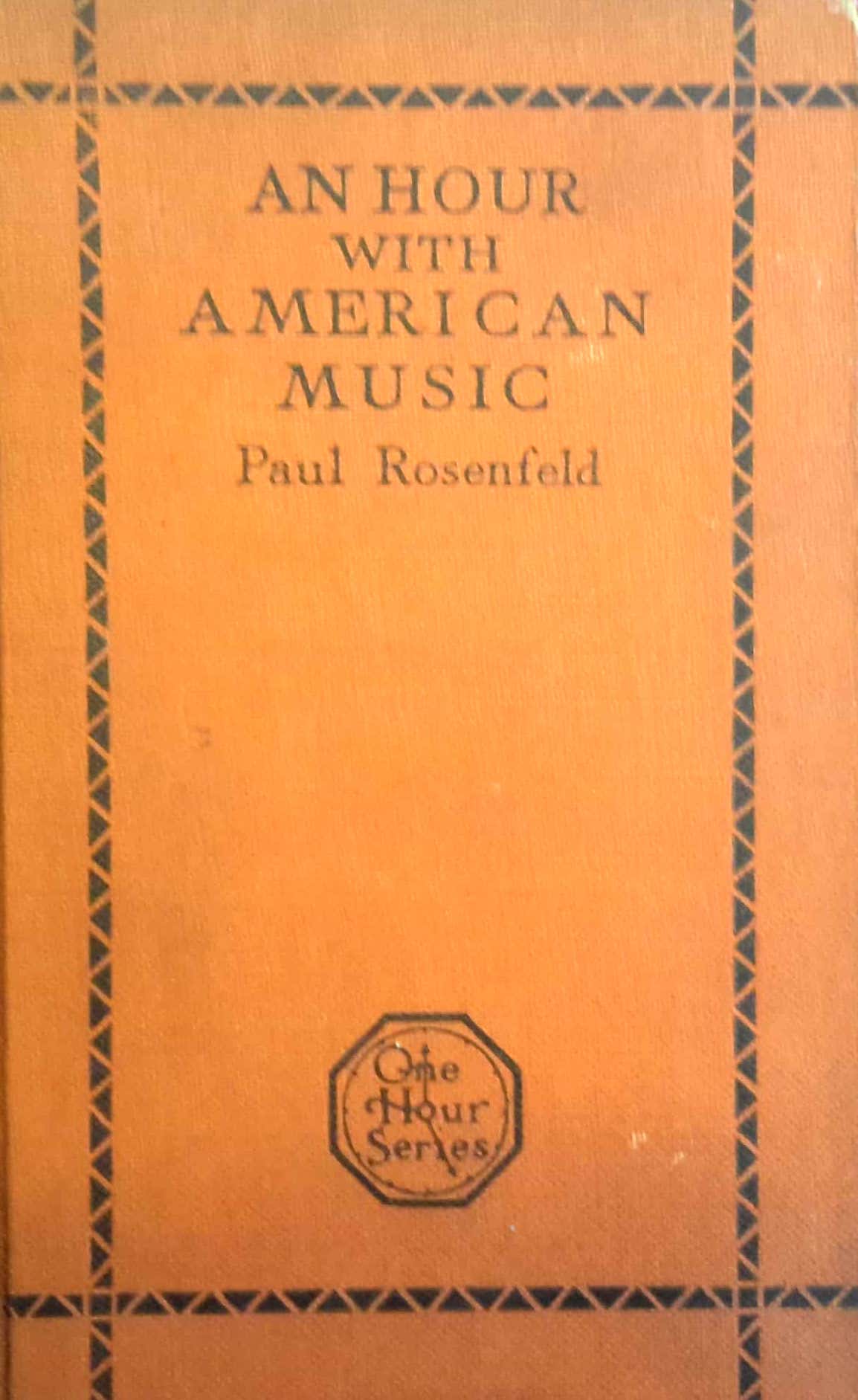 Rosenfeld’s subtle attempts to discredit music of Black Americans as well as utilizing subliminal suggestions relating to eroticism, worthlessness, sexual innuendo and drugs became the foundation for music racism in America. All this has been duly documented in the PBS series “The Devil’s Music” . Rosenfeld, as well as other critics of the time, warned of the dangers of listening to the saxophone and to jazz; they were particularly concerned of the effect on youth:

“Jazz’s first blare revives the lure of elysiums. Sparkling as a soda-fountain, the blissful region rises…”

So with all the above American history, it was only natural that the Nazis would extend this racism to their own advantage, combining images of Black musicians wearing Jewish stars, and playing the instrument which symbolized the height of impurity: the saxophone.

Perhaps we might chuckle at the absurdity of branding any instrument or musical style as something more than simply a curiosity.  However the racist American critics and German propagandists were dead serious. As Josef Skvorecky recounts in his book, the Germans followed through and enforced their restrictions.  The Americans were far more subtle (we are well familiar with the passive nature of “Northern Racism” vs. the more overt “Southern Racism”).

So, without stirring too much controversy, I would like to fantasize a bit. What if one day in Israel we read something like the following paraphrases of the German “rules”?:

1. “All musical ensembles are advised to restrict the use of the oud and to substitute for them the guitar, banjo or another folk instrument.”

2. “Strictly prohibited is the use of instruments alien to our national spirit. These include out of tuned instruments such as the kanun as well as all Arabic wind instruments which turn noble sound into a primitive out of tune barbaric Moslem yowl.”

One might laugh at the above absurdity, but the Germans were never laughing. Likewise, others in our midst are not laughing. How far are we from such absurd decrees? After recent attempts at Cultural Laws forbidding certain literature or plays to be read/presented, there IS cause for concern. There is also a strong possibility that a clearly racist party may be part of a future coalition here in Israel. Fiction? Can we afford to laugh?

Bonus: The Sounds of the Saxophone (listen if you dare!). Click links to hear music. 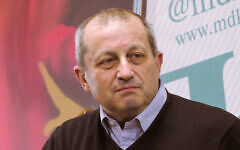