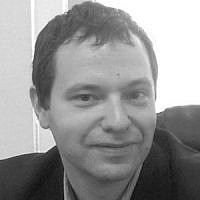 The Blogs
David Gurevich
Apply for a Blog
Advertisement
Please note that the posts on The Blogs are contributed by third parties. The opinions, facts and any media content in them are presented solely by the authors, and neither The Times of Israel nor its partners assume any responsibility for them. Please contact us in case of abuse. In case of abuse,
Report this post.

The innovative project, Ambassadors Online, is off to a strong start ▪ The students to challenge the BDS and deliver the message of co-existence and peace ▪ In crisis situations the students to launch a social media response room (press release)

What lies in common between a new repatriant from Venezuela, a Muslim Bedouin graduate student from the Galilee, a Jewish exchange student from Poland, and two students from the Druze community? The answer: A shared desire to improve Israel’s public image abroad. Last week, the second session of the Ambassadors Online (‘Shagririm Bareshet‘) program was launched at the University of Haifa. In this program, students explore the current issues and undergo “hands on” training in how to represent their country as unofficial ambassadors in the international arena.  The second session starts at a time when the so-called “Apartheid Week” takes place abroad – a platform used by BDS anti-Israel activists to recruit people on campuses for boycotting Israel. At the University of Haifa, the hopes are that their students will provide a suitable response.

“In the last decade there has been a growth of groups and organizations around the world who are acting for the de-legitimization of Israel.” explains Prof. Eli Avraham, academic head of the program. “The goal of Ambassadors Online is to provide students with the tools, utilizing new media channels, to cope with those trying to harm our global image.”

The University of Haifa is a pioneer in initiating a public diplomacy program which focuses on the Internet.  During the course of the semester, the program’s cadets will undergo intensive training.They will meet with senior diplomats and ambassadors, participate in workshops conducted by media professionals and journalists, and will even embark on a tour “Jerusalem behind the news”, with the goal of familiarizing themselves with the central issues that make up the headlines.  During a special weekend dedicated for developing leadership skills, the students will meet social entrepreneurs who initiated projects on the international stage, and immediately afterwards the cadets will begin the work on their own enterprises.

Although the University plans to send a delegation abroad to engage in international dialogues, most of the activity will focus on the digital realm.“The Internet allows anyone to have a conversation with audiences in distant countries,” explains David Gurevich, project founder and director. “I have Facebook friends from Germany, UK, and the United States, but along with them also friends from Pakistan, Afghanistan, and Tunisia, whom I met in conferences in Europe.  They ask questions about what is happening in Israel.  They read my posts.  We exchange opinions and for the most part they are starting to develop a friendly attitude towards Israel. This is the best way to combat the hatred as well as to share our society’s aspiration for peace and co-existence.”

At last week’s opening session, the 30 cadets, each of whom was hand picked to participate in the prestigious program, met each other for the first time. For each spot available a large number of candidates competed, and only thirty of them were lucky enough to join the ranks.  The students come from a variety of different backgrounds, and the resulting group is an accurate representation of the multicultural University: Jewish, Muslim, and Druze students who intend to stand for Israel, each in their own unique way.

“It is important for me to be in the program because it’s an opportunity to be a representative of my country and also to expand my horizons.” said Ayat Rahal, 23, a Muslim Bedouin student from Ramat Hayeb in the Galilee.  “I wish that the international community will hear about the shared life of Muslims and Jews in Israel, since in the world this is not widely known. In my perspective, here lies the true story of the State of Israel.”

The program has already achieved several accomplishments.  In the previous year, founders of the program were invited to attend a deliberation of experts at the Israeli Parliament, Knesset. During operation “Pillar of Defense” program members created a situation room, where they monitored the media for biased coverage and took part in the shaping of positive public opinion towards Israel.  Several of the program’s alumni have already had the chance to apply their training overseas as participants in various delegations.

The Ministry of Foreign Affairs welcomed the initiative.  “Power is shifting.  The tendency towards centralization of information and ‘monopoly’ is shifting towards the distribution of it in a ‘viral’ a way as possible,” commented on the opening of the program Mr. Yoram Morad, director of Digital Diplomacy Department at the Ministry.  “As accurate, reliable, interesting and relevant the information which the Ministry of Foreign Affairs supplies is, we still require partners with the desire to tell the story of our country.  The  ‘Ambassadors Online’ of the University of Haifa are exactly that.  Partners.  You were partners during times of trouble and we would be happy to have you with us during times of routine.  Well done.”

The cadet group of the second session will finish its training in June 2013.  The program operates under the auspices of The Elizabeth and Tony Comper Interdisciplinary Center for the Study of Antisemitism and Racism, The Dean of Students Office, Herzl Institute for the study of Zionism and History, The Student Union, and The ISEF Foundation.

Analyzing news reports from various sources online. The program includes workshops that will provide the students with ‘hands-on’ experience.
About the Author
David is a Fulbright Post-Doctoral Fellow in Harvard University and the founder of "Ambassadors Online" public diplomacy program.
Comments