No one who has witnessed the revolutionary changes that have taken place over the past few months in the Middle East can deny the importance of interfaith dialogue. With Israel enjoying newly established diplomatic relations with the United Arab Emirates, Bahrain, Sudan, and, most recently, Morocco, it is clear that the spirit embodied by the Abraham Accords is one of peace.

The change is simply miraculous.

Religious hostility can be overcome through dialogue when political leaders conclude that choosing a purposeful and beneficial future for the people they govern is better than using age-old grievances to unify a nation.

Once the political decision is made, religious leaders can follow suit, encouraging their followers to emphasize the more peaceful tenets of their faith over those teachings that have historically promoted hostility toward the other.

An interesting example of this phenomenon took place in November when a prominent scholar in Saudi Arabia declared that according to some Islamic sources, Al Aqsa Mosque (“the farthest mosque”) might not be in Jerusalem, but in Mecca instead.

This is a big deal, because if a significant number of Muslims conclude this is the case, the tension surrounding Jerusalem would be greatly reduced. People throughout the region could get on with their lives, no longer worrying about whether a Jew is praying on the Temple Mount, or Haram al Sharif.

Writing in the Saudi state daily newspaper ‘Okaz, Osama Yamani declared: “The lesson we learn from the differences between these [various] traditions and stories is that political issues were exploited for the sake of political events, issues and positions that have nothing to do with faith and worship.”

Implicit in Yamani’s line of argumentation is that one can be a faithful and dutiful Muslim and not insist on conflict with Israel or Jews. This is huge.

Maybe, after decades of fruitless struggle against Israel, a growing number of leaders in the Middle East have concluded that it’s time to update their worldview. If this updating continues, other theologians will do the same type of reexamination as Yamani to improve the prospects of people living together in peace. 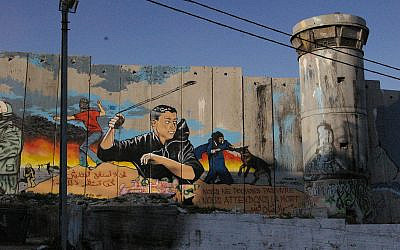 Anti-Israel incitement posted on the security barrier in the West Bank helps explain why the barrier is necessary. (Photo: Dexter Van Zile)

Sadly, the process of updating the worldview to achieve peace seems to be lagging in the Gaza Strip, which is under the control of Hamas, an organization that seeks Israel’s destruction, and the West Bank, which is under the control of the Palestinian Authority, an organization that claims a Palestinian Arab right to self-determination while refusing to acknowledge the Jewish right to self-determination. Both Hamas and the Palestinian Authority have engaged in a decades-long process of anti-Israel demonization, with disastrous results for the people they govern. Christian peacemakers don’t want to admit it, but a sea change needs to take place in Palestinian society for peace to exist in the Holy Land. Palestinian elites need to stop using hostility toward Israel and Jews as a method of unifying their followers.

They need to stop using anti-Jewish incitement as a method of distracting the Palestinians from the opportunities for peace and statehood squandered by Yassir Arafat and Mahmoud Abbas over the past two decades. Once Palestinian political elites conclude that it’s in their interest for this incitement to stop, the theology will follow suit.

A similar process took place in Europe after the Holocaust. In the aftermath of World War II, which cost 60 million people their lives, Christians concluded that it was time to come to grips with the anti-Judaic elements of their theology and accept the possibility that maybe there was still room in God’s economy of salvation for the continued existence of the Jewish people.

The great religious lesson in the 20th century was that Christians could adhere to their faith without demonizing the Jews. In fact, they realized that demonizing Jews was in fact a betrayal of the faith.

Sadly, some Christians, backslid on this realization when dealing with conflict in the Middle East. In their desire to express concern for Arabs and Muslims in the region, they tolerated, and in some instances trafficked in, antisemitic commentary about the Jewish state. They threw Israel and Jews back onto the stone pavement of judgment as an act of solidarity with Muslims and Arabs. They published books that trafficked in naked falsehoods about the Jewish state. They told blatant falsehoods about Israel at their national assemblies.

They tolerated commentary that portrayed Israel as a Christ-killing nation.

They falsely portrayed the modern state of Israel as if it were oppressing Christians just as the Romans and the Jewish establishment oppressed Jesus and his followers in first-century Jerusalem.

Christian peacemakers did these things in the name of “interfaith relations” and “reconciliation.”

And now, by some miracle, Arab and Muslim leaders in the region are concluding that they no longer need to use Jew-hatred as a unifying political agenda, despite the willingness of some Christians in the West to tolerate or turn a blind eye to such behavior.

Dexter Van Zile is Shillman Research Fellow for the Committee for Accuracy in Middle East Reporting and Analysis (CAMERA).