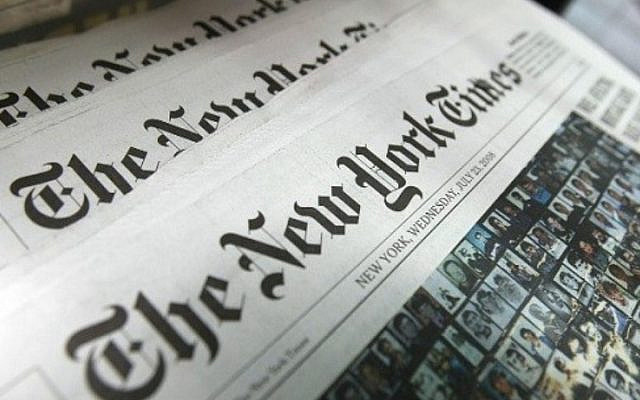 In this century so far, The New York Times has published opinion columns by the bloody Taliban deputy leader Sirajuddin Haqqani, by PLO Terrorist-in-Chief Yasser Arafat, by crazy Libyan dictator Muamar Gaddafi, by theocratic Iran´s foreign minister Mohammad Zarif, by Russian authoritarian president Vladimir Putin, by populist Turkish premier Recep Tayyip Erdogan, as well as by Palestinian convicted criminal Marwan Barghouti. Rarely has any of these raised an objection from the Times staff (I have found only one lamenting tweet concerning the Haqqani column). Certainly nothing compared to the scale of the outraged reaction to a recent column by Arkansas Republican Senator Tom Cotton. That men with blood on their hands got a free pass at the Times opinion page whereas a mere political opinion of an elected senator elicited the moral fury of much of the newspaper’s journalists, says something about the organizational culture prevailing at the Times.

Senator Cotton dared to call for sending soldiers to contain the violent protests that were shaking the entire country, due to the inability of the police to do so, after the reprehensible murder of African-American George Floyd by a white policeman in Minnesota. He did not call for a general suppression of the peaceful protests, but for a reinforcement of containment against the looting, arson, beatings, vandalism and killings that several of the protesters were carrying out. His view was shared by 58% of Americans, 48% of Democratic voters, and 37% of African-Americans according to a Morning Consult poll. A 2019 Gallup poll showed that 73% of Americans trust the military. In the midst of the hubbub, twenty-three states had already summoned the National Guard, including several states governed by Democrats, as Noah Rotham noted in Commentary. The idea had previously been raised by President Trump, had been implemented by past presidents, and is a legal measure.

The same people who did not hesitate to justify the violent excesses of the protesters (and who completely ignored their Covid-19 social-distancing transgressions) felt physically threatened by an editorial column. “Running this puts Black @nytimes staff in danger” newspaper employees tweeted en masse. The journalists union defined it as “a clear threat to the health and safety of the journalists we represent.” The next day several employees did not show up for work. Opinion editor James Benett defended his decision on the basis of a necessary debate of ideas, especially divergent ideas. The publisher of the Times A.G. Sulzberger endorsed him -“I believe in the principle of openness to a range of opinions, even those we may disagree with, and this piece was published in that spirit”- until he stopped doing so. “We have concluded that the essay did not meet our standards and should not have been published,” said an editor’s note attached to Mr. Cotton’s column. By the week´s ending, James Bennet was fired.

This moral riot occurred at a newspaper that last year promoted an investigation titled “1619 Project” that basically postulates that the United States was conceived in sin of slavery. It was severely criticized by various historians for its alleged mistakes and distortions, but that is not the point. What is relevant here is that The New York Times is a progressive daily highly sympathetic to African Americans. None of that mattered to the angry neo-Stalinists, who longed for heads to roll instead of debating ideas. Rather than challenge Senator Cotton’s views and set out to confront him intellectually, they barricaded themselves in their ideological fortress, from where they comfortably protested. “There is a spirit of ferocious intellectual intolerance sweeping the country and much of the journalistic establishment with it,” lamented a conservative Times columnist.

The shake-up at the Times was followed by other layoffs. The editors of The Philadelphia Inquirer newspaper and Bon Appétit magazine were guillotined for the crime of disagreeing with the ideological fashions of the moment. The Philadelphia Inquirer case is especially serious. The newspaper’s historic editor and Pulitzer Prize winner was cast for the title chosen for an op-ed: “Buildings matter, too” written by an architect concerned about the ongoing building devastation (an obvious allusion to the “Black Lives Matter” movement, the engine of the protests). “On matters deemed sacrosanct -and today that includes the view that America is root-and-branch racist- there is no room for debate,” observed an editorial in The Wall Street Journal, “You must admit your failure to appreciate this orthodoxy and do penance, or you will not survive in the job.”

This is known in the United States as cancel culture. Thus defines it the digital dictionary of pop culture: “Cancel culture refers to the popular practice of withdrawing support for (canceling) public figures and companies after they have done or said something considered objectionable or offensive. Cancel culture is generally discussed as being performed on social media in the form of group shaming.” The social justice warriors reaped other triumphs. HBO Max discontinued the classic 1939 film Gone with the Wind for its alleged racial insensitivity, even though it won an Oscar for a black actress for the first time. This happened after the Los Angeles Times published a column by John Ridley, screenwriter of the award-winning film Twelve Years a Slave, in which he asked exactly for it. Paramount canceled the reality show Cops, which portrays the daily activities of police officers in the United States. Calls to defund the police soon emerged. Statues of slavers and controversial figures were removed: among them that of former mayor and police commissioner Frank Rizzo, in Philadelphia; the statue of Edward Carnack, a former American senator, in Tennessee; a 1889 statue honoring Confederate soldiers in Virginia; the 115-year-old statue of the Confederate sailor Charles Linn, that of the Confederate General Robert E. Lee, and that of the Confederate Admiral Raphael Semmes, all three in Alabama. In Minneapolis, a statue of Christopher Columbus was thrown to the ground. The trend crossed the Atlantic Ocean and reached Belgium and the United Kingdom, where even a statue of Winston Churchill was defaced.

As the angry mob acted, there was a boomerang effect: Senator Cotton’s op-ed became the most widely read in the Times the week of its publication, and DVD or Blue-Ray copies of Gone with the Wind sold out in Amazon.

The cause of anti-racism is obviously laudable. The problem here is the neo-Stalinist excesses that are taking over it. A motto of these protests is “silence is violence.” Apparently, no one has the right to remain silent. Indifference is unacceptable. Solidarity is mandatory. You must speak up, protest, and demand. Of course, you must express yourself in favor of the prevailing dogma. No questions asked. Otherwise, the motto will take a sinister turn and you will be silenced –maybe, with violence.

About the Author
Julian Schvindlerman is an Argentine writer and journalist specializing in Middle East affairs. He lectures on World Politics at the University of Palermo and is a regular contributor to Infobae and Perfil. He is the author of The Hidden Letter: A History of an Arab-Jewish Family, Triangle of Infamy: Richard Wagner, the Nazis and Israel; Rome and Jerusalem: Vatican policy toward the Jewish state; and Land for Peace, Land for War.
Related Topics
Related Posts
Comments