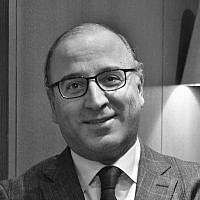 The Blogs
Hicham Aboutaam
Apply for a Blog
Advertisement
Please note that the posts on The Blogs are contributed by third parties. The opinions, facts and any media content in them are presented solely by the authors, and neither The Times of Israel nor its partners assume any responsibility for them. Please contact us in case of abuse. In case of abuse,
Report this post.

In my career I have seen countless masterpieces and archaeological findings; so many of my favorites are housed at the Israel Museum. As one of the world’s leading art and archaeology museums, home to more than 20-acres of collections, antiquities, and artifacts, the Israel Museum is truly a phenomenal place. Everything about the museum’s campus is designed to enhance the visitors’ experience and appreciation of the treasures contained in each gallery. This is my list of the six “must-see” pieces of art on your next trip to the Israel Museum. 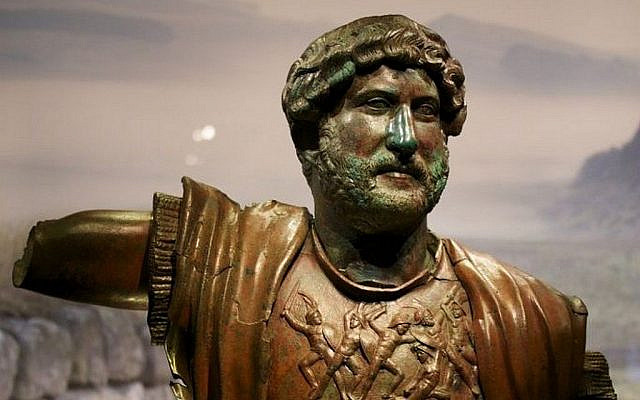 Hadrian, also known as Caesar Traianus Hdrianus, admired Greek civilizations and was particularly fond of Greek philosophers; he was the first Roman emperor to sport a beard, initiating a tradition among subsequent Roman emperors. He was the most well-travelled emperor, spending more than half of his 21-year rule traveling the expansive empire and its provinces. Coin collectors are keenly aware of Hadrian’s “travel series,” coins that depict his elegant portrait on the obverses while the reverses depict different historical personifications for the cities, provinces, and territories he visited. Hadrian reigned over 1,800 years ago, but the majesty of the bronze bust sculpture at the Israel Museum is timely and inspiring.

The bust was found in Tel Shalem in northern Israel and is one of only three bronze statues of the Roman emperor to survive from antiquity. In 2015, in honor of its 50th anniversary, the Israel Museum hosted the other two sculptures—one from the British Museum and one from the Louvre in Paris—in a side-by-side showcase.

Some historians include Hadrian in the list of Five Good Emperors, celebrating him as an impartial ruler, an exemplary diplomat, and a great builder of the empire. Jewish history, however, maintains Hadrain as one of the cruelest and most vicious rulers. He suppressed the Bar Kochba revolt of 135, massacred hundreds of thousands of Jews, made Jerusalem a pagan city, and outlawed many religious practices. The bust housed at the Israel Museum is eerily natural in its lifelike presentation of Hadrian. He is shown with an exquisite cuirass armor plate, complete with a military combat scene on the chest. His age is depicted by a fuller beard, softer lines, and thoughtful gaze even though he appears ready for battle. His earlobes are creased by (what we now know to be symptoms of) coronary artery disease, the ailment that likely killed Hadrian at the age of 60. While scholars are not sure where exactly the bust was manufactured, they (and I) agree that it is one of the most impressive and realistic depictions of the contested ruler. 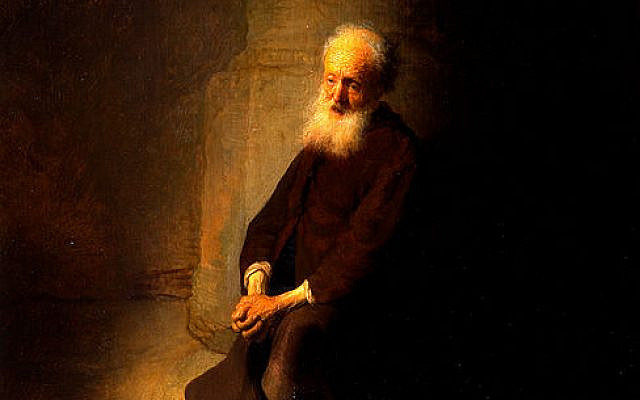 This painting by Rembrandt depicts the apostle Peter in his Jerusalem jail cell following his arrest by King Herod. A spill of soft, yellow light encompasses Peter, leaving much of the rest of the painting opaque and dark. But his saintly attributes are evident: he has two large metal keys to the kingdom of Heaven given to him by Jesus. St. Peter’s hands are deformed by his previous career as a fisherman. He kneels in prayer, but also in utter anguish at his fate. He remains unaware of the Angel- hinted by the unsourced light- waiting to enact a miraculous escape. The saint’s humanity is etched into his face and hands; the halo of illumination conveys holiness. This piece is a phenomenal representation of Rembrandt’s ability to use light, shadow, posture, and poise in a revered and realistic way. His depiction of nuanced states of mind, complex emotions, and mystical spirituality are thought provoking and awe-inspiring. 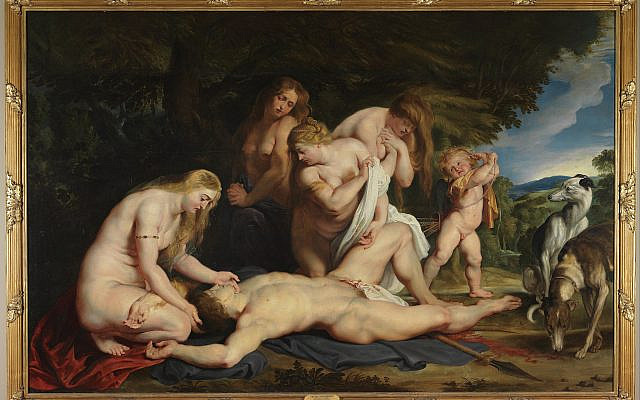 Sir Peter Paul Rubens, a Flemish Baroque artist, travelled all around the world in the service of kings and princes. This massive painting depicts the story of Adonis’s death as detailed in Ovid’s Metamorphoses. Adonis, the god of veneration, is fatally wounded by the god Ares, disguised as a wild boar. Venus tragically discovers the body of her young lover in the mountains of Lebanon. Adonis’s blood flowed into the river, coloring it red and resulting in it being named the Adonis River. Every February the river flows red, like blood, because of the soil washed off the Afka grotto.

Despair and devotion come together in this piece, with three sobbing Graces and a crying Cupid watching over the sad scene. Two dogs are on the right of the picture stand tranquil as they sniff Adonis’s blood in the only corner of the picture which includes natural blue skies and flourishing green nature. Even as the divine Venus, known to be the loveliest of all the goddesses, is beset by grief and pain, Rubens reminds the viewer that life and nature carry on. His perspective sends a prescient message which transfixes me each time I see this piece. 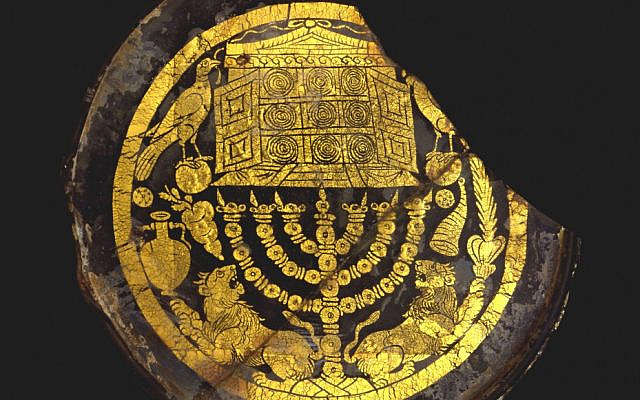 This small 11-centimeter glass disc shows images of the Temple, a Menorah in its center surrounded by lions and topped by the ark protected by guardian birds. The depiction, painted on the base of a drinking cup, is one of the earliest objects with Temple related imagery found outside of Israel. Beyond its beautiful detail and reverent iconography, the glass and gold disc has an impressive historical story that only enhances its splendor. It was buried in Roman crypts 1,700 years ago, stored in the castle of a Polish countess, pilfered by the Nazis during WWII, auctioned on Vienna’s antiquities market, reclaimed by the original owners, and then sold again. It is displayed next to another priceless Roman disc, also with Jewish symbols, and tells a story of exile, memory, tradition, longing, and perseverance. 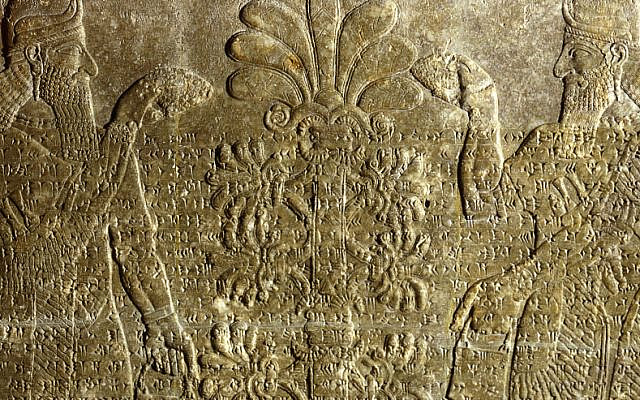 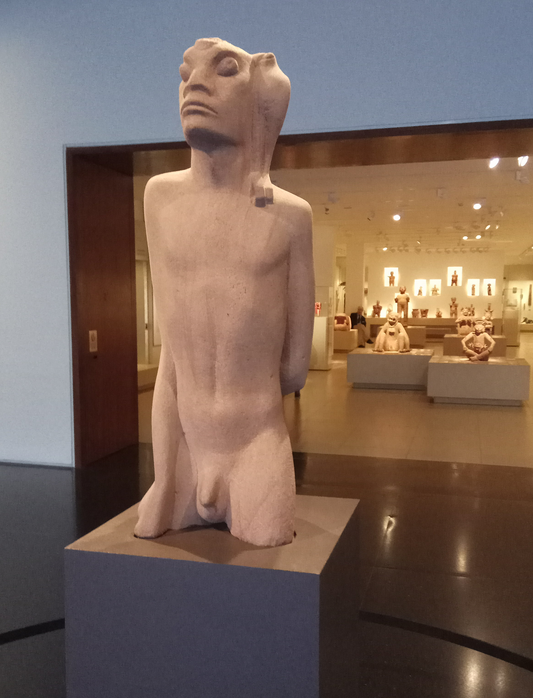 The images on this Assyrian Wall relief, an abstract date palm flanked by two winged genies with human heads, appear on many walls of the North-West Palace of King Ashurnasirpal II. While there is no textual or verbal evidence to formally classify the symbolism of this piece, the repeated inclusion of certain visuals, like fruiting palms and mystical beings, suggests that it was meant to convey opulence, abundance, and riches. When the king built his home in Nimrud, the new capital of his country, he used these images to portray his wishes for his entire kingdom. This particular slab is spectacular for three reasons: it is relatively small, it includes a twenty-six-line cuneiform inscription of the regional growth of Assyria etched from the shoulder to the mid-calf of the genies, and it has large signs.

From its creation in 1939 to this very day, Yitzhak Danziger’s Nimrod captivates and fascinates visitors for its detail, dichotomy, and direction. Nimrod, the biblical figure revered as a “a mighty hunter before the Lord,” but whose name suggests rebellion and descent, is depicted in the Talmud as a despicable idolater who constructed the Tower of Babel in an attempt to dethrone God. In ancient Near Eastern mythology, Nimrod is a persona with extreme might and divine capabilities. Danziger portrays him as a man-beast for whom body and tools have become one: his bow is his backbone. The hawk on Nimrod’s shoulder is taken from Egyptian art, connecting the sculpture to the pagan world of Nimrod’s era. He is intentionally portrayed without legs, and is created in red-hued sandstone, to evoke archaeological history and juxtapose ancient findings with modern techniques. Nimrod’s figure is a stark contrast to the accepted portrayals of Jewish-Biblical figures of the time. He is the alternative, newer representation of an “Israeli,” a person and a people steeped in history yet constantly forging a new, individual path.

Israel has always been a culturally rich and religiously diverse land. It is thus befitting that the Israel Museum serve as the primary showcase for enthralling and enchanting art, archaeology, and artifacts. I am particularly fond of the above-listed objects as they offer an intimate portrayal of the beliefs, lifestyle, and customs of ordinary people, ruling kings, and curious figures. These—and all the art work at the Israel Museum—are all a hearkening tribute to important historical events, cultural accomplishments and influences, societal innovations and adaptations, and profound creativity.

About the Author
Hicham Aboutaam is the co-founder of Phoenix Ancient Art and the owner of Electrum, the exclusive agent in New York. He grew up surrounded by antiquities and built a strong passion for gems and seals at a very young age. In addition to working with renowned museums and established collectors, Hicham enjoys educating and advising aspiring collectors.
Related Topics
Related Posts
Comments