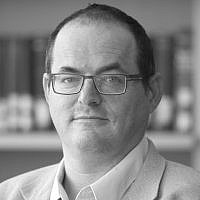 The Blogs
Avi Novis-Deutsch
Apply for a Blog
Advertisement
Please note that the posts on The Blogs are contributed by third parties. The opinions, facts and any media content in them are presented solely by the authors, and neither The Times of Israel nor its partners assume any responsibility for them. Please contact us in case of abuse. In case of abuse,
Report this post.

Fifteen years ago, I conducted my first Jewish wedding ceremony. It was very exciting and nerve-racking. I met with the couple a few times and together we planned their ceremony within the bounds of halacha, Jewish law. I was lucky enough that, as part of my studies at the Schechter Rabbinical Seminary, I learned not only the religious laws of the ceremony, but also how to prepare for a meeting with the couple and how to design a ceremony that adheres to Jewish law while also remaining personal and relevant.

Being a rabbi who officiates at weddings, I today learned that I must prepare an overnight bag that I can take with me in case I am arrested. When the police knocked on the door of my friend – a Conservative rabbi and graduate of the Seminary – early in the morning in order to summon him for questioning, they did not call him to schedule the interrogation in advance; rather, they acted as though he were a clear and present danger to the general public. It was the Religious Court of the Haifa Rabbinate who requested that the police bring him in for questioning and this is unfortunately how the Israeli Police handles a dispute between rabbis.

The law in Israel stipulates that only the Religious Council is permitted to conduct weddings but this is a law that has never been enforced and, in fact, the State Prosecutor recently announced that it would not act to enforce it. Thus, the decision of the police to disturb the sleep of Rabbi Dov Haiyun in order to take him in for questioning is unbelievable and incomprehensible.

Over the last 15 years of my rabbinical career, I have officiated at more than a few wedding ceremonies. The couples who choose to marry with me always understand that their wedding has no legal status in Israel. They nevertheless move forward with it because they want a more personal ceremony and in many cases because they do not want the Rabbinate to play any part in a day so personal and exciting. The Rabbinate unfortunately often acts as an alienated establishment and its representatives moreover do not seem to understand that a wedding is first and foremost a meaningful and personal ceremony, as well as an event with both civil and religious legal status.

Rabbi Dov’s arrest took place on the eve of Tisha B’Av, during the days in which the Jewish people mourn the destruction of the Holy Temple. According to tradition, the Second Temple was destroyed because of baseless hatred. An early morning arrest gives me a strong impression of baseless hatred and of an inability to properly handle disagreements.

When I decide to officiate at a couple’s wedding, I do it because I hope and believe that I can help them to construct a meaningful Jewish moment. I do it in order to allow people to connect to their Judaism and be active participants in their special day. As of today, I am doing it with the knowledge that I will likely one day be arrested and I am prepared for this as an act of civil disobedience.

The connection between Jews in Israel and Judaism is constantly being challenged. Many of those considered to be representatives of Judaism in Israel are doing it a disservice. I am attempting to do it justice based on my own understanding and it is to this aim that I have dedicated my life and to which the Rabbinical Seminary that I head trains its students.

We strive to enable the Jewish public in Israel to feel at home with their Judaism and to choose their own Jewish path. We believe that our personal choices can serve as an educational model, but they must be attentive to our interlocutor’s worldview and we should be open to learning from it.

This is how I and my students conduct wedding ceremonies: We are obligated to Jewish religious law and simultaneously to the couple getting married, and we will continue in this manner. Unfortunately, in Israel in 2018 this can be grounds for arrest. However, only our willingness to continue to do this will bring about change, soon and with God’s help.

Every year, the number of couples who decide against getting married through the Rabbinate rises. Unfortunately, many of these cases demonstrate a sense of alienation from Jewish identity and Jewish culture. I am hopeful and faithful that our work can help many people to once again feel at home.

About the Author
Rabbi Avi-Novis Deutsch is Dean of the Schechter Rabbinical Seminary in Jerusalem, which trains Masorti/Conservative spiritual leadership for Israel and the world.
Comments