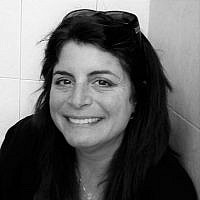 The Blogs
Brenda Stein Dzaldov
Apply for a Blog
Advertisement
Please note that the posts on The Blogs are contributed by third parties. The opinions, facts and any media content in them are presented solely by the authors, and neither The Times of Israel nor its partners assume any responsibility for them. Please contact us in case of abuse. In case of abuse,
Report this post.

Last week, my daughter moved again. This time, she moved from Herziliya to Tel Aviv.

Have you heard of the neighbourhood called Florentin in Tel Aviv?

No? I was in the same boat as you until about three weeks ago.

In September, 2017, my daughter moved off of her army base (move #1), then out of our cousin’s house (move #2) to an apartment in Herziiliya.  She chose Herziliiya because it seemed logical; that’s where she goes to school.  The place seemed okay when she found it, but in reality, it was a dump.  When I saw it in October of last year, I actually cried.  It was dark and dirty, her housemates were mostly absent, and the kitchen wasn’t useable.  It did not feel like home, and being on her own in Israel, it was important to us that she find a place that she could come “home” to.

So, she and I started searching for a place for her to move to (move #3 in 5 months).  I believe I mentioned in my first blog that I have moved a grand total of 4 times in my whole life, but that is neither here nor there.  In this way, she’s not like me.

This is what I learned from the process.

So, my daughter and I went on an apartment hunt. We searched and searched online, sharing links and taking virtual tours.  She went to see a lot of cramped, windowless apartments in and around Tel Aviv.  Finally, we found a place that she liked, but when it came down to it, the owner claimed that the price he had quoted us (which was in Canadian dollars) was actually in American dollars.  Then, when we decided she would take it anyways, he claimed that inflated price was not for the apartment she saw, but for another teeny, tiny apartment that didn’t even have a cupboard for her clothes.  After all that searching, we were pretty disappointed.

Then, the very next day, I woke up to an exciting text.  With the help of some very good people in Israel, she found a one-bedroom apartment in Tel Aviv.  It sounded too good to be true.  The price was right.  The kind folks moving out were willing to sell some of their furniture for the bargain price of 4000 shekels, and that just left her needing another 4000 shekels for a microwave, toaster oven, coffee table and sundries.  At this point, I deal with these amounts of money the way I dealt with sending 3 kids to Jewish Day Schools in Toronto – I just try not to think about it too much and keep writing cheques.

Then, I found out that the apartment is in Florentin, and Florentin is in South Tel Aviv.

According to the Times of Israel, the majority of the 60,000+ migrants from Africa, most of them Eritrean and Sudanese, live in South Tel Aviv, specifically in a several-block radius around Tel Aviv’s Central Bus Station and Levinsky Park, which was even closer to the apartment than the beach. I knew that poverty and crime are a big problem in this area.  When I was in Israel a couple of years ago for the Toronto Israel Engagement trip, we toured the area with armed escorts.  I’m not passing judgment on the situation, but the prospect of having my daughter live in the most crime-ridden area of a country that spends a fifth of their budget on defense made me suddenly realize this might not be a good idea.

It also dawned on me why we were so lucky to find a semi-affordable place in such a great spot in Tel Aviv.

So, I gently asked her about it.  She cheerfully told me that Florentin is in South Tel Aviv but it’s an up and coming, chic, hipster neighbourhood.  It’s the place to be, apparently.  True, it is a quick walk from Levinsky park, but in a totally different neighbourhood.  Wikipeida confirmed it. Florentin is now becoming known as a hip, cool place to be in Tel Aviv with bars, coffee houses, great restaurants, parties and galleries.

So, on February 26, in between writing exams and preparing for a delegation abroad to share her aliyah story, she sublet her apartment in Herziliya (that experience is another blog) and, on March 1, she moved.  Her boyfriend and her cousins were working, so she packed up and moved completely on her own.  The movers cancelled at the last minute and her car’s battery died just as she was about to follow the moving truck to Tel Aviv, but she managed to move anyways.  That kid is amazing to me.

And now she lives in South Tel Aviv, in a one-bedroom apartment with a walk-out, big windows and her own little kitchen.  She’s in heaven, and the place feels like home to her.  I’m thrilled, and I have learned a little more about the city and country my daughter calls home.